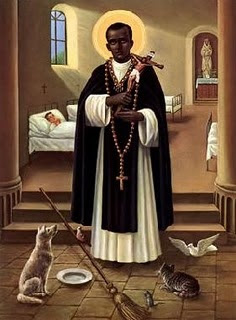 There's so much we can learn from saints......finding the Lord and then walking with him; their examples of holiness and heroic virtue; how they bore the crosses of life and took advantage of them as an opportunity to grow closer to God and offer them up as a dynamic prayer for an intention of your choice; how they handled the temptations, tests, and trials of life; how they kept the faith and trusted in God even when everything seemed to be going wrong and often reaped great fruit either now and/or after their deaths. If they can do it, by the grace of God, so can we!!! Let's look at St. Martin de Porres, a Dominican Mystic.
He maintained an austere lifestyle, which included fasting and abstaining from meat. Among his many mystical gifts were levitation, bilocation, aerial flights, miraculous knowledge, instantaneous cures, and an ability to communicate with animals. Martin was deeply attached to the Blessed Sacrament. One night while deep in prayer in front of it, the step of the altar on which he was kneeling caught fire. Throughout all the confusion and chaos that followed, he remained where he was, unaware of what was happening around him.

He was aided by his close friend, St. Rose of Lima, who respected his penances and labors. St. Thomas Masias was also a good friend of St. Martin. It is unique for a country to have three saints who were contemporaries and knew each other.

When an epidemic struck Lima, there were in this single Convent of the Rosary sixty friars who were sick, many of them novices in a distant and locked section of the convent, separated from the professed. Martin is said to have passed through the locked doors to care for them, a phenomenon which was reported in the residence more than once. The professed, too, saw him suddenly beside them without the doors having been opened. Martin continued to transport the sick to the convent until the provincial superior, alarmed by the contagion threatening the religious, forbade him to continue to do so. His sister, who lived in the country, offered her house to lodge those whom the residence of the religious could not hold.

St. Martin's love was all-embracing, shown equally to humans and to animals, including vermin, and he maintained a cats and dogs hospital at his sister's house. He also possessed spiritual wisdom, demonstrated in solving his sister's marriage problems, raising a dowry for his niece inside of three day's time, and resolving theological problems for the learned of his Order and for bishops.

Martin was known to the entire city of Lima. Word of miracles attributed to him in his work had made him known as a saint throughout the region.

In holy pictures such as the one above, he is pictured with a broom while feeding a cat, a rat, and a dog, all getting along in harmony and eating from the same plate. Thus when enemies are re-conciliated or at least talking to each other in the same room, Peruvians call it, “El milagro de San Martin” or the miracle of St. Martin. He is also pictured with a broom, since he considered all work to be sacred no matter how menial.  Let us pray with St. Martin for reconciliation among enemies throughout the world, especially among nations and religions.
Incidents of Bilocation. This brother had always wanted to be a missionary, but never left his native city; yet even during his lifetime he was seen elsewhere, in regions as far distant as Africa, China, Algeria and Japan. A slave, who had been in irons when captured in Africa said he had known Martin there when he came to relieve and console many like himself, telling them of heaven. When later the same slave saw him in Peru, he was very happy to meet Martin again and asked him if he had had a good voyage; only later did he learn that St. Martin had never left Lima.
When a merchant from Lima doing business in Mexico fell ill, he said aloud: “Oh, Brother Martin, if only you were here to care for me!” and immediately saw him enter his room. And again, this man did not know until later that he had never been to Mexico
When Martin lay dying in Rosary Convent on November 3, 1639, the viceroy, the count of Chichon, knelt by his bed, seeking Martin's blessing. After he died, the miracles and graces received when people prayed for his intercession multiplied. His body was exhumed after 25 years and said to be found intact and exuding a fine fragrance.

Martin, who is the patron of interracial justice, was canonized by Blessed Pope John XXIII (r. 1958-1963), becoming the first black saint in the Americas in 1962, 323 years after his death, just at the time when the civil rights movement was beginning to heat up. Martin Luther King gave his famous “I Have a Dream” speech at the Lincoln Memorial in Washington the next year in August 1963 before thousands.  Let’s ask for his intercession for interracial harmony since he is the son of a Spanish knight and a freed slave.  He was ridiculed for his interracial illegitimate birth.

Today, Martin is commemorated by, among other things, a school building that houses the medical, nursing, and rehabilitation science schools of the Dominican University of Santo Tomas in the Philippines. A program of work is also named after him at the Las Casas Institute at Blackfriars Hall, University of Oxford. He is also the titular saint of the St. Martin de Porres Marianist elementary school in Uniondale, New York. He is also included in the Calendar of Saints of the Church of England on November 3. More than one church in the United States was named after him, including the two below.

Posted by Paul Sebastian at 9:56 PM

Email ThisBlogThis!Share to TwitterShare to FacebookShare to Pinterest
Labels: Saints and Heroes