(259) A Veteran Speaks Out on Patriotism and Wokism......... By Deacon John V. Sebastian Sr. in His Veterans Day Homily 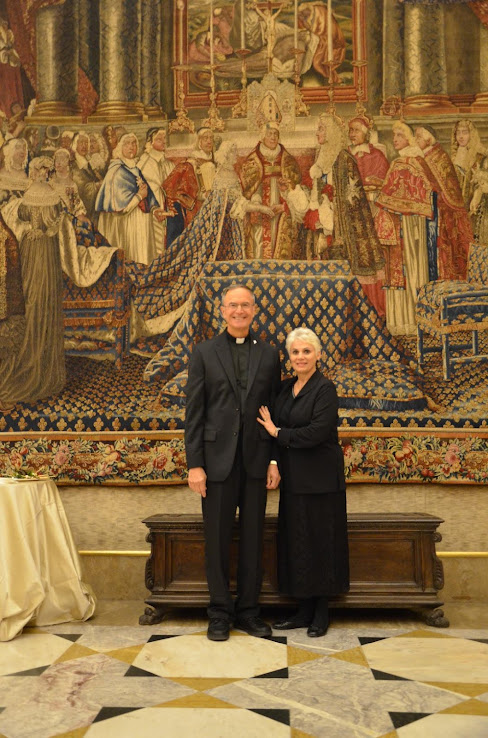 Deacon John V. Sebastian Sr., a retired investment banker, with his wife Kathleen in Rome in 2012.

The following is the text of the homily of Deacon John V. Sebastian at St. John the Evangelist Church in Naples, Florida on Veterans Day, November 11.  Deacon John, a veteran himself, honors his fellow veterans and relates their patriotism to Wokism which is attempting to rewrite American history.

To view Deacon Sebastian’s acclaimed and extensively forwarded Veteran’s Day Homily go to https://vimeo.com/644775850. To skip the entrance procession of the Knights of Columbus, music, the colors, and the beginning of Mass, go directly to the 42 minute mark for his reading of the Psalm and the Gospel.  His 8 minute homily begins at the 46 minute mark.

One comment: “Again, I want to thank you for the absolutely outstanding homily this morning at our Veterans Day Mass.  These words were so perfectly on point and needed to be said and heard.  I will be sharing the link to this Mass video with many of my friends and they will doubtless move it forward.”

We give special recognition to the military on two occasions every year, Veterans Day and Memorial Day.  Memorial Day is the more solemn occasion because we honor those who have given the ultimate sacrifice, their lives.  Veteran’s Day used to be called Armistice Day; it was first celebrated exactly 100 years ago on November 11, 1921.  Armistice Day was declared to commemorate the ending of the “war to end all wars,” that is, World War I and the millions of lives lost in that war.

Since then, of course, tragically, World War II was even worse; sadly, that was followed by the Korean War, the Vietnam War, and most recently Panama, Beirut, Somalia, Afghanistan, Iraq, and other conflicts.  Armistice Day, then, was changed to Veteran’s Day.

In particular, I remember being in East Berlin, seeing the Berlin wall, the oppression on their side of the wall and true freedom on our side that my affection for my country grew.  Noting the years of my military service, I am always moved by a visit to the Vietnam Memorial in Washington, and the 59,000 names inscribed in the wall.

As I grow older I have become more patriotic.  I love our country, especially the principles espoused by the declaration of independence: life, liberty, and the pursuit of happiness.  I achieve each of these with my own priorities in life: God, Family, Country.

Over the last few years, it saddens me to see how so-called “woke” or “progressive” politics and the cancel culture have attempted to wreck our country.  They are judging our founding fathers, not for the good they’ve done, but their failure, in our 21st century eyes, to be perfect.  Statues to Christopher Columbus, George Washington, Thomas Jefferson, civil war generals, and many others have been removed from their pedestals.

Even Abraham Lincoln, in my view, our greatest president, has been castigated by the cancel culture.  Although Lincoln was a strong abolitionist and authored the Emancipation Proclamation, it seems his great sin was to prioritize the preservation of the union over the immediate emancipation of the slaves.  The wokes have demanded removal of statues and his name on schools, streets, etc.

Most recently has been the condemnation of Father, now Saint, Junipero Serra, in California. He is being vilified for his evangelization efforts because the cancel culture is projecting their perfect standards of woke behavior in 2021 400 years onto the past.  He wasn’t perfect but he was still a good man who fought for indigenous peoples’ rights.

Fr. Serra lived in a very cruel time but he treated the indigenous peoples with dignity.  He initiated 21 missions in California that spread Christianity and education to the masses.  In one of those missions, Los Angeles, the cancel culture has succeeded in removing his presence from the park system.  That is ridiculous.  Do you know that when he was 60 and ailing, Father Serra marched 2000 miles to the Territory Governor in Mexico City to demand a bill of rights for indigenous people?  Later, 20 American Indians had been sentenced to death for their attack on Mission San Diego.  Father Serra intervened saying that these people were deprived of their rights.  Eventually, they were all freed.  The saint was ahead of his time.

I long for my fellow citizens to reject the views of the far left and of the far right.  I long for a return to civility in political discourse.  I may disagree with what you say, but I respect your right to be heard, and do not hate you for the views that you have.

Let the love we share for our country help enact laws which respect our freedoms and our belief in the sanctity of life.  Sanctity of life, to me, includes opposition to abortion and euthanasia and the death penalty, but also love for our fellow human beings, especially the poor and vulnerable.  Remember Our Lord’s commandment to his disciples at the Last Supper: “Love one another as I have loved you.”   We all need to act like we believe that Jesus’ words are true and binding.

You can help to change things.  First of all, be proud to be Catholic.  Be proud to be patriotic.  Did you know that because you are a veteran you are entitled to salute the flag in civilian clothes?  So, do it.  Display the flag.  Vote.  Encourage and educate your children and grandchildren and your friends in our history.  Teach them the horrors of fascism, socialism, and communism.  Show them your patriotism.  Encourage theirs.  Lead by example.

Father Tom and our priests and staff here at St. John’s are pleased to honor our Veterans and their loved ones today.  Thanks for being here.  Thank you for your service.  I especially ask you to support and pray for our many veterans who are afflicted physically, mentally, and spiritually.  May God bless them.  And may God bless you.  God bless the United States of America.

Posted by Paul Sebastian at 11:31 PM No comments: