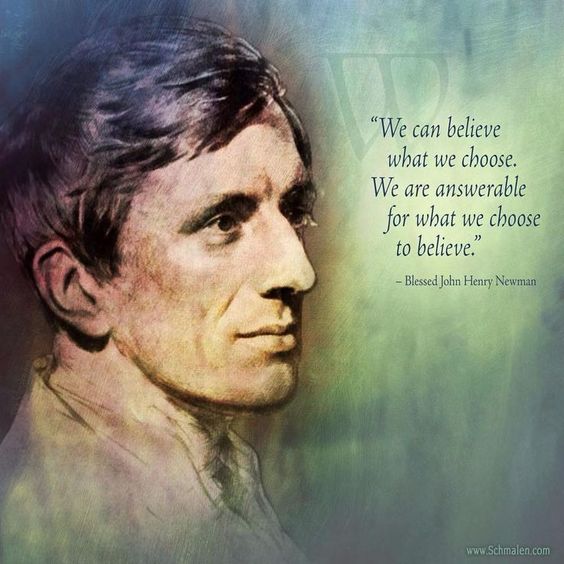 Newman’s An Essay on the Development of Christian Doctrine (1845) is a masterpiece which he started as an Anglican and finished as a Catholic.  Luther and the other Protestant reformers said that many elements in Catholicism are deviations or unwarranted additions to Biblical revelation.  Thus a pruning was necessary.
Fr. Newman claimed that these were not deviations, but developments of Biblical revelation for a better understanding.  Doctrine must develop over time to its fullest meaning and all aspects.  For this to occur ideas must be debated, discussed, analyzed, and clarified through the energy of a community of discourse by theologians.  To be perfect there must be changes in understanding.  For example, St. Peter did not understand the Trinity as well as St. Thomas Aquinas more than a thousand years later.
Because this process can be corrupted by heresy, the conclusions must be affirmed by the infallible teachings of the Church.  Since some theologians tend to go all over the place and there often is controversy, indispensable is the Pope, above the fray, to act as a referee or umpire to settle disputes…….a living, infallible, voice of authority, namely the Pope.

No wonder, the Catholic Church has been consistent in its teachings over the centuries while 35,000 Protestant denominations diverge in every which direction with 35,000 interpretations of the infallible Bible alone.  Thus Christ appointed a line of Popes inspired by the Holy Spirits to keep the boat of St. Peter on an even keel in the right direction.

In Newman’s time and today liberals advocate change and development in the life of the Church even at the level of doctrine.  Conservatives see the necessity of an infallible authority.  Newman saw both as mutually implicative.

Fr. Newman strongly believed that if the understanding of revelation develops over time and space, God must have desired that the Church be gifted with a living voice of authority.  The consensus of the Early Church Fathers is not a living voice in the here and now.  In the Vatican II Council, the Bishops of the world did reach a consensus on many refinements of Church teaching under the guidance of the Pope without contradicting previous teaching.  Only the Catholic Church can claim to have an infallible living voice of authority to settle controversial disputes and disagreements when he speaks “ex cathedra” (“from the chair”). 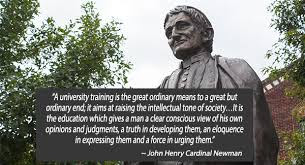 Newman’s Idea of the University (1852) is a compilation of nine lectures in a masterful prose style that he gave as Rector of the Catholic University of Dublin. It is one of his best loved and influential books, so relevant to today. Fr. Newman strongly affirmed that Theology (Study of God and the faith) has a definite place in the university curriculum as an intellectual discipline.  After all, university (from the word universal) is supposed to include all disciplines which must include Theology.

God, the author of all knowledge, must be at the center that integrates all of the disciplines into a whole.  Theology, the study of God, does that. When God is taken out, as in many secular institutions, there is a vacuum and something else replaces it. Part of reality is missing in a distorted and false world view that destabilizes the university.
When economics (Carl Marx) and/or science (Darwin) dominates, God is eliminated in our politically correct secular institutions and so many students graduate as intellectual pagans…….atheists, agnostics, or indifferent to anything spiritual.  Newman had a passion for the whole, a total vision that includes God.  Secularists see religion as a private affair and feeling; therefore religion should have no place in the university.  That view is against Christian tradition which treats the faith as objective reality…….Christ as a historical figure and God as the creator of all things.
A liberal arts education is essential…..free from obsession with utility.  After one achieves technical success or technology has served its purpose, then what?  The complete person must rest in, i.e. savor, enjoy, and cultivate the true, the good, and the beautiful……the beauty and goodness of God.  While specializing in one area perhaps, the truly educated person must have some knowledge of all the main disciplines.  One needs the liberal arts for a cultivated conversation.  The engineer and the manager must be aware of the social consequences of his/her decisions.
American education is too pragmatic.  The university must cultivate the mind for its own sake……teach the student how to think.  Newman agreed with Aristotle that abstract knowledge is a good in itself.  The Church’s job is to make saints for Heaven; the balanced university’s job is to produce gentlemen, tolerant with a philosophical frame of mind.  Catholics must step out of their intellectual ghetto to engage the university and the world with greater confidence.

Newman’s ideas were very Catholic, but filled with the Oxford spirit.  To make Notre Dame an elite university academically and be accepted in intellectual circles, the president, Fr. Theodore M. Hesburgh, C.S.C. accommodated with the secular institutions.  As a result, Notre Dame became perhaps more secular than Catholic.  It is now trying to recover much of its Catholic identity.

His Grammar of Assent (1870) is another masterpiece that deals with the relationship between faith and reason in accepting (i.e., assenting to) a truth of the Church.  Pursuing truth was close to Newman’s heart throughout his life, but he puzzled over the best process at arriving at the truth.  Necessary is a strong argument or converging probabilities.  He used his conscience as well…….a certain keen sensibility, pleasant or painful upon certain of our acts which we call right or wrong like an inner voice.  We know when we please or offend a person, namely God by our actions……a person powerful enough to see and judge what we have done.

How do we come to assent to religious propositions?  How can we say that a religious doctrine is true?  Evangelization requires both formal logic with real syllogisms (notional assent) and informal logic (real assent).  Notional assent may be a syllogism as A=B and A=C; therefore B=C.  One may acquiesce to abstract propositions, to mathematical formulas, or to philosophical ideas.  It may be a whole range of doctrines and dogmas.  It may be an intellectual belief that slavery is wrong or notions of the Bible regarding the poor.
Real assent consists of the visceral emotions or feeling that connects the person to the proposition…….the splendor and beauty of example and witness……a picture, hunch, instinct, experience, or memory that stirs up the emotions.  It may be something like the beauty of a rose window of a church.  In real assent one accepts concrete things, images, and impressions.  These stimulate personal behavior and action.  Can real assent be given to God who is essentially spiritual, immaterial, and ethereal?  Persons influence us; voices melt us; looks subdue us; deeds inflame us.

We often throw arguments against each other in the abortion vs life debate, but don’t convince and don’t hit home.  One protester in front of an abortion mill shouted: “Your baby has fingernails.  Then the woman noticed that many patients would drum their fingernails.  This stirred up an inner emotion that drove her out of the clinic.

The book, “Uncle Tom’s Cabin” gave the reader a visceral contact with slavery.  Seeing the reality of the poor today may arouse the emotion to do something.  There is no logical justification that England is an island, but there are many hunches, intuitions, testimonies, perceptions, and hints.  Taken all together, one uses his illative sense and assents.  In other words, we obtain assent by weighing converging possibilities.

Newman also wrote poetry, some of which was put to music as “Lead Kindly Light”.  See http://www.ccwatershed.org/newman/ for a beautiful music video.

Why is John Henry Newman a pivotal player in Catholicism?  Sentimentalism, subjectivism, and liberalism were threatening classical Christianity from within as it is today.  When the Church was attacked by modernity, he confronted them with confidence and intelligence.  His thought fostered a dialogue between the ancient faith and modernity.

At the same time Newman defended the objective integrity of doctrine.  Furthermore, his life was a great witness to the truth.  His intellectual base was the early Church Fathers, but he understood the philosophers Locke and Hume.  Fr. Newman showed that intellectuals could believe in the Biblical view of the world.
Appendix

See the 52 minute DVD by Bishop Robert Barron on “St. John Henry Newman | CATHOLICISM: The Pivotal Players” with great photography on You Tube at
https://www.youtube.com/watch?v=xSJviI29C2w
.
The Volume 1 six DVD set as well as Volume 2 and Volume 3 can be ordered from

Posted by Paul Sebastian at 11:27 PM No comments: