(233) St. Francis of Assisi: a 13th Century Reformer For a Church in Crisis

AMDG
Much is Taken from the DVD by Bishop Robert Barron,
“Catholicism: The Pivotal Players” 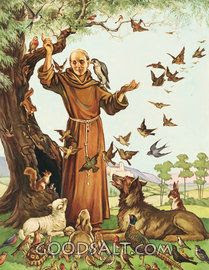 Francis of Assisi (1182-1226) was handsome, wealthy, carefree, superficial, and self-absorbed; he loved the partying and the good life.  He was a good businessman in helping his father run a cloth store.  The young man wanted to be famous and the most direct road was through military exploits.  In the war with Perugia, another city-state, Francis fought bravely, but was taken prisoner for several months.

After being released, it was back to business and pleasure, but this time Francis felt an emptiness in that lifestyle and became interested in the spiritual, in the invisible presence of God.  Gradually he felt detached from the world and attached to God.  One day Francis encountered a poor leper, whom he embraced and gave some coins.  This gave him a feeling of great joy and he gave all his possessions to the poor.


“Rebuild my Church”.  While praying in San Damiano, a small church in disrepair, the cross over the altar came to life and seemed to say: “Francis, repair my house which is falling into ruins”.  However, God usually communicates with us by inspiration.  The Church owned land; the Pope was a temporal ruler; bishops sold offices; and uneducated priests were morally corrupt while the people were indifferent to the faith.  Francis took the command literally and used the profits of his father’s cloth business to repair San Damiano Church.

Pietro Bernardone demanded retribution at a public trial and his son returned all he had, including the clothes on his back saying: “I stand naked before the Lord” with complete dependence upon the Providence of God for his livelihood.  Thus he renounced wealth, power, and pleasure in exchange for poverty, purity, simplicity, joy, and a complete trust in God.  He was now dressed in the tunic of a hermit with a rope for a belt.
Francis begged for money to repair San Damiano, singing as a troubadour in French at each donation and was filled with the Holy Spirit.  In repairing Porziuncola, another small church in the woods, he realized that God wanted him not to rebuild buildings, but to rebuild the life of the Church.  Thus often barefoot he began to preach repentance and penance.

Soon followers joined Francis even though they were mocked, ridiculed, and persecuted as unnerving and crazy heretics.  Just as the mustard seed, the Franciscans started small with one man and now the Franciscans number in the thousands all over the world.
In 1209 Francis traveled to Rome to obtain the permission of Pope Innocent III to start a religious order, which was not his original intention.  The Holy Father was fighting corruption and was trying to hold the Church together.  Recent popes 800 years later in the 21st Century have similar problems.  Pope Innocent dreamt that the Church was collapsing and a poor beggar was holding it up.  The Pope saw the resemblance and gave the band of newly approved Franciscans the task of preaching and promoting penance to Christian countries, a new evangelization for its time, which is also needed today in every country of the world.  The new Franciscans lived in huts in Rivotorto.
St. Clare gave up her wealth in becoming a follower and a female counterpart of Francis in founding her order.  She is considered the mother of the Franciscan nuns.  Often a saint would have a spiritual bond with a woman in sharing thoughts.  In 1958 Pius XII designated her as the patron saint of television.  Her feast day is August 11.
Mission. Although persecuted as heretics, mocked, stripped, beaten, and dragged through fields, Francis and his men awakened a spiritual hunger in the people.  They saw rejection as an opportunity to exercise patience.  He trained his men to practice poverty, simplicity, obedience, and purity while doing charitable works as caring for lepers. 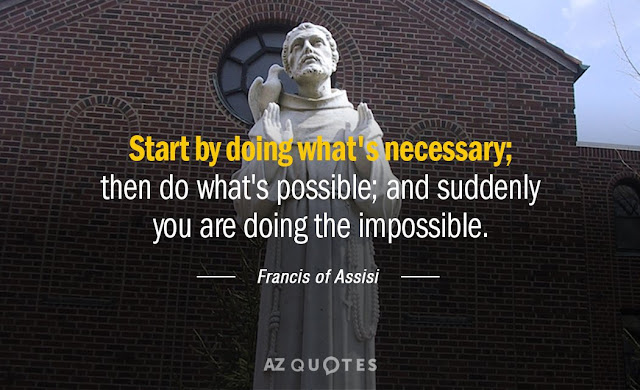 Then he sent the Friars Minor or little brothers out on mission as far as Spain to preach, beg, and offer peace without defending themselves when attacked.  In Morocco five of his men were beheaded.  Francis himself went to the Holy Land, which was engulfed in the Crusades.  He evangelized the Christian soldiers, some of whom joined him, and fearlessly met with the Sultan…..making his statements clear and simple.  The Sultan was impressed by the courage of Francis, a pioneer in ecumenical dialogue.
The Stigmata. In 1224 Francis retreated to a cave for prayer.  Although he encountered spiritual warfare, Francis had an intense communication with God, even levitating.  The friar asked to feel our Lord’s passion and the intense love He had for us on the cross.  As other saints who gave themselves to God, Francis wanted to participate in the passion of Christ through which He saved the world.  His prayer was answered with the stigmata.

We can do the same during recovery from accident or illness when we unite our cross with the Lord’s cross and offer the suffering up to God as a dynamic prayer for whatever intention.  In suffering one loses control and must trust in the Lord……complete abandonment to the divine will.  Turning your life to God puts your life out of your control.  Then “it is no longer I who live, but Christ who lives in me” (Galatians 2:20).
When death approached in 1226, Francis, almost blind, welcomed death with joy.  He died near the Porziuncola, singing the Canticle of the Sun.  He repeated Psalm 142: “Bring my soul out of this prison that I may praise thy name.” 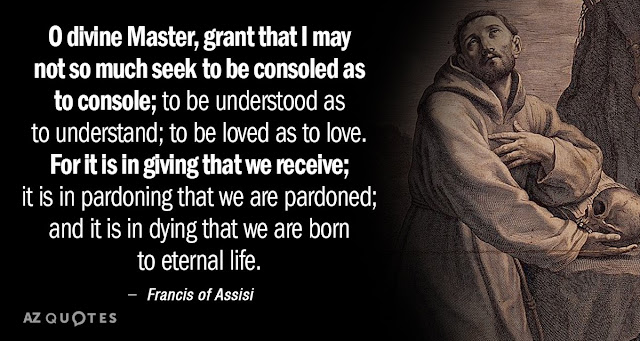 Teaching of St. Francis. Being detached from the goods of the world, the little poor man pledged loyalty to “Lady Poverty” because it freed him from the rat race for power, wealth, pleasure, privilege, position, and prestige for a life of mission.  Begging for the bare necessities of life forced Francis’ men to completely trust in God, something in common with all of the saints.
Radically following Christ closely and His Gospel literally, especially the beatitudes, St. Francis sums up what is best in Christianity…….he was simple, humble, close to nature, and deeply in love with God in speaking across the ages to our cynical time.  He was a fierce ascetic who disciplined his body with radical self-denial and looked for the lowest place.

He wakes us up to the reality of God and brings us back to the basics of life.  St. Francis is a wake-up call for our hyper-secularized world to the reality of God, who is real and we find our joy in Him.  Christianity, i.e., the Gospel can be lived in this radical way and still has power today.  It can be realized and releases power……“turn the other cheek”; completely trust in God that He will take care of us; “love your enemy”; bless those who curse you”.

St. Francis advocated giving to the Lord what you have and He’ll multiply it.  The friars rejected honor and privilege.  A mark of the community was joy, a necessity for the soul.  They saw perfect joy as suffering with joy for the Lord.  Obedience was essential because one had to let go of his own will.  Francis had a tie to God, his creatures, and nature……..”Brother Sun; Sister Moon”, incidentally a great movie of the 1970s.  He is the patron saint of animals and the environment and his feast day is October 4.  Christianity has never been really tried by the world.  May we follow the Gospel without compromise.
Franciscan nuns once served in our parish (St. Louis Church Gallipolis, Ohio) and we once had a Third Order lay group.

Posted by Paul Sebastian at 9:15 PM