(264) The War Rages On in Ukraine as Refugees Keep Coming & the Knights of Columbus Keep Helping.

The toll 32 days after the invasion of Ukraine by Russia on February 24: 1151 UN verified civilian dead including at least 103 children. Many are uncounted for as in mass graves. There are 1824 verified injured including 133 children. Out of the population of 44 million living in an area the size of Texas, some 10,000,000 people have fled from their homes. Of this number over 5 million people have fled to their neighbors…..including Romania (555,000), Moldova (371,000 the largest per capita), Germany (369,000), Hungary (324,000), Russia (271,000 some had no choice), Slovakia (257,000), and Belarus (4,900). The United States has promised to take in 100,000. Poland alone has received 3 million refugees and more are coming. The European Union, of which they are members, is allowing refugees to live and work for three years. Most of the Ukrainian cities particularly Kyiv and Mariupol have been destroyed by indiscriminate shelling, missiles, and bombs…….targeting infrastructure, residences, even schools, hospitals, and fleeing refugees. Such targeting of civilians is considered to be a war crime. The damage to human life and property is horrendous. All of this is a humanitarian disaster. The Russian strategy is to destroy cities and bomb the people into submission, but the people have been very resilient and determined to resist the onslaught. See https://www.kofc.org/en/what-we-do/charity/ukraine.html, https://informingamerica.com/knights-of-columbus-on-site-aiding-ukrainian-war-victims/, and https://www.youtube.com/playlist?list=PL8dhS0o-trLijWN1wMTHHzCXhth-_jikFm.

Putin and military experts expected the capital Kyiv to fall within a few days, but to their amazement the well trained Ukrainian army has outperformed the Russian army which has done poorly in regard to skill, morale, unsecured communications, command & control, tactics, logistics, etc. Many soldiers feel lied to and often Putin's advisers are reluctant to tell him how poorly his military has done. In one instance, it is reported that 60 paratroopers refused to fight.

Having been trained by the U.S. Army including Special Forces and having modern American equipment, such as the hand held anti-tank Javelin, the anti-aircraft Stinger, and drones, the Ukrainian army has been very effective against the much greater number of Russian troops, tanks, and aircraft to the amazement of military experts around the world. Were it not for Russia’s huge supply of artillery, missiles, bombs, bombs, and aircraft, the Ukrainians would probably be winning. The Russians have not been able to take and control of any major city except for Mariupol in May, although about 2000 Ukrainian soldiers are still holding out in a large steel mill there despite dwindling food, water, and ammunition. Some 21,000 civilians have been killed during the siege. See https://www.youtube.com/watch?v=bhrduL7efLw.

This all shows that a motivated well trained army defending its homeland can hold its own against a foe which has many more troops, tanks, aircraft, weapons, much more ammunition and equipment. So far the Russian invasion has stalled and the war is a stalemate.

The free world has a stake in this war because a threat to freedom anywhere is a threat to freedom everywhere. The world cannot tolerate blatant aggression by a larger country upon a smaller country. World peace is at stake because unhindered aggression and oppression eventually lead to bigger wars. In the future may sanctions by united peaceful nations (currently 50) be sufficient deterrents to war and atrocities due to the memory of their consequences, thus being precedent for a world at peace. If Ukraine loses, that may embolden China to do the same with Taiwan. May all this horrendous suffering be not in vain.

Prayer has won wars. And we might mention that people are praying not only in the Ukraine, but in churches and homes all over the world…… holy hours, rosaries, and a worldwide novena plus the consecration of Russia and Ukraine to the Immaculate Heart of Mary led by Pope Francis in Rome on March 25, the feast of the Annunciation. It was a really a renewal of the consecration that St. Pope John Paul II made in union with all of the bishops of the world on March 25, 1984. In 1989 the satellite countries received their freedom from Communism and in 1991 the Soviet Union disintegrated, leaving only Russia as Ukraine declared its independence.

On October 23, 2016 the Ukrainian Greek-Catholic Patriarch Sviatoslav Shevchuk, at a ceremony held at Fatima consecrated the Ukraine to the Immaculate Heart of Mary. See 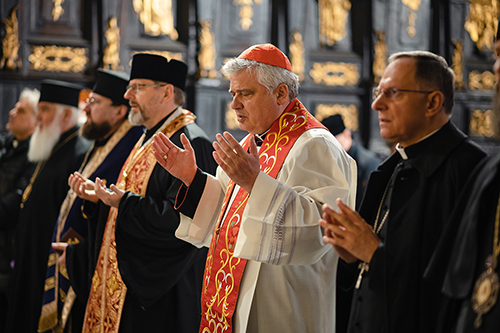 The Polish Cardinal Konrad Krajewski, papal almoner and official representative of Pope Francis, leads an ecumenical prayer service at the Archcathedral Basilica of the Assumption of the Blessed Virgin Mary in Lviv on March 10. On the left is Major Archbishop Sviatoslav Shevchuk, head of the Ukrainian Greek Catholic Church and on the right is the Latin Rite Archbishop of Lviv, Mieczysław Mokrzycki. The latter two archbishops were among the very first Ukrainian knights (now 1889 knights in 42 councils). Other Ukrainian knights were also present.

At the beginning of April, the Russian Army is withdrawing from Kyiv after a six week siege under intense shelling and bombardment, reminiscent of the Middle Ages, and is now focusing on the eastern part of the country. This may be an admission that Russia has been unable to take the capital, its main objective since the invasion began on February 24. It seems that the intercession of St. Michael, the patron of Kyiv, prevailed. His large statue overlooks the large city. President Zelensky remains in power in the capital despite 12 assassination attempts. However, outside of Kyiv 900 bodies were found executed by the withdrawing troops. Russia is repositioning its troops, reorganizing, replenishing losses with fresh troops including mercenaries from Libya and Syria, and resupplying.

Urging all knights worldwide to participate in the novena/and consecration initiated by Ukrainian Catholics, the Supreme Knight Patrick Kelly said: “Together, we’ll ask Our Lady to intercede on behalf of those directly impacted by the conflict, to give strength to our Ukrainian and Polish Knights working so hard to deliver relief, and to help bring peace and healing to the region.”

The knights also participated in a Holy Hour in New Haven on February 26 and again on Ash Wednesday March 2. Kelly underscored the Knights’ two-part response to the humanitarian crisis — charitable support facilitated by the Ukraine Solidarity Fund and prayer. “While the benefits of our prayers may not be as tangible as dollars spent on food or medicine,” the supreme knight wrote, “we trust that their effects are even more important…… We know from history that prayer has defeated evil many times and has won wars.”

Despite being very much out-manned and outgunned, the Ukrainian Army has done very well, holding its own under heavy odds against what had been considered one of the most powerful armies in the world. Thus I cannot help but think that the avalanche of prayer is achieving results, giving confidence to the people and its soldiers that Ukraine can win. It seems that God is helping Ukraine as He helped the Jews of the Old Testament. We have the faith that Ukraine will maintain its independence, if not in the short run, certainly in the long run. Then may Ukraine clean up its corruption and become an example to the world of a well functioning democracy. May God use this debacle to set Russia on the right course. Already there are signs of an incipient religious revival in Russia. PRAYERS ARE POWERFUL! See my article on World History and the Power of the Rosary & Mary’s Intercession http://paulrsebastianphd.blogspot.com/2013/10/the-power-of-rosary-and-marys.html.

The crisis in the Ukraine has hit home on the other side of the Atlantic. There are over one million Americans of Ukrainian descent. They have their own Ukrainian Byzantine Catholic Church. It has its own Archdiocese of Philadelphia. At South Gallia High School near our home there is a beautiful Ukrainian exchange student by the name of Khrysta Svystovych. In no time she became a cheer leader. She’s safe here, but is very worried about her extended family back home. She usually attends Mass at our St. Louis Church.

In addition our family has a number of relatives who live in the Ukraine on my side (we visited them in 2017). On Jaga’s side, our niece Dagmara and her husband have taken in a mother and her 15 year old son into their home. Father had to stay behind and fight. Their stay is working out well. To reach the border they had to travel in an unheated train for something like a couple of days with no lights for fear that the train would be shot at or shelled. 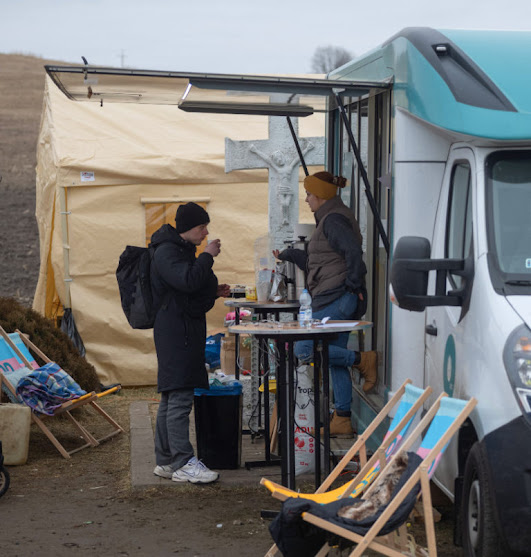 A refugee receives a warm drink after his journey at a kiosk in the Knights of Columbus Mercy Hut at the border town of Hrebenne.

At Hrebenne, a Polish border town, the Polish Knights of Columbus have taken a major role under the leadership of Marcin Wojciechowski of Council 15267, working 15 hour days. When asked, why he volunteers, his answer was: “I just want to help people”. That should inspire us! Others answered that their grandparents were refugees or had to live for years under tyrannical Russian rule. They know only too well that if Ukraine loses, Poland could be next. The knights and their sons work outside and their wives and daughters work inside.

The knights have set up aid tents which they call “Mercy Huts”. First is the opportunity for the cold refugees to get warm and have some hot food, soup, and drink. After all, Ukraine and Poland are at about the same latitude as Canada. The exhausted refugees, many under trauma in traveling through dangerous areas, are provided a place to rest before being placed with families all over Poland. Councils throughout Poland are raising funds and/or helping. 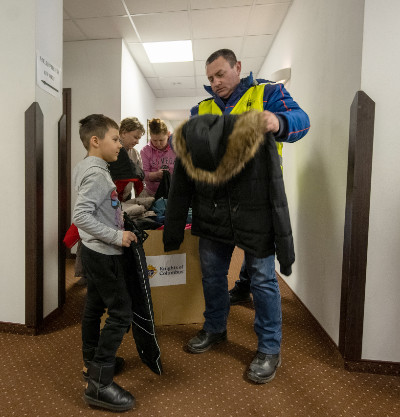 Many refugees, who just came with barely the clothes on their backs, receive supplies, toiletries, nonperishable goods, etc. The Mercy Hut also serves as a field hospital, providing medical care, medicines, and IVs in the Medical Tent.

You can help too. The Knights of Columbus announced Feb. 25 a commitment of $1 million for immediate distribution to support Ukrainian refugees, including Ukrainian Knights and their families impacted by the recent Russian invasion of their country. The organization has also launched the Ukraine Solidarity Fund, an international fundraising campaign that will match all funds raised up to an additional $500,000. Thus each dollar donated will be matched by another dollar. To donate, go to www.kofc.org and click on “Donate” in the upper right corner of the home page.

Freedom must always be preserved and guarded often at great cost. Freedom is not free. Be ready and PRAY, PRAY, PRAY. Don’t take freedom for granted; don’t abuse it. We can lose it.

Posted by Paul Sebastian at 8:01 PM No comments: