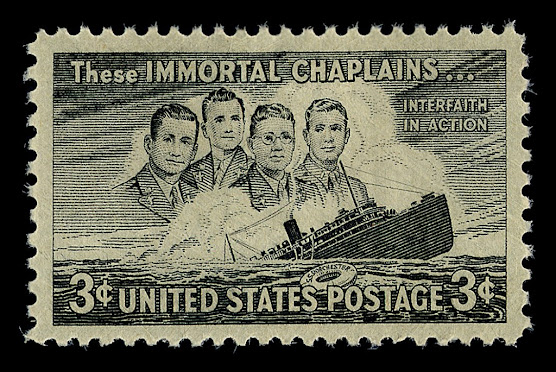 A 1948 commemorative postage stamp honoring the four selfless Army chaplains of four different faiths who gave their life jackets and their all so that their men may live as their troop ship, the USAT Dorchester was sinking in the North Atlantic on February 3, 1943 after being torpedoed by a German submarine.   At the time it cost only 3 cents to mail a first class letter.  Every postage stamp tells a story which we are sharing with you.  For a video click on https://www.dvidshub.net/video/582811/75th-remembrance-four-chaplains-sinking-usat-dorchester.

The United States was deep into World War II in the winter of 1943.  Axis forces occupied most of Europe except Spain and Portugal and a part of Russia.  The German 6th Army surrendered to the Soviets at the Battle of Stalingrad in Russia.  German Field Marshal Rommel was retreating into Tunisia.  The Allies had just driven the Japanese out of Guadalcanal in the Solomon Islands.  Robert Schopis, our parishioner fought in the Battle of Guadalcanal.  The tide of the war was starting to turn. 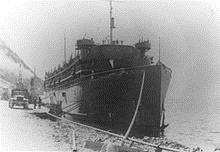 On January 23, 1943 the 5,649 ton 368 feet long USAT Dorchester left New York harbor bound for an army air base in Greenland with 750 troops, 23 Navy armed guards and a civilian crew of 130.  The USAT Dorchester, originally built as an ocean luxury liner for 314 passengers and crew in 1926, was converted into a troop ship after the Japanese attack on Pearl Harbor, Hawaii December 7, 1941.  Among the 904 men were four army chaplains.  They all met at the Army Chaplains School at Harvard University and became friends 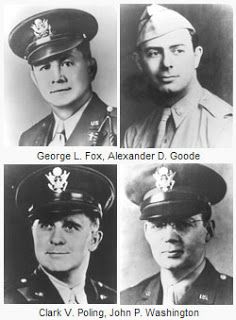 They practiced what they preached; they lived the Gospel………“This is my commandment: love one another as I love you.  No one has greater love than this, to lay down one’s life for one’s friends” (John 15:12-13).

Lt. Reform Rabbi Alexander D. Goode PhD (Jewish) was born in Brooklyn, NY in 1911, followed in his father’s footsteps and became a rabbi in 1937 at Hebrew Union College.  He studied at the University of Cincinnati.  He received a doctorate from John Hopkins University in 1940.  Like Chaplain Washington, he originally wanted to serve as a Navy chaplain but was rejected.

Lt. Fr. John P. Washington (Catholic), born in 1908 in Newark NJ, attended Seton Hill University, and was ordained a Roman Catholic priest out of Immaculate Conception Seminary on 15 June 1935.   He served as a parish priest in three churches.  After Pearl Harbor, Fr. Washington volunteered for the Army in May 1942 after being rejected by the Navy because of his eyes.  After three stateside assignments, he was sent to Chaplains School.

Lt. George L. Fox (Methodist) , born in 1900 in Lewistown, PA, the oldest of the Four Chaplains, served in World War I as a medic. After the war, he studied at the Moody Bible Institute and Boston University of Theology.  He was married in 1923, ordained a Methodist minister in 1934, did parish work, and was appointed as an Army chaplain in July 1942.

Lt. Clark V. Poling (American Reformed) was born in 1910 in Columbus, Ohio into a family that had produced six generations of ministers. He studied at Hope College, Rutgers, and the Yale Divinity School.  He was ordained in 1936 as a minister in the American Reformed Church.  After doing parish work, he was appointed as a chaplain in June 1942.

According to the First Sergeant on the ship, "They were always together, they carried their faith together."  They demonstrated throughout the voyage and in their last moments, interfaith compassion in their relationship with the men and with each other. 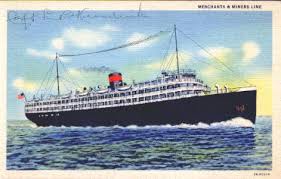 The USAT Dorchester on the open seas.

The ship made a stop in Newfoundland and the troops used the time for a 9 mile march in full military gear to keep in shape.  The waters of the final leg to Greenland were so infested with German submarines that the sailors dubbed it “Torpedo Junction”.  Furthermore, it appears that German intelligence got word of this troop movement in a security breach.  Three coast guard cutters accompanied the USAT Dorchester for protection.

That night Fr. Washington said Mass for the men of many faiths.  A German U-Boat was detected by sonar and dropped depth charges.  Hans Danielsen, a Merchant Marine captain, put the men on high alert and ordered them to sleep in their clothing, boots, gloves, and life jackets.  According to testimony, "Many soldiers sleeping deep in the ship's hold disregarded the order because of the engine's heat. Others ignored it because the life jackets were uncomfortable."  Human nature hasn’t changed; today we are reluctant to wear masks in order to minimize a worldwide pandemic.

Disaster. Close to safe waters within range of army planes about 150 miles from Greenland at 12:55 am on the dark early morning of February 3, the German submarine U-223 escaped detection and shot three torpedoes.  One hit the engine room with a tremendous explosion.  Immediately, the electric lights went out; panic and chaos ensued especially among those trapped below deck and others groping in the dark.  Ammonia and oil spread fast across the decks of the sinking ship.  Men were screaming, others crying or franticly trying to get lifeboats off the ship, which was going down fast.  It took only 18 minutes.  Only two of the 14 lifeboats were successfully used.

Caught by surprise, many did not have their vests on.  Many made it up to the deck in their underwear as the frigid wind blew down from the Arctic.  Others were trapped deep in the hold of the ship.  The four chaplains tried to calm the men and organize an orderly evacuation, tending the injured, guiding the wounded and the disoriented to safety and handing out the few extra life vests.  Finally all four selfless chaplains removed their own vests and gave them to the men.  Fr. Washington gave many absolution.

One survivor later recalled: "It was the finest thing I have seen or hope to see this side of heaven." The rabbi also gave away his gloves. The chaplains directed the men onto the few life boats available.  Others simply jumped into the freezing waters, where they could survive for only about 20 minutes.  Many were trapped deep in the hold of the ship.  Some were too afraid to jump and went down with the sinking ship. 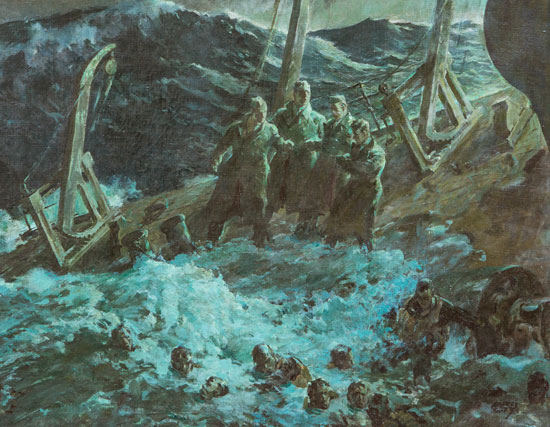 The 230 survivors related that the four chaplains linked arms and prayed on the aft (rear) deck…….ecumenism at its best.  They were remarkably at peace and were singing hymns to the Lord as the ship went down.  Survivors could hear the rabbi praying and singing traditional Jewish hymns in Hebrew.  The priest did the same in Latin.  Hypothermia killed most of the men within 20 minutes in the 34 °F (1 °C) water.  The air temperature wasn’t much warmer at 36 °F (2 °C).   By the time the Coast Guard cutter, the USCGC Escanaba arrived to rescue, hundreds of dead bodies were floating in the icy waters buoyed up by their life jackets.

Grady Clark, a survivor, related: “As I swam away from the ship, I looked back. The flares had lighted everything. The bow came up high and she slid under. The last thing I saw, the Four Chaplains were up there praying for the safety of the men. They had done everything they could. I did not see them again. They themselves did not have a chance without their life jackets.”  This was one of the worst maritime disasters of World War II……..674 dead and only 230 survivors. 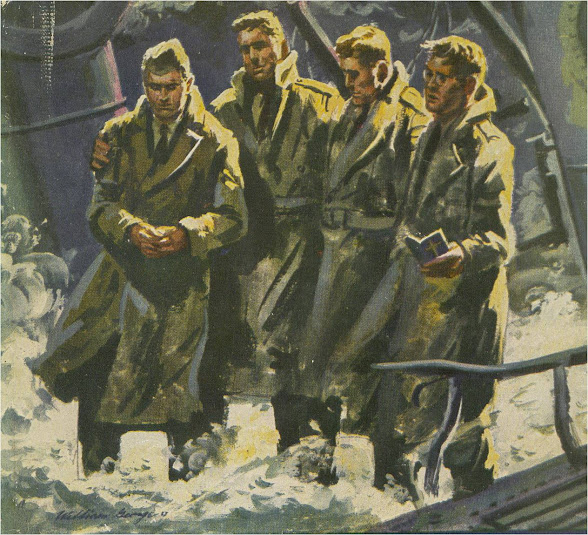 Although the Distinguished Service Cross and Purple Heart were later awarded posthumously, Congress wished to confer the Medal of Honor but was blocked by the stringent requirements which required heroism performed under fire. So a posthumous special medal for heroism, the Four Chaplains' Medal, was authorized by Congress and awarded by President Dwight Eisenhower on January 18, 1961.  Their example of love, dedication, and courage will inspire until the end of time. 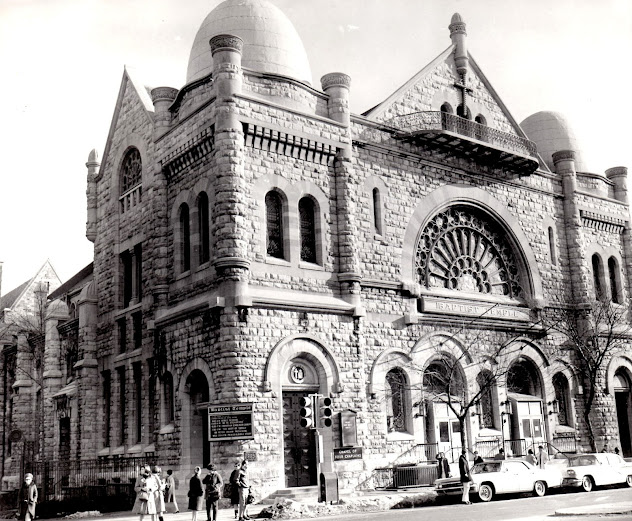 The survivors’ testimony and the chaplains’ bravery are enshrined at the Chapel of Four Chaplains in the Philadelphia Navy Yard, where the Chapel Memorial Foundation honors acts of selfless service nationwide in memory of the Four Chaplains and crew of the USAT Dorchester.

Later in the war a British Destroyer sank the U-223 with only a few survivors, including Gerhard Buske, the first officer.  In the year 2000, the Immortal Chaplains Foundation brought Buske to Washington, DC.  There they attended memorial ceremonies, toured the Holocaust Museum, and visited with Theresa Goode Kaplan, widow of Chaplain Goode, who reluctantly accepted the visitors’ expressions of respect for her husband and regret for her suffering.  Four years later, Buske spoke at the foundation’s sixtieth-anniversary ceremony, saying, “we ought to love when others hate…we can bring faith where doubt threatens; we can awaken hope where despair exists; we can light up a light where darkness reigns; we can bring joy where sorrow dominates.”

Time and time again military chaplains demonstrate their tremendous value in comforting, supporting, calming, rescuing, and counseling under the trauma of battle.  Yet secularists are advocating that chaplains should be eliminated in order to cut costs.  For more detail, go to


Posted by Paul Sebastian at 5:51 PM No comments: