High Schools students can spend their summers in many productive ways…….a diversity of summer jobs, volunteer service work, and camps.  There are many sports camps for basketball, volleyball, baseball, softball, and football.  There’s also scout camp and band camp, but have you ever heard of a Great Books Camp?  Thomas Aquinas College at Santa Paula, California just outside of northwest Los Angeles has just that.
High school seniors may obtain a great preview of TAC and a stimulating taste of the true, the good, and the beautiful by attending its two week High School Great Books Program during the summer following their junior year.  The adolescents will be exposed to a few of the greatest minds of Western Civilization and will receive a great broadening experience especially those who will be attending a a secular university or a more technical college that specializes in the professions such as business, engineering, computer science, education, or one of the health specialties.  Hopefully, the students will obtain an appreciation for the give and take of rational argument and a thirst for pursuing the truth which civilizes, ennobles, and liberates.  To begin with they receive in the mail the readings: Sophocles’ Oedipus Rex, Plato’s Euthyphro and Apology, and the work of St. Athanasius, On the Incarnation.  The youths are expected to read them before their arrival for Socratic discussion during the program under the light of the Faith.

After discussion of the works of early Greek thinkers in their pagan groping to make sense out of nature and their existence, the account of the creation and fall of man in Genesis of the Bible begins the discussion about the Divine Plan, human nature, and free will as well as the causes and consequences of the great sin.  St. Athanasius’s On the Incarnation presents the answer that the Faith provides to the tragedy of the fall of man.  Kierkegaard’s Fear and Trembling, Pascal’s famous essay on the “wager”, and St. Thomas Aquinas’s fifth proof for the existence of God in Summa Theologica all stimulate considerations of the right relation between faith and reason.  In Fabre’s The Grey Cricket the youths will see purpose and order in nature.  They will reflect upon the meaning of life in Tolstoy’s The Death of Ivan Ilyich.  At the same time Euclid’s Elements demonstrates the intelligibility, order, and accessibility of mathematical ideas as tools for understanding God’s creation.  Flannery O’Connor’s The Enduring Chill ties much of it together in revisiting the earlier questions about death and life, arrogance and docility, and saving grace. 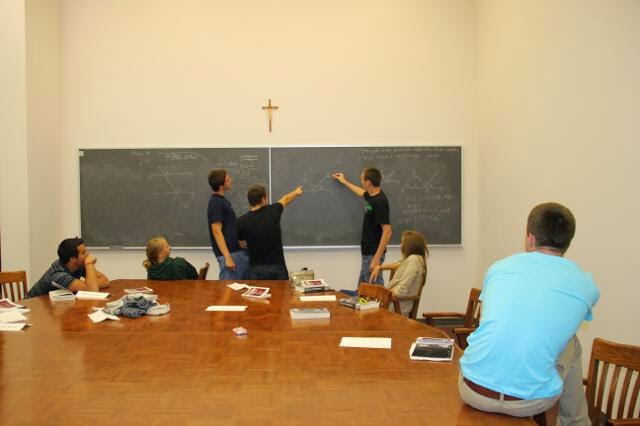 The students receive a glimpse of the struggles, stops, and turns in the quest for the true, the good, and the beautiful over the centuries and can imagine themselves in a time machine reliving part of it as they read and discuss the works of the great authors of yesteryear.


The Summer Program is not only the Great Books.  It’s also prayer – Mass, Eucharistic Adoration, opportunities for Confession, Rosary Procession, Evening Consecration, discussion in the dorms, even prayer before games.  There are also fun activities as sports, music and song around a bonfire, a hike in the nearby mountains of Los Padres National Forest, a trip to the beach on the Pacific Ocean and dinner in Santa Barbara, a visit to the Getty Center Museum in Los Angeles, an evening classical concert at the Hollywood Bowl, acting in a Shakespearean play, learning dance steps, and a closing dinner dance

A total of 136 students from all over the United States and even the world attended……30 states, 7 countries, and 4 continents, traveling from as far as Argentina, Italy, and Singapore.  There were Catholics and some non-Catholics, different races, ethnic backgrounds, a picture of diversity.  If history repeats itself, most of the 136 will enroll in the Fall of 2015.  Of course, the religious activities are voluntary.

Thanks to my daughter Stephanie a 2014 TAC graduate, my other daughter Naomi (second from the left in the above photo) attended the Summer Program in 2012 and made close friends which she still has today although a student at Franciscan University of Steubenville.  Our son Joseph (on the far right in the photo below) attended the 2014 program.  Both enjoyed it.  They did not come back transformed, but they now have an unforgettable experience to fall back upon in their development.  They have been exposed to a number of great books, the Socratic Method of discussion, inquiry, socializing and mixing with people in an intellectual environment, art, music, and most of all the spiritual aspect of life.  This experience reinforced and enriched much of what we tried to teach them at home and added a lot to what we as parents were able to give them.


In sum the TAC Summer High School Great Books Program is a marvelous two week spiritual, intellectual, and social, experience of prayer, seeking the truth, learning, and lots and lots of good clean fun.  The kids do not fit the nerdy stereotype at all, but as a whole are beautiful, wholesome, fun loving youths who also enjoy learning.  See the TAC website at www.thomasaquinas.edu and my blog #139 for a detailed description of Thomas Aquinas College. See http://thomasaquinas.edu/admission/summer-program-blog/?cat=51 for the 2014 Summer Program Blog which has considerable detail with hundreds of photos (slides) and http://thomasaquinas.edu/admission/high-school-summer-program for a general description of the High School Great Books Program.

Posted by Paul Sebastian at 9:16 PM No comments: