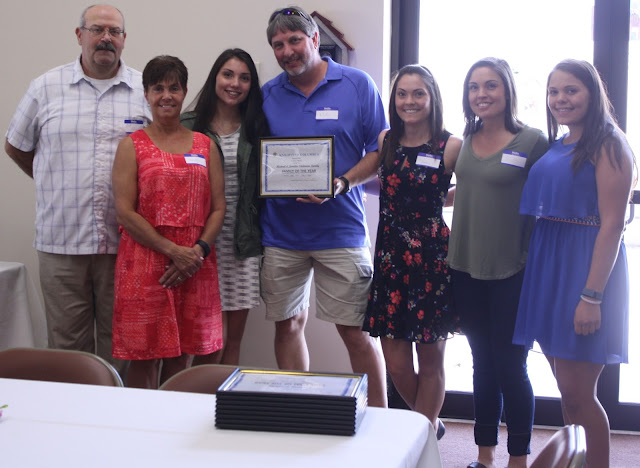 FAMILY OF THE YEAR . Former Grand Knight Matt Bokovitz on the extreme left presents the St. Louis Council's most important and prestigious award, " Family of the Year " to Mike and Jennifer Edelmann With Their four lovely daughters from left to right Mikayla, Andrea, Stephanie, and Kimberly. A few years ago the family had a big surprise; Mikayla and Kimberly are twins. Fredrick Michael, a former Altar server, was away serving our country With the National Guard. All five children are athletes; Stephanie Teaches gymnastics. Mike is an engineer at the Piketon plant and Jennifer is President of the Gallia Academy Boosters, Having done so much for the athletic program there. The Edelmann extended family has - been active in the parish faithfully through three generations. Last Spring Their help with the Fish Fry was very valuable. Most of them serve in the choir With other members of the clan Edelman Which adds so much to the Mass. Grandma Edelmann is the Choir Director and has produced a great musical family. All of the Children Have Gone through CCD, Including Confirmation and Were active in the YACHT Club. The Knights of Columbus was founded by Fr. Michael J. McGivney to Promote, preserve, and protect families. 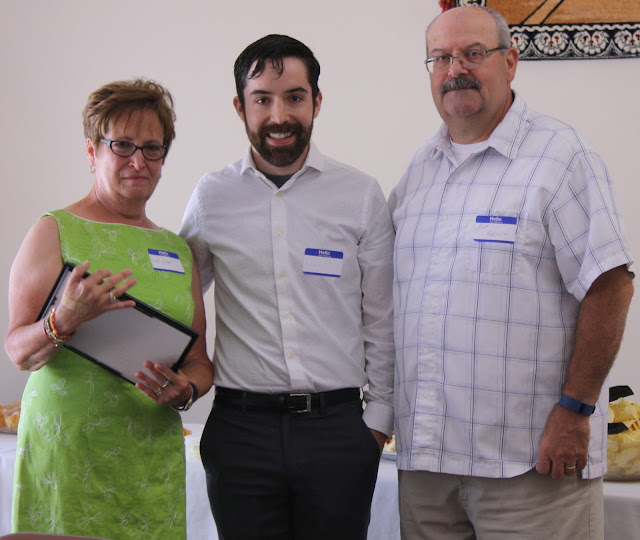 VOLUNTEER OF THE YEAR.  On the left Deb Payne With her ​​are, Bryan receives the "Volunteer of the Year" award for her recently deceased husband, John Payne WHO worked With dedication on Counsel 3335 projects and for His brother knights Until a couple of weeks Overcome by cancer before. I have worked in every aspect of the kitchen. His meals Were always delicious. We will miss His kindness Especially and friendship. 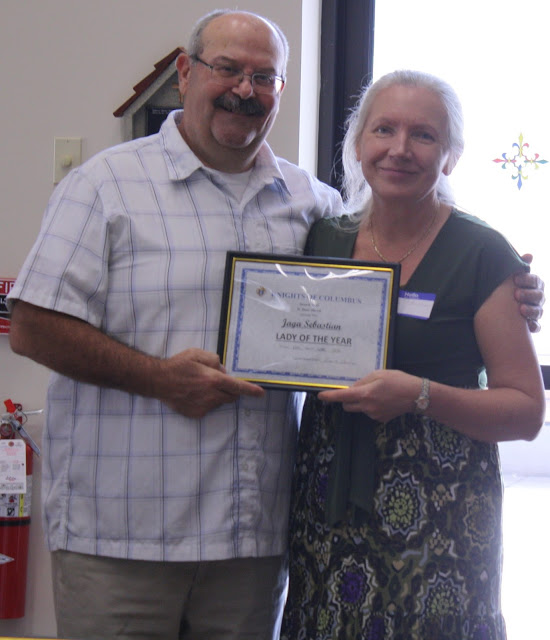 LADY OF THE YEAR .  Former Grand Knight Matt Bokovitz presents the " Lady of the Year " award to Jaga Sebastian, mother of four, two of Whom are still in college. A woman of prayer, she faithfully assists at daily Mass, is a Eucharistic Minister, is a member of the Parish Council and the Catholic Women's Club, Teaches the First Communion Class since 2014, and Works with the ecumenical Loaves and Fishes Soup Kitchen. Jaga mobilizes members of the parish to donate food for the 300 meals for each last Sunday of the month. On the first weekend of the month Jaga mobilizes the women to say a decade (and mystery) of the rosary each day; They pray together all 20 Decades daily. Every weekend she Takes up to five ladies to Mass. Every month she Organizes a breakfast for Those Who Attend Mass During the week. Also Jaga has worked as a nurse for the French 500 Free Clinic and is an adviser Together with her ​​husband for the Catholic Newman Club of the University of Rio Grande. 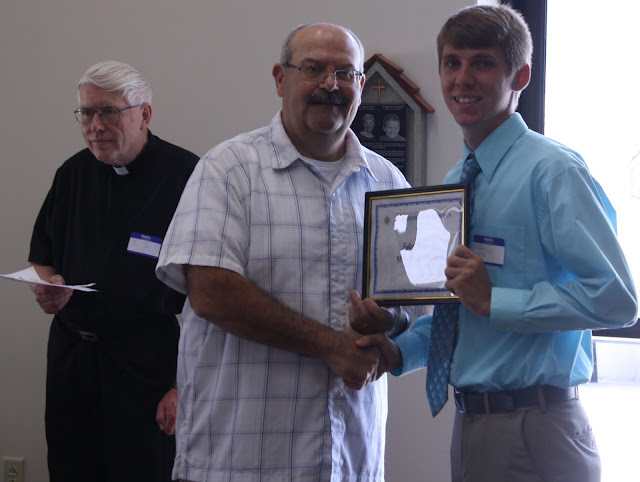 KNIGHT OF THE YEAR. Former Grand Knight Matt Bokovitz presents the “Knight of the Year” award to Tyler Reynolds.  After converting to the Church in 2015, he quickly joined the knights and has made an impact…….so much so that he received the “Shining Armor” award for first year knights……first ever in our Council.   Already he has been elected as Deputy Grand Knight for the coming year.  Our pastor, Fr. Thomas Hamm in the background
welcomed the newcomers to the parish who also were honored. 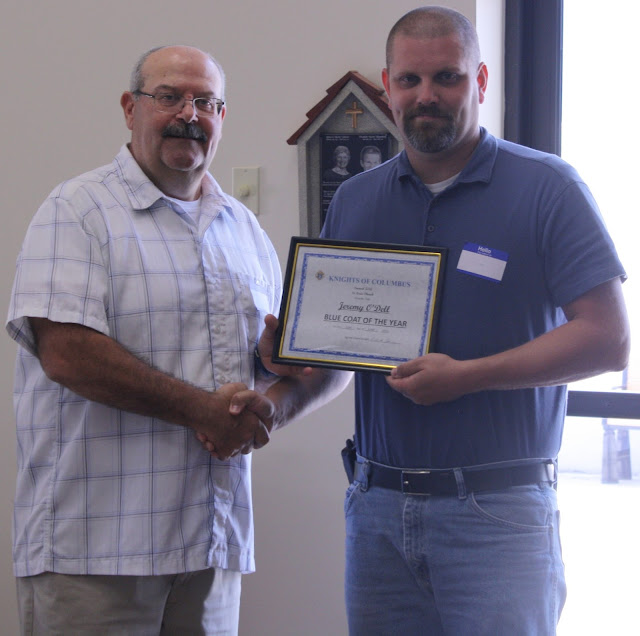 BLUE COAT OF THE YEAR. Jeremy O’Dell receives the “Blue Coat of the Year” award in appreciation for his service to the community as a fire fighter at personal risk of life and limb. 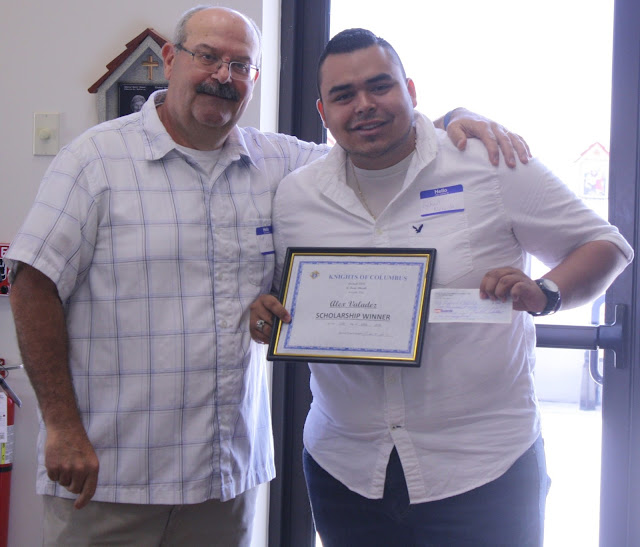 Former Grand Knight Matt Bokovitz presents a $1000 Scholarship to Gabriel Alex Valadez, son of Gabriel and María Luz Valadez, who will be attending Culinary School.  This will well equip him to help his father in the El Toril Mexican Restaurant a few shops down from Walmart in the same plaza.  His family has been faithfully active in our parish.  María Luz was a catechist in Mexico. 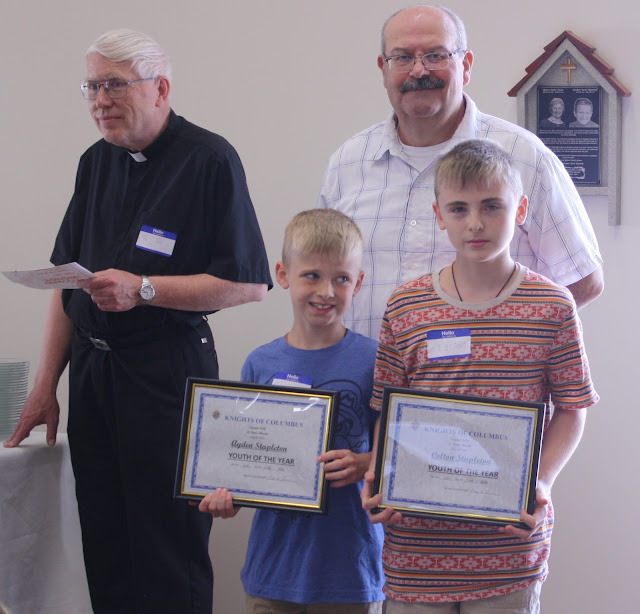 YOUTH OF THE YEAR. Ayden and his older brother Colton Stapleton, sons of David and Kara Stapleton, receive the “Youth of the Year” award.  Both of them were very faithful in being altar servers at the 8 am Sunday and daily Masses and then return for home schooling.  Ayden also had the best poster in the “Keep Christ in Christmas Contest”. 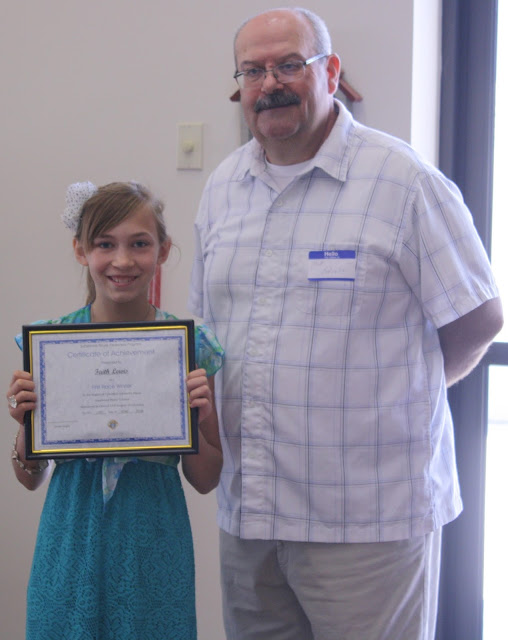 Fr. Timothy Kozak, former pastor of Sacred Heart Church in Pomeroy, received the “Chaplain of the Year” award.  He was not able to attend.  A former computer specialist before becoming a priest, Fr. Tim is probably the very first pastor to design and establish internet websites for both his parish and his local Knights of Columbus council.


Posted by Paul Sebastian at 10:01 PM No comments: