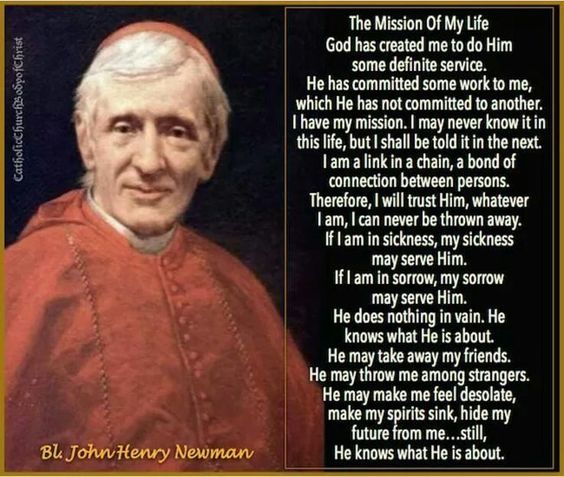 Today Sunday October 13 five holy men and women were canonized.  The most prominent is Blessed John Henry Cardinal Newman.  Bishop Robert Barron believes that Newman is perhaps the greatest theologian since St. Thomas Aquinas; perhaps the single greatest influence upon the Vatican II Council (1962-65) that began 72 years after his death in 1890.   He loved truth about God with a passion.  The inscription he arranged over his grave read:  “Ex umbris et imaginibus in veritatem (From the shadows and images into the truth)”.  He was a noted writer of prose and even poetry, one of the best stylists ever of the English language.  A great apologist and educator, Newman was one of the first to put Catholic thought in dialogue with the very secular Enlightenment.
The Oxford Man as a Student, Tutor, Fellow, & Professor.  Born an Anglican in 1801, his father, a banker, sent him to Oxford at the age of 16 after a deep conversion a year before.  Oxford gave Newman his intellectual and spiritual formation and livelihood until forced out because of his conversion to Catholicism in 1845.  However, before his death, he was allowed to come back and today there is a statue if him on the campus.  Oxford always was a part of him.

Newman was very much influenced by John Kebler, who wrote the “Christian Year”, a version of Anglicanism based on Catholic tradition.  Newman looked for a sacramental basis in Anglicanism and a middle way between Protestantism and Catholicism.   He was impressed by the early expressions of ancient Christianity, not by contemporary Catholicism which he then considered superstitious and not patristic (the Theology of the early fathers of 100 – 451 AD). 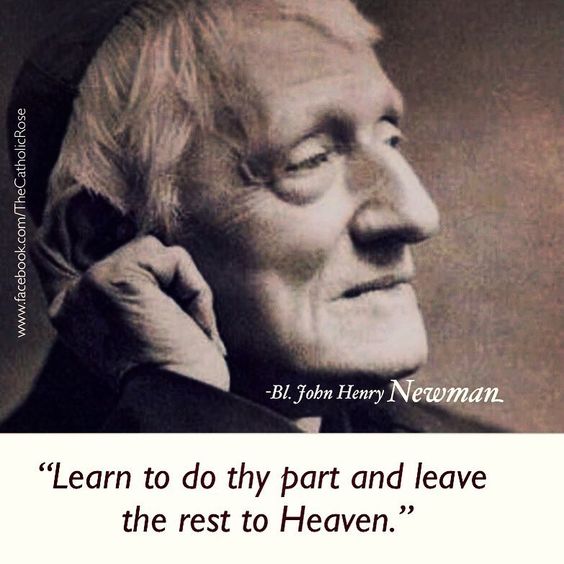 In 1833, Newman became a leader in the Oxford Movement, which promoted the reinstatement of early Christian traditions in Liturgy and Theology.  The members wrote tracts on church life and Theology.  They were especially interested in St. Augustine and the teachings of the early Church Fathers as the basis for Christian belief.  The movement had three basic principles: 1) Dogma – for intellectual substance and against Liberalism that claimed that dogma was an expression of feeling; 2) a Visible Church with sacraments and rites which are channels of grace; 3) Anti-Roman (later rejected by Newman) – the belief that the Catholicism wondered away from the Church of the Apostles and the Early Church Fathers by substituting the authority of the Church for that of the Church Fathers.  It objected to devotion to Mary and the saints.

Tract #90, Newman’s last, was the most controversial since he went against some of the 39 Articles of Anglicanism, the basic tenets of belief of the Church of England.  At the time to advance professionally, to be a professor, or hold public office, one had to take an oath of belief.  As a result Newman was vilified as a traitor all over England.  He then resigned from the movement’s leadership.  Although he would read his many lectures in a droning monotone, they were masterpieces of English literature with its rich prose, Biblical depth, and theological splendor.  Thus his lectures and sermons were in great demand.

A Slow Meditative Struggle to Conversion to the Church.  Newman retired to Littlemore near Oxford, to pray, study, and write.  His desire to catholicize Anglicanism was considered a betrayal.  After  closely reading his beloved Church Fathers of the 4th & 5th Centuries on the identity of Christ, Newman  concluded that the Catholic Church was orthodox.  Inscribed on his home altar was his motto: “Cor ad Cor Loquitur” (Heart speaks to heart).  He began to believe that the Church across space and time best judges the truth of Christian doctrine. 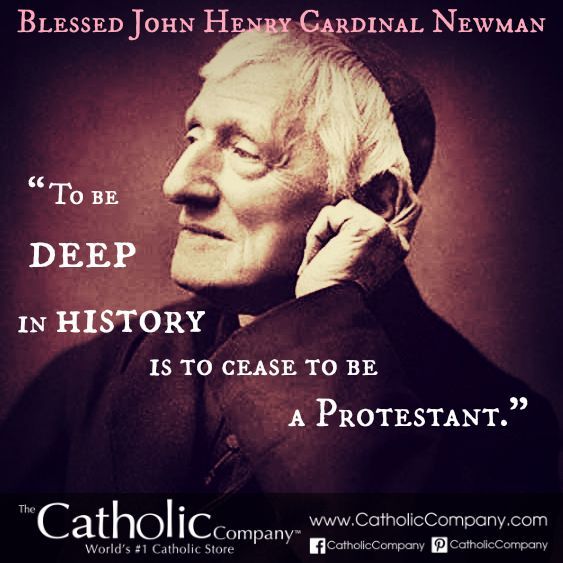 In 1845 John Henry Newman asked an evangelist of the Passionist Order, Fr. Dominic Barberi to receive him into the Church at his home in Littlemore.  The news of the conversion of the nationally known figure was shocking to Anglicans who had broken away from the Church in the 16th Century.  Disowned by his colleagues and the establishment and forced to leave Oxford, all left him heartbroken.  Losing everything, Newman had the integrity and courage to follow God and His truth regardless of the consequences.

Ordination and the Oratory. To become a priest one of the all-time great theological minds had to study with young seminarians at Propaganda College in Rome…….a difficult act of humility before being ordained in 1847.  He found the seminary education to be defensive and cramped…..in need of reform.  While in Rome, Fr. Newman joined the Roman Oratory of St. Philip Neri, composed of secular priests, living together under a rule, but not vows.  He was drawn by the intellectual discipline and example of St. Philip Neri.

Feelings of Rejection, Apparent Failure, and Renewal.  Now the future saint was rejected by Anglicans and looked upon with suspicion by Catholics as a former Oxford Professor and Protestant cleric.  In 1849 Fr. Newman founded an oratory in Birmingham, England and later in Dublin, Ireland.  He wrote the “Position of Catholics in England”.

In 1851, Archbishop Paul Cullen, the Primate of Ireland, asked him to found and direct the Catholic University of Dublin.  Again he faced rejection by the Irish bishops for his novel ideas and resigned from the university in 1859.  Rambler Magazine asked him to be its editor, but had to resign a year later after writing another controversial article: “On Consulting the Faithful on Matters of Doctrine”.  Nor was the conservative Pius IX pleased.

In 1864 in answer to an attack by Charles Kingsley, Fr. Newman wrote “Apologia Pro Vita Sua”, an autobiography of his conversion, eloquently showing why he converted.  Its positive impact turned things around; again he was a respected major figure in demand as a speaker and writer.  Pope Leo XIII made him a Cardinal in 1879 at the age of 78 without ever being a bishop. John Henry Cardinal Newman died at the Birmingham Oratory in 1890.


Pope Benedict XVI, an eminent theologian himself who was influenced by Newman, beatified him in 2010 in London.  The future saint was so modest that he did not consider himself a theologian.  Today Cardinal Newman is considered to be one of the most influential theologians of all time.  For more information see
www.newmanfriendsinternational.org.

See the 52 minute DVD by Bishop Robert Barron on “St. John Henry Newman | CATHOLICISM: The Pivotal Players” with great photography on You Tube at
https://www.youtube.com/watch?v=xSJviI29C2w.
The Volume 1 six DVD set as well as Volume 2 and Volume 3 can be ordered from