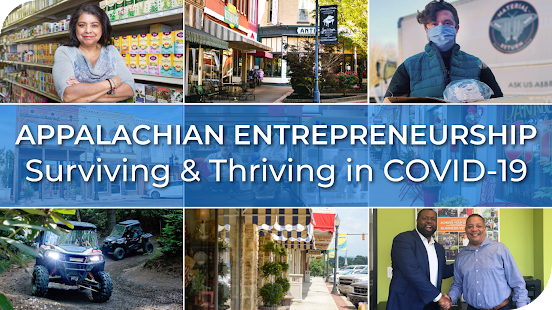 The following is an article I wrote in 1996. The examples cited are up to 22 years old, but how much has changed in underdeveloped areas of rural America, particularly in Appalachian Ohio (southeastern) and West Virginia? The state governments have tried to develop the region with some success. There are some new roads, some new industry, new schools and trade schools, and community colleges.  Images of 2020, which I added later, are above.

There are incubators to stimulate entrepreneurship and loan programs to help small business from where most new jobs come.  The most prominent business incubator and training program in southern Ohio is the Ohio State University Endeavor Center (OSU Extension) in Piketon. See http://extension.osu.edu/news-releases/archives/2011/february/ohio-states-endeavor-center-bolsters-southern-ohio-economy

The University of Rio Grande offers a master degree in Business Administration with a concentration in Entrepreneurship.  It also offers a certificate in Small Business Management to complement any major.  In addition the different majors in the School of Business place a certain emphasis on entrepreneurship and it has a Small Business Entrepreneurship Center (jwinters@rio.edu).  See http://www.rio.edu/academics/page.php?ID=schoolofbusiness.

Nevertheless, the region is still poor as coal is in decline.......at least in southeastern Ohio. The current stagnant national economy is not helping. Appalachia, underdeveloped for years, has made significant progress, but still has a long way to go. Nevertheless there is great potential and much hope. Thus the following article still has a certain freshness to help stimulate individual initiative and erase negative attitudes and defeatism that drive our best young brains to the cities and other parts of the country.
COUNTRY SOIL STILL FERTILE FOR SMALL BUSINESS
(Originally Published in Early 1996 in Business Views of the College of Business, University of Rio Grande)
An article by this title in the Wall Street Journal (Sept. 8, 1989) claimed that entrepreneurs are spurring a comeback in small rural towns. Broken Bow, Nebraska (population 3,800) had been on its way to becoming a ghost town as a result of a six year farm recession in the eighties. Three banks and one third of the downtown businesses failed, but small business entrepreneurs brought it back to vitality. New ventures included making grounds maintenance equipment and housewares, shops, a restaurant, telemarketing, etc. These created over 100 jobs in three years plus a multiplier effect of other jobs to support the new employees.
For example, Bob Goodner discovered that he had a talent for woodworking (by the way a two year program at Rio) when he pursued it as a hobby after losing his job in a farm equipment business. Refusing to abandon his roots in Broken Bow, he was soon crafting shelves, wall hooks, and other housewares. This led him to crafts shows and to a friend's business where he learned more about both woodworking and business. Now Goodner's fine wood sells products in 30 states as most of their $200,000 in sales comes from out of state.
"There's so much talent out here", Goodner observed. Chard Hirsch, a dress shop owner, was even more enthusiastic. "I don't think {people in] rural America have a good grasp on their abilities. There has to be someone who stands there and yells and screams and stamps his feet and says 'Let's do it! LET'S DO IT!'"
Can the same be said of the many towns of the four county area, such as Gallipolis, Vinton, Rio Grande, Jackson, Wellston, etc.?
Closer to home, U.S. News and World Report noted in its May 6 issue that there are "Signs of Hope in Appalachia". Ed Pierce, a son of a coal miner, left Reedsville, West Virginia in search of opportunity in Washington, D.C. After working for the Bush Administration, he and his wife, a school teacher, had enough of the crime and high cost of living in the nation's capital. They decided to come back to their roots in Appalachia and start up their own business, Advanced Computer Technologies. It now generates $1.2 million in annual sales by selling software and computers on the Internet to as far away as Italy and provides employment to two workers at $20 an hour. In addition, some large companies such as Bell Atlantic's directory assistance operation, has moved into the area.
All of this confirms some of the things that came out of a discussion of a few business professors at the College of Business. Dr. Krishna Kool, Dean of the College of Business, noted: "Small business should not set its sights only upon the immediate area as its market, but the entire state of Ohio, the USA, the world". We have a great reservoir of hard working low cost talent in the area in different trades as well as in the professions. Our university is certainly doing its part in developing talent in the classroom and helping local enterprises with its Small Business Institute.
The area has access to the Ohio River and abundant electric power to attract larger industry, not to mention its infrastructure of highways rather close to two interstates. The area is very livable and wholesome to raise a family without the congestion and fears so common in the big urban jungles. At the same time, cultural, educational, and recreational facilities are growing.
If rural areas with less resources can make great strides, we can do at least as well or better. Can the four county area cultivate and develop the entrepreneurial spirit that can transform dreams into reality? There are many sources of assistance for budding entrepreneurs with a feasible idea and the will to make it work.....from the Small Business Administration to the University of Rio Grande.
Posted by Paul Sebastian at 4:08 AM