STILL SUFFERING FOR GOD AND COUNTRY
Published in the Gallipolis Daily Tribune November 13, 2011 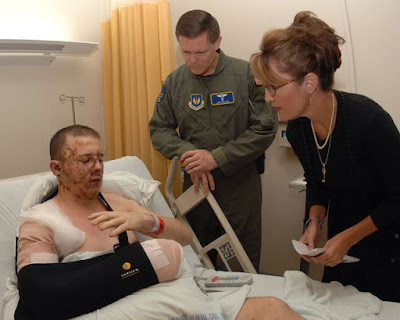 It all started in the 1960s when we sent advisers to South Viet Nam under the Kennedy Administration to stop the advance of Communism and I think it helped. With the aid of Communist North Viet Nam and the Soviet Union, the Viet Cong got stronger and after the Gulf of Tonkin attack on one of our ships, we sent our first contingent of combat troops. The Viet Cong continued to get stronger and we sent even more troops until the number peaked at 543,482 by April 30, 1968. The public, especially young liberals, vehemently demonstrated for withdrawal of all troops until the Nixon Administration abandoned South Viet Nam to the Communists in 1973, naively believing that North Viet Nam would follow the terms agreed upon through long negotiations. A total of 58,202 men made the ultimate sacrifice in Viet Nam and of the 2,709,918 (see http://www.uswardogs.org/new_page_18.htm) who served there, many of the surviving 850,000 veterans (a much lower longevity than the national average of 74 years old) are still suffering to this day.......perhaps up to 1000 in Gallia County.

Never in our history have veterans been treated so shamefully after returning from war. After sacrificing a year of their lives in Viet Nam risking life and limb, these veterans came back to face shameful abuse instead of gratitude for serving our country. They were called baby killers, jeered, spat upon, and ostracized. The great majority did not volunteer for Viet Nam as such; 24% were drafted. They did not want to fight in any conflict. War is hell. They did not elect to be draft dodgers or flee as cowards to Canada. They obeyed the call to duty from their country and generally served to the best of their ability with valor and sacrifice in the sweltering jungle heat in the midst of booby traps, not knowing who is friend and who is foe in each village. No wonder big mistakes were made at times. One former student of mine with terrible war experiences (Rio Class of 1997 I believe) to this day is so paranoid that he is afraid to walk into a department store, expecting to be stared at, pointed at, and being called a baby killer.

Another Gallia County resident, on disability due to his service in Viet Nam, instinctively has the urge to dive for cover when a car backfires or a fire cracker goes off. He still has panic attacks, PTSD, a heart problem, and can't stand crowds. It's very scary to be on perimeter guard duty at night around a jungle outpost fixing helicopters and keeping them in the air. John Stapleton related that he had to wade through a swamp full of Agent Orange, causing the peeling of his skin and numbness even today. The scars remain. Twenty, thirty, and forty years later one veteran after another has come down with cancer due to agent orange, a strong carcinogen with long range effects. Troops were sometimes in the area when it was sprayed to defoliate the jungle to expose the Viet Cong and their movements. Agent orange was in the dust that would be stirred up and inhaled every time a truck passed. According to the Bill Mangus, Commander of our local VFW chapter, more veterans have died from agent orange after the war than who were actually killed in combat during the war. He also claims that some have numbness and heart disease from it. Only recently after 41 years was he diagnosed with the common Post Traumatic Stress Disorder or PTSD (http://www.ptsd.va.gov), which may include paranoia, fear of crowds, night mares, flashbacks, etc.

Thousands and thousands are still suffering for their country, some over 40 years later. The maimed with loss of limbs or limited use of them, scars, numbness and other physical ailments are more obvious. But what about the less obvious, who continue to suffer from the mental and emotional scars, especially PTSD? Most can still function, but others cannot, including a number of homeless veterans. Many don't want to talk about their war experience; war is hell. It's not the glory of a John Wayne war movie or a zip & zap video game.

There aren't many veterans of World War II and Korea left. We can't forget them. Anthony Klimasz, who followed General Patton from the invasion of Sicily to the Battle of the Bulge, took a troublesome head wound to the grave in 1991. Another friend, Stanley Belback was part of the second wave of the Normandy invasion. Men were mowed down like flies around him. A bullet headed for his chest glanced off a bead of the rosary he was wearing and thus God spared his life until the turn of the new century. Today we have a new generation of veterans who have served in the two Gulf Wars and Afghanistan.......suffering the same as the veterans who preceded them except for the effects of agent orange.

I, as a peace time veteran, had it easy with a great assignment in Orleans, France and got to see most of western Europe and the Holy Land. So there isn't much to thank me for except for trying to be ready in case of a Soviet onslaught ---thank God it never happened since that would have been World War III--- after Khrushchev put up his wall in Berlin in 1961. But we owe so much more to our veterans who served in foreign wars. Visit your local VFW (www.vfw.org) and American Legion (http://www.legion.org) halls and you'll meet them (I'm not even eligible for the former and barely for the latter.)

So our country has a great debt of gratitude to our veterans, both living and dead, especially those who have served in foreign wars. THANK YOU ALL SO MUCH for what you have done for God and Country and so many are continuing to do to this day, still nursing the aftereffects. And you dear reader, anytime you meet a veteran, or see one wearing a Viet Nam cap in the mall.......please thank him even if you were against the war because he still tried to serve you. He'll appreciate it. For the Viet Nam vet, it's a long time coming. They tell me that only recently did they receive any thanks. There wasn't any then. And finally, please pray for all vets and those who are now on active duty.
Posted by Paul Sebastian at 11:15 AM

Email ThisBlogThis!Share to TwitterShare to FacebookShare to Pinterest
Labels: Veterans