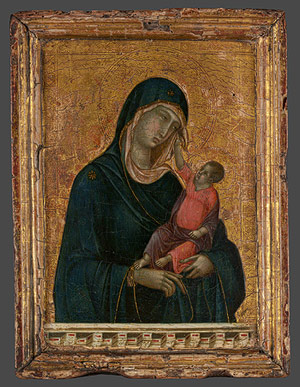 The beautiful month of May is special in giving a temperate preview of summer as the Spring flowers are in bloom.  Since the Church dedicates this month to Mary, let us examine her role in the Church.

One of the biggest problems for prospective converts besides the Eucharist is Mary.  But she should not be.  We don't worship her.  We honor her as we honor any other hero of our country.  Yes, we do ask her to pray for us the same as I would ask you to pray for me and for the success of our Newman Club even though we all believe that there is only one mediator between God and man.  Millions over the centuries flock to the many great and often magnificent churches or shrines, full of art such as Notre Dame in Paris and Chartres France, to honor Mary, to ask for her help through her prayers to God, and for her motherly nurturing.  The United States has in its capital, Washington D.C. the magnificent Shrine of the Immaculate Conception of Mary, its patroness.  The basilica took years to build.

Any devotion to her is optional.  However it is considered as Church doctrine and required belief that she was immaculately conceived without the stain of  original sin and that she was bodily assumed into Heaven as we will be at the Last Judgment.  Since her womb was the first tabernacle and the new Arc of the Covenant that carried God Himself, it is only logical that God would create her without original sin and would not let her body deteriorate in the earth.  This is based upon Church tradition handed down by the apostles, but not recorded in the Bible.  The writings of the early Church Fathers of the first three centuries do mention her.  They refer to Mary as the new Eve who said yes to God at the Annunciation by the Angel Gabriel (See http://principiumunitatis.blogspot.com/2009/11/early-church-fathers-on-mary-as-new-eve.html  and http://www.staycatholic.com/ecf_immaculate_conception.htm).

Mary's role in the Church is to nurture the Faith, to bring us closer to her Son, and to help us to follow Him and His teachings.  We see some of this at Cana in the Gospel of John 2:5 where Mary instructed the chief steward:  “Do whatever He tells you”.  After all the role of a mother is to nurture and she is our mother whom Christ gave to us from the cross before He died.  After giving Himself in the Eucharist on Holy Thursday and while redeeming us on Good Friday, He gave us His mother with the words Woman, behold your son” and to St. John by his own testimony, “Behold your mother” John:26-27).

The Immaculate Heart and the Sacred Heart are in such intimate union, that she would only do the will of her son.  She has no power in herself.  Any power that she might have, is given to her by God to carry out His will.  She is completely dependent upon Him.  Mary is like the moon and in reflecting the light of the Son.  Examples of her nurturing are through her apparitions and resulting shrines.  There are hundreds of claimed apparitions, but relatively few are approved by the Church as worthy of belief (See http://www.catholicdoors.com/isit/approved.htm).  However, Catholics are not required to believe any of them.
Lourdes.  The Catholicism Series only mentions the shrines of Guadalupe, Fatima, and Lourdes, where thousands of healings have occurred.  However, only about 75 have passed the strict scrutiny of the Church (a panel of doctors) as being beyond human explanation.  Among the thousands of sick who go there for healing, a significant number are actually healed physically, but almost all of them undergo a certain healing of soul.  They become closer to God and are better able to cope with their great crosses.  Any miracle, used to support the beatification or canonization of a saint as a sign from God that he or she is a person of extraordinary holiness and heroic virtue, must pass the same scrutiny.

At the Shrine of Our Lady of Guadalupe in Mexico City over the main altar of the Basilica is the miraculous image which appeared on the tilma of Juan Diego when he presented the roses that Mary sent to the Bishop as the requested sign.  The image is full of symbols that only the Aztecs understood as a message that they should follow the religion of the Spaniards.  In a few years 8 million Indians converted to the faith, replacing all of those lost to Protestantism during the Reformation.  Thus Mary is the greatest missionary of them all.  The sash Mary is wearing indicates that she is pregnant.  Thus Mary has been designated as the "Patroness of the Unborn".  The fact that the Aztecs then stopped making human sacrifices of adults, children, and babies to their pagan gods connects her intimately to the Pro-life Movement.  See my blogs #104, 105, and 106 for more detail.
Is the Hail Mary prayer biblical?   Absolutely.  “Hail Mary full of grace, the Lord is with thee” (Luke 1:28 in the Annunciation).  Blessed art thou among women and blessed is the fruit of thy womb (Luke 1:42 in the Visitation).  Were the Angel Gabriel and St. Elizabeth worshiping Mary?  Obviously not.  The second part of the prayer continues:  “Holy Mary, mother of God, pray for us sinners now and at the hour of our death amen”.  Clearly, the prayer first honors Mary and then asks her to pray for us, not worshiping her at all.  She was overshadowed by the Holy Spirit the same as God in the cloud overshadowed the Arc of the Covenant of the Israelites during the sojourn in the desert.   In Christ, the human and the divine come together.....true God and true man  Thus Mary is indeed the Mother of God, i.e., the human nature of Christ.
There are only two religions in history that have placed a woman in such high esteem......the Catholic Faith and the Orthodox which broke away in 1054.

Fatima.  Interesting is that the Qur’an devotes the entire chapter 5 to Mary as the most perfect woman that God ever created (See http://campus.udayton.edu/mary/QuranAndMary.htm).  Also interesting is the Muslim source, http://www.mostmerciful.com/jschinqr.htm.   Fascinating is the fact that when the Moors conquered and occupied most of Spain and Portugal, the Muslims named a small Portuguese town, Fatima, after Mohammed’s favorite daughter, Fatimah.  It was no accident that Mary chose that little village as the place of one of her most famous apparitions to three shepherd children in 1917.  Is Mary reaching out to Islam?

At Fatima Mary said that World War I would soon end, but if the world did not repent, there would be a  worse world war; Russia would continue to spread its errors; and there could be even a third world war.  That was before the Russian Revolution.  Shortly before the start of World War II there would be “a night illumined by an unknown light”.  My blog #95 has a clipping from the London Times of January 27, 1938 that documents it and that same blog has other photos and explanations in regard to the apparition.

The Rosary.  Mary asks us to pray the rosary to bring us closer to God.  The repetitive prayer serves as background music while the focus is on meditating on either the Joyful, Luminous, Sorrowful, and Glorious Mysteries in the life of Christ and Mary, almost all of which is Biblical.
Thus we can see the truth in the old Catholic saying:  “To Jesus through Mary”.

Email ThisBlogThis!Share to TwitterShare to FacebookShare to Pinterest
Labels: Mary, The Faith