May 1 has been celebrated throughout the Communist world as May Day to commemorate the Hay Market Massacre in Chicago.  From April 25 to May 4, 1886 Chicago unionists, reformers, socialists, anarchists, and ordinary workers demonstrated for the eight hour day with the same pay as the normal ten at least 19 times with a dozen or so clashes with the police, three with shootings and two were killed.  At this time the union movement was in its infancy and met with vehement resistance by companies.  About 35,000 workers walked off their jobs with agitation for a general strike at all work places.  Police fired on strikers at the McCormick Reaper Plant; violence ensued; and police fired on the strikers, killing two.

Leaders called for a protest meeting at the Hay Market on the evening of May 4 with one inflammatory leaflet agitating for revenge.  Although the mayor who attended instructed the 177 police not to disturb the meeting, the officer in charge ordered the crowd to disperse.  Someone threw a bomb and the police fired indiscriminately into the crowd, much like the Kent State shootings on May 4, 1970 when inexperienced National Guardsmen killed four students died and injured several others (http://dept.kent.edu/sociology/lewis/lewihen.htm).  Sixty police were injured and eight died.  Many in the crowd were killed or wounded.  The city of Chicago then suppressed picketing, meetings, and the radical press.  Seven of the striking leaders were sentenced to death based on a conspiracy theory with little or no evidence.  It never was determined who threw the bomb (http://www.encyclopedia.chicagohistory.org/pages/571.html , http://dwardmac.pitzer.edu/anarchist_archives/haymarket/haymarket.html).

In memory of the Hay Market Massacre Socialists and unionists around the world adopted May 1 or May Day as an international workers' holiday.  In the 20th Century the Soviet Union and the Communist World officially adopted it.  Thus it never caught on in the United States except for a period before World War I.  May Day is still celebrated in many nations of the world, especially in Latin America, Eastern Europe, and the communist countries (China, North Korea, Vietnam, Laos, and Cuba).  The communist countries have traditionally celebrated with big parades celebrating the Socialist Revolution with supposedly promises a workers paradise with equality and a equitable distributions of goods plus showing off their technological progress and modern armaments. 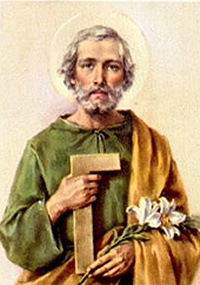 In reaction to the atheistic communist celebration of May Day in honor of their workers and the revolution against capitalism, Pope Pius XII adopted the same day, May 1 in 1955 as the Feast of St Joseph the Worker.  The painting below shows that Christ came from a working class family with St. Joseph the Carpenter as its head.

ST. JOSEPH THE WORKER: MODEL OF A TRUE MAN OF GOD 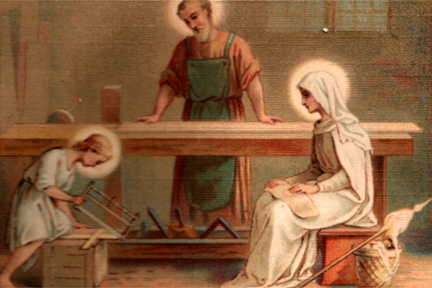 Why is St. Joseph a model of a true man of God? The Bible says little about St. Joseph and does not quote him at all. Yet the biblical accounts of St. Joseph demonstrate or imply several of his virtues; tradition shows others.....stories written and unwritten that have been handed down through the generations.

Ever Chaste. According to tradition, Mary's parents, Joaquin and Ann asked God for a sign as to which man would be best for their daughter. Within a group of men St. Joseph's staff suddenly sprouted a white Lilly, a symbol of purity.  St. Joseph was ever chaste and able to control his passions and give up the privilege of having children of his own so that Mary could maintain her virginity as God willed.

Sensitivity. We see that in Matthew 1:18-21. When His mother Mary was betrothed (engaged) to Joseph, but before they lived together, she was found with child through the Holy Spirit. Joseph her husband, since he was a righteous man, yet unwilling to expose her to shame, decided to divorce her quietly. Such was his intention when, behold, the angel of the Lord appeared to him in a dream and said, “Joseph, son of David, do not be afraid to take Mary your wife into your home. For it is through the Holy Spirit that the child has been conceived in her.. She will bear a son and you are to name him Jesus, because he will save His people from their sins.”

St. Joseph shows sensitivity in not exposing Mary to shame and protecting her from scandal or even stoning. Thus he tried to quietly separate from her. But Joseph obeys the angel without question and trusting in God, takes Mary into his home and provides for his wife and child.

Complying with the decree of Caesar Augustus for a census, Joseph took his pregnant wife on a trip of at least four days to travel the 80 miles from Nazareth to enroll in Bethlehem the city of David because he was a descendant of David. They had to patiently cope with the uncertainty that Mary would have to give birth on the side of the road as they continued to trust in God throughout their lives.  Thus they probably traveled slowly with frequent rest stops during a long, tiring, and bumpy ride.  According to tradition, Mary rode on a donkey and Joseph showed toughness in walking at their side. He did the same in the over 300 mile flight to Egypt and annual trips to the Temple in Jerusalem for the Passover.

Once in Bethlehem they could not find room in any of the inns and had to resort to the humiliation of staying in a stable. On top of that Mary gave birth to the Christ child. Joseph courageously coped with these difficulties, continued to trust, and made the best out of a bad situation which was transformed into the joy of the promised Messiah’s birth.


Clearly, St. Joseph has the role of protector from the brutal Herod and on the long and arduous journey of a couple weeks to travel over 300 miles to an unknown land, Egypt. According to tradition, a Coptic church in Cairo Saints Sergius and Bacchus Church, also known as Abu Serga claims to be the site of the home of the Holy Family. Again, Joseph places his trust in the provident God and obeys. Again Joseph bends his will to the will of God, his plans to God's plans. On their return, St. Joseph is prudent in not returning via Judea for fear that Herod's son, Archelaus now king of Judea and even more violent than his father, would put the Holy Family in danger again. Thus Pope Leo XIII entrusted the Church to the protection of St. Joseph. Being a quiet man and dependent upon God demonstrated his humility.


In the presentation in the Temple and going there every year for the Passover, St. Joseph is faithful to Jewish law. They presented and consecrated Mary's first born son to the Lord while sacrificing two young pigeons (Luke 2:22-24).

When the 12 year old Christ child was lost in the Temple (Luke 2:41-52), Joseph and Mary had “great anxiety”. Surely thoughts of failure in their mission entered their minds, but Joseph must have had the faith that God was in control and would work it out.

Physically Strong and Rugged. St. Joseph was a carpenter and according to custom trained his son in his trade.  They worked together during those hidden years which are not recorded in scripture.  We can only draw on tradition, private revelation to the mystic, Anne Catherine Emmerich as well as legend and speculation.  Holy pictures show a small carpenter shop for furniture making.  But some scholars say that St. Joseph and the young Jesus were construction carpenters that did heavy work.  Therefore both St. Joseph and his son were strong, rugged, and tough, epitomizing the dignity of work as creating with God.  St. Joseph was able to walk the 80 miles from Nazareth to Bethlehem and over 300 miles to Egypt.  This contradicts some popular depictions of St. Joseph as effeminate.  Thus Christ was able to walk all over Palestine and drag the cross or carry the crossbeam which weighed 100-150 pounds.  Clearly, St. Joseph served Mary and Jesus by being the breadwinner and by providing for the Holy Family.


Piety. St. Joseph, being a pious man, certainly led his family in prayer and taught his son how to pray and observe the mosaic law.  He probably took the Holy Family to the synagogue every Saturday.  In his Gospel St. Luke (2:41) explicitly states in his Gospel: “Each year his parents went to Jerusalem for the Feast of the Passover”. Each time the angel communicated God's will that the Holy Family should flee to Egypt and again when to return, it was to Joseph, the head of the family. Clearly St. Joseph was the spiritual and material leader of the Holy Family. His quiet way indicated that he loved his family without being controlling.


So we can see that St. Joseph was holy, a self-giving husband, a loving father, and a true man in every respect as God intended.  ST. JOSEPH, MODEL OF A TRUE MAN OF GOD, PRAY FOR US.

Posted by Paul Sebastian at 9:06 PM

Email ThisBlogThis!Share to TwitterShare to FacebookShare to Pinterest
Labels: History, Saints and Heroes, The Faith