(82) National Day of Prayer: Prayer for the Military and Veterans Still Hurting

The National Day of Prayer has been an annual observance since 1952 when Congress officially established it.  Every year the President of the United States and most state governors issue proclamations on or prior to the first Thursday of May.  People all over the United States are asked to assemble at noon on the first Thursday of May at their county court houses to pray for our Country.  If that is not possible or inconvenient, then people are asked to at least pause for a minute or two at noon to pray.  God knows how much our Country needs prayer.

It has been observed at the University of Rio Grande in southeastern Ohio since 1998.  Faculty, staff, students, and guests meet at the gazebo between the Bookstore and the cafeteria to pray for our country. 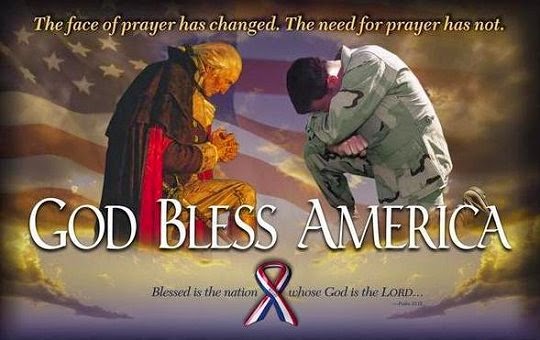 PRAYER FOR THE MILITARY AND VETERANS STILL HURTING

O Lord, we beseech thee first and foremost to grant us Peace in Afghanistan, Iraq, Syria, and the world. Because war is hell, all good soldiers must yearn for Peace, the ultimate goal in which lie their own personal aspirations and the aspirations of the entire Country.

Purify the motives of every soldier to be aware that the ultimate mission of the military in defending our Country is to achieve peace through victory while preserving human dignity to the greatest extent possible....... combatants and non-combatants, friend and foe.......all as children of God.

Protect our troops who are in harm's way.........from enemy and even friendly fire, IEV's, ambushes, and accident.

Guide our NCOs and commissioned officers to lead effectively and to accomplish the mission with prudence and wisdom while caring for their men and women without risking their lives unnecessarily. Remind them to seek your counsel in the life and death decisions they must make.

Remind our men to look out for each other as they all strive to survive in the heat of battle.

Maintain the morale of the troops. Preserve the patriotic and spiritual ideals of our young men and women, their sense of moral right and wrong so that they do not become cynical as they live through the horrors of war while fighting for our Country.

Help our soldiers to treat prisoners of war with dignity as human beings and even with a certain compassion despite the fact that the enemy may have committed monstrous atrocities upon their buddies. Don't let us ever lower ourselves to seek revenge with atrocities of our own.

Inspire our troops to also work for the common good of all........to be effective ambassadors of good will, and win the hearts and minds of the people while accomplishing the mission.

Make our officers ever aware of the consequences of their decisions upon people in regard to the safety of their troops and collateral damage to the populace.......to be prudent in not using more force and causing more destruction and casualties than is necessary to accomplish the mission.

Give our troops the grace to maintain high moral principles on and off base, while on a mission or during a break in the action. Bring them ever closer to you so that they will leave the service as true men and women of God.

Help the families that the soldiers have left behind to cope by themselves with the difficulties of daily living and problems that come up.

Lord, please assist the thousands of veterans in our midst, who are still suffering for us and for our Country with permanent physical injury, loss of a limb, PTSD, flashbacks, and mental anguish.

And Lord, help us to appreciate the sacrifices that the troops are making now and the veterans did in the past and are continuing to make. Help them to adjust to civilian life and to provide for themselves and their families with dignity. Make us sensitive to their needs and don't let our Society tolerate the presence of homeless veterans who cannot function because of the sacrifices they made for us while soldiers.

We ask all of this in your name Oh Lord. We praise you and thank you for loving us so much. Amen. 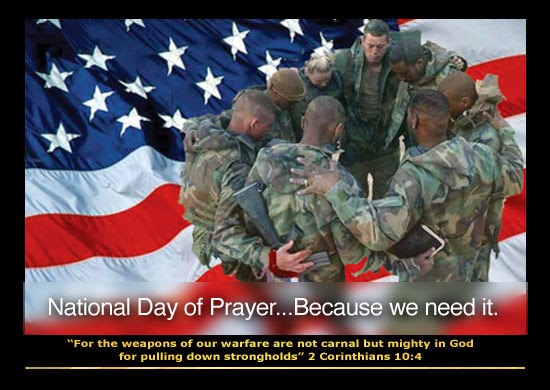 “If my people, who are called by my name, will humble themselves and pray and seek my face and turn from their wicked ways, then I will hear from heaven, and I will forgive their sin and will heal their land.”

1First of all, then, I ask that supplications, prayers, petitions, and thanksgivings be offered for everyone, 2for kings and for all in authority, that we may lead a quiet and tranquil life in all devotion and dignity.  3This is good and pleasing to God our savior, 4who wills everyone to be saved and to come to knowledge of the truth.


Verse I Chose for the Prayer I Gave at Rio

2015 - Psalm 91:2-7  I will say of the Lord, “He is my refuge and my fortress, my God, in whom I trust.” Surely he will save you from the fowler’s snare and from the deadly pestilence. He will cover you with his feathers, and under his wings you will find refuge; his faithfulness will be your shield and rampart. You will not fear the terror of night, nor the arrow that flies by day, nor the pestilence that stalks in the darkness, nor the plague that destroys at midday. A thousand may fall at your side, ten thousand at your right hand, but it will not come near you.

Theme and Verse of the Year