(272) St. Louis Church Participates in Wreaths Across America Honoring Our Deceased Veterans on the 3rd Saturday of December 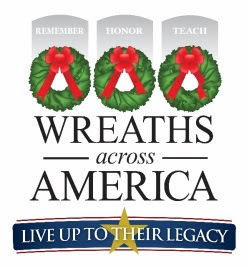 On the 3rd Saturday of December every year (in 2022 it was on December 17) in American cemeteries all over the United States and abroad civic groups and churches lay wreaths on the graves of our deceased veterans who have served our country.  Today St. Louis Church participated for the second consecutive year and is becoming an annual tradition in the parish.

The Catholic Women’s Club (CWC) started it in our parish, namely St. Louis Church in 2021 for the first time as part of the nationwide “Wreaths Across America” project at the parish cemetery…….something their counterparts, the parish Knights of Columbus council never even thought of.  The women simply picked up the ball and ran; they went out and did it.

Thank you, dear women, particularly the CWC president, Margo Marazon for this initiative.  She is a veteran, who served for five years active duty as a Navy nurse.  May our participation in the “Wreaths Across America” become an annual tradition every Advent in our parish.

The goals of the Wreaths Across America movement are: REMEMBER the fallen; HONOR those who served; and TEACH our children the value of freedom. 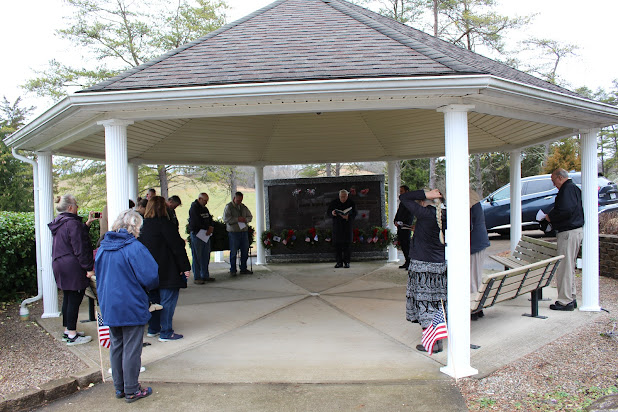 Margo Marizon, who organized this event, opened the program in her Navy uniform at the gazebo of the parish cemetery with a welcome, a description of the Wreaths Across America program, and an introduction of the VFW Honor Guard followed by a moment of silence.  Fr. Thomas Hamm, pastor of St. Louis Church, then continued  with a prayer.  Close to 20 parishioners and relatives of deceased veterans attended on a cold overcast day. 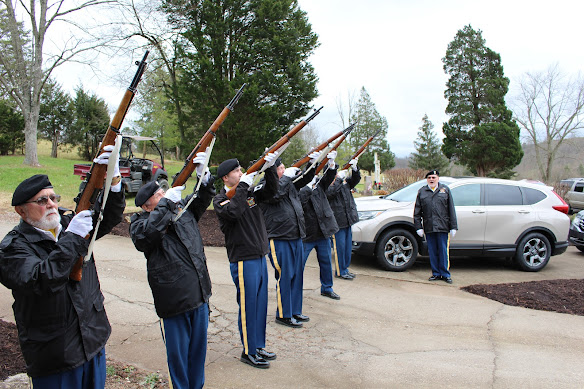 A contingent of the local VFW Post 4464, led by Commander Bill Mangus, then gave a 21 gun salute and their bugler played taps.  The VFW has provided a great service in assisting at countless ceremonies and burials of veterans in Gallia County.  Veterans in attendance saluted during this solemn remembrance. 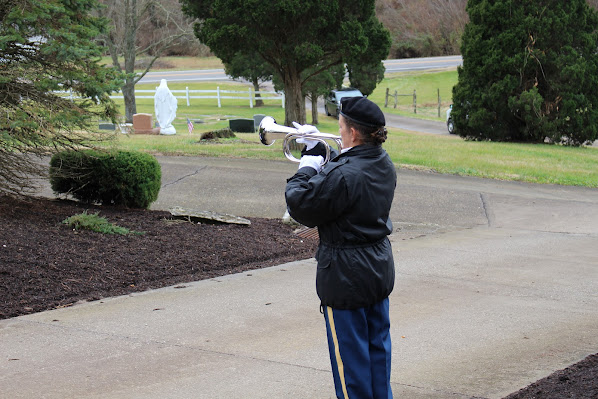 The names of our 25 deceased veterans buried at the St. Louis Church cemetery were read by Bruce Davison, an Army Vietnam veteran and brother of one of the deceased veterans as follows.  The year of death is in parenthesis. 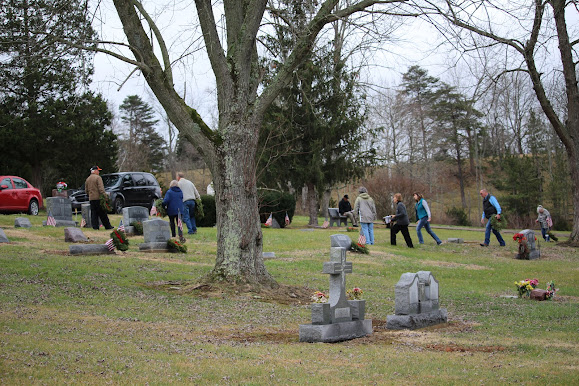 Those in attendance lay the wreaths on the graves of the deceased veterans at the St. Louis Church Cemetery in Gallipolis.

Our pastor then blessed the wreaths.  Those who attended then placed the wreaths on the 25 graves of our departed veterans.  All were then free to silently walk among the graves and pray for the departed. 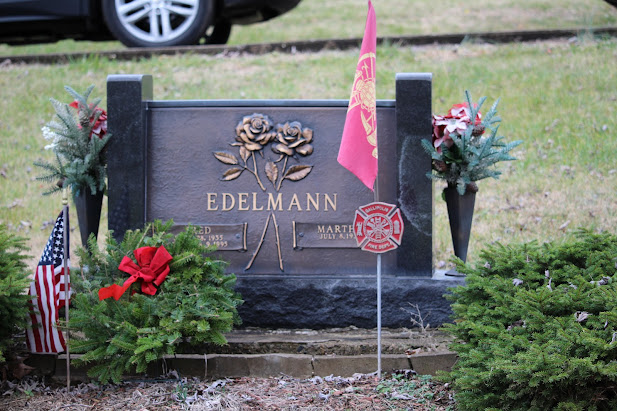 Typical is the grave of Fred Edelmann, who served his country as an army soldier, a civilian engineer, and a volunteer fireman.  His legacy is our monthly KofC Rosary before all of the Masses on the First Saturday and the First Sunday of every month.

There are other deceased veterans who were parishioners of St. Louis Church.  However, they are buried in other cemeteries.  The Catholic Women’s Club is willing to help family members obtain wreaths to place at the graves of their loved ones who are veterans.

How did the “Wreaths Across America” movement start?  Years ago a 12 year old paper boy by the name of Morrill Worchester won a trip to Washington D.C. sponsored by the Bangor Daily News of Harrington, Maine.  His visit to the Arlington National Cemetery, where 400,000 veterans mainly as well as eligible dependents and national leaders are buried, left a deep impression upon him.  Later he founded the Worcester Wreath Company.  In 1992 the company had a surplus of wreaths that he wanted placed on hundreds of graves at the Arlington National Cemetery.  What a wonderful way to honor the millions of veterans who served our country and put their lives on the line for something bigger than themselves…….to preserve the freedoms and founding principles of the United States of America!

With the aid of Maine Senator Olympia Snowe, arrangements were made for the wreaths to be placed at Arlington in one of the older sections of the cemetery that had been receiving fewer visitors with each passing year.  As plans were underway, a number of other individuals and organizations stepped up to help.  James Prout, owner of the local trucking company Blue Bird Ranch, Inc., generously provided transportation all the way to Virginia from Maine. Volunteers from the local American Legion and VFW Posts gathered with members of the community to decorate each wreath.  A special ceremony at the Tomb of the Unknown Soldier was added. 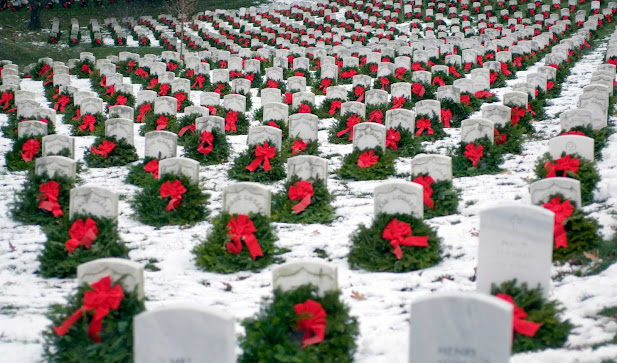 It all started at Arlington National Cemetery in 2005.

In 2005 the photo above of the tombstones at Arlington, adorned with wreaths and covered by snow, circulated around the internet.  Suddenly, the project received national attention.  Soon a movement developed to place wreaths on graves of veterans in local cemeteries all over the country.  In 2007 the Worcester family, along with veterans and others formed “Wreaths Across America, a non-profit 501-(c)(3) organization to spread this movement see https://wreathsacrossamerica.org/).

Today 3400 locations are involved across the USA and St. Louis Cemetery is one of them.  On December 17, 2022 the faithful of St. Louis Church joined in at our cemetery under the leadership of the Catholic Women’s Club.  Next year they will do the same at 2 pm on Saturday December 16.

You can be involved in this national movement as a volunteer, donor, or by recruiting local civic groups and churches in your town, thus helping this movement to grow.  Your group or church can purchase wreaths for $15 each and then mobilize the members to attend at a designated time on the third Saturday of December.  A project chairperson could organize a program that might include prayer, a description of the movement, a 21 gun salute from the local VFW or American Legion honor guard, and placement on each veteran’s grave by a loved one or other persons attending.  You as an individual can order a wreath for a loved one or friend and place it on his grave.  Wreaths can be ordered in November from www.wreathsacrossamerica.org for $15 each.  Click on “Sponsor a Wreath”.

Finding out the names of the veterans at your local cemetery can be a work of love.  A starting point is obtaining a list of the men buried there from the cemetery manager or church secretary.  If they don't know who were veterans, you can check the list with relatives, friends, and local veteran organizations……American Legion, VFW, the local affiliate of the Veterans Affairs Administration (VA), etc.

Women, the CWC needs YOU to become a vital force in this parish and make a difference in the parish community.  Call or text its president, Margo Marazon at 740-707-2567.  The same as the Knights, the CWC needs more younger members to give balance, renewed energy, and creative ideas.  May the knights and the CWC grow to become indispensable aids to the renewal of our parish, complementing each other and also working together for the common good of our parish family. Thanks to Patty Hays for taking the photos and Oscar Bastiani for his help.
Posted by Paul Sebastian at 9:09 PM