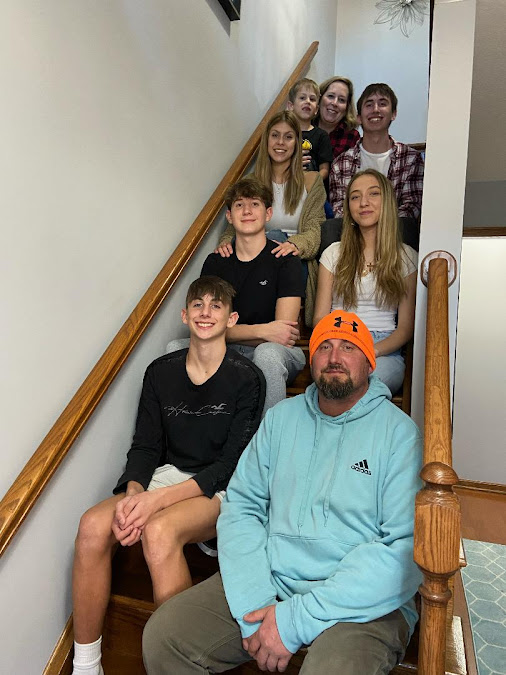 The Frazee family with their new addition, Khrystyna.  From top to bottom left to right we have Theresa, the heart of the family holding Dominic (6), followed by Cara (18) and Garrett (19), Gabriel (16) and Khrystyna (17), Caleb (14), and finally Nathan, the head of the family.

In two previous articles we examined how the Knights of Columbus USA and Poland were helping Ukraine through its ordeal of defending itself against the Russian invasion and providing shelter for a flood of refugees.  We know that the Polish people opened their hearts and their homes to Ukrainian refugees.

We have at least one family headed by a knight in America, who did the same to a young girl from Ukraine……not exactly a refugee, but an exchange student who could not return to her country once the war began.  Brother knight Nathan Frazee and his wife Theresa invited 17 year old Khrysta Svystovych (Христина Свистович in Ukrainian which uses the Cyrillic script) to join their family of seven in Crown City, Ohio.  It took courage for the Frazees because of the uncertainty of how their family and Khrystyna would get along and adapt to each other. 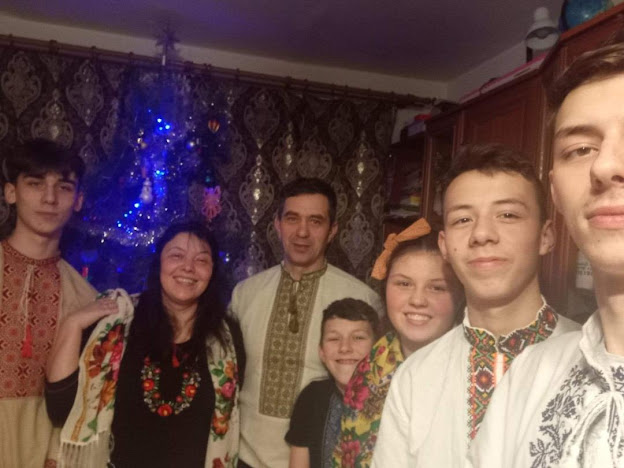 The Svystovych family of eight in traditional Ukrainian folk garb used for festive occasions.  From left to right are: Myhaylo (19), Khrystyna’s mother Tetiana with her husband Vasyl, little brother Hryhorii/Gregory (13), little sister Veronika 16), Vasyl 15), and her oldest brother Volodymyr (20).  Missing of course is Khrystyna on loan to the Frazee family in far off USA.

Khrystyna has always been fascinated by the United States and wanted to learn about its culture.  Visiting America was only a dream until she stumbled upon the Future Leaders Exchange (FLEX) program (https://www.discoverflex.org/) that arranges and finances international exchange programs.  It was providential how Khrystyna stumbled on the program and all the doors opened.

Khrystyna and the Frazee family are a great match.  Crown City, Ohio and Uhnów in western Ukraine near the Polish border close to Lviv, are both rural villages of about the same size.  The Frazee family and the Svystovych family are about the same size (5 kids vs. 6 kids) and have the same Catholic faith.  Brother Knight Nathan Frazee is a former Knights of Columbus Insurance Field Agent, but now a butcher that serves the local beef industry.  Khrystyna’s father Vasyl does home remodeling work in Katowice, Poland and Ukraine.  Khrystyna sees the Frazees as “a real second family easy to adapt to”.

According to her American parents, Nathan & Theresa Frazee, Khrysta has blended nicely with their family as she participates in all of their activities…….board games, attending sports events of her siblings. excursions to the zoo, the beach, etc.  “She’s sweet and wonderful to be around.  Khrystyna is God loving, intelligent, loyal, driven, and loves her family.  She’s strong in spirit and character”.

Khrystyna makes straight A’s in school and also would do well in the more challenging college prep courses if allowed to do so.  Schools tend to discourage exchange students from taking more difficult courses because of problems in adjusting to a new language and the American culture. Khrysta believes that schools in Ukraine are more demanding than here.  Scholastic sports are not developed there. 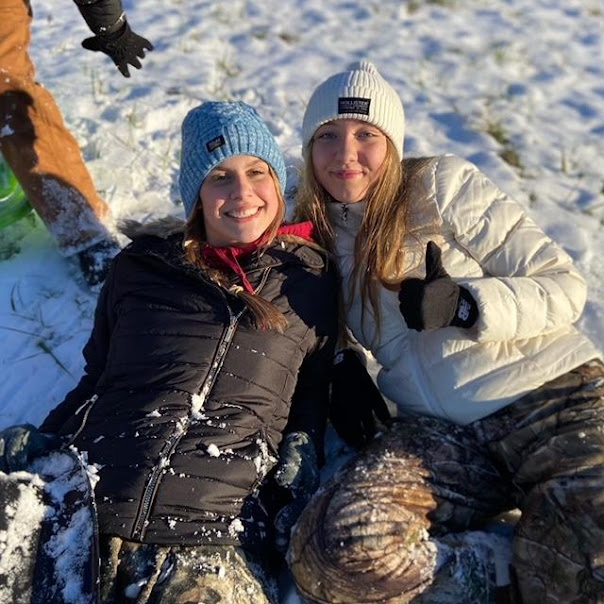 The two sisters enjoying the snow.

The most important family activity is attending Mass every Sunday at St. Louis Roman Catholic Church in Gallipolis.  That’s no problem for Khrystyna because she was raised Greek Catholic.  In Ukraine the people are either Roman Catholic, Greek (Byzantine) Catholic, or Greek Orthodox.  The three are actually quite similar.  In the great Schism of 1054, the Eastern Church broke away from Rome because of political, economic, and doctrinal differences.  However, a large segment of the Orthodox returned in 1596 under the negotiated Union of Brest.

The Roman and Byzantine rites of the Catholic Church have a unity in doctrine and sacraments under the same Pope, but there are differences in the liturgy and customs to accommodate the distinct cultures of Eastern and Western Europe.

During an intense persecution by the Soviet communist government particularly against the Catholic Church, her grandmother had to have her father baptized in secret or face prison.  Her brother Volodymyr is in his fourth year in the major seminary and should be ordained in 2024. 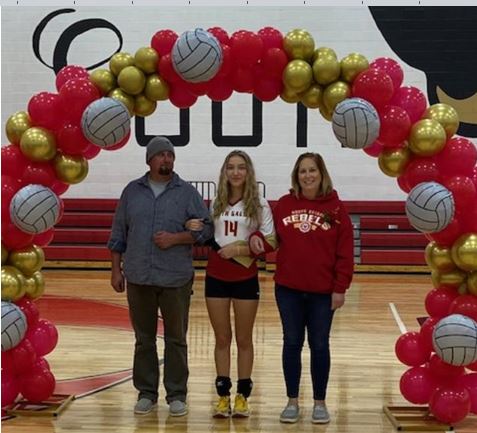 Khrystyna is one busy young lady.  Like other teen age girls around the world, she likes to listen to music, shop, and read.  At South Gallia High School Khrysta plays on the volleyball team, is a cheer leader, and runs both track and cross country.  Cheerleading is completely foreign to her, but Khrysta just had to try it.  Now she leads the cheers of the fans to motivate the basketball team that includes her American brother Gabriel who is one of their best players.

In addition Khrystyna plays the violin and is learning French on her own.  She already speaks Ukrainian, Russian, Polish, and English.  On top of that she has joined the parish St. Vincent DePaul Society which helps the poor of Gallia County and is considering volunteer work with Holzer Hospital.  She likes school and enjoys the teachers who are closer to the students and more caring than in the more formal European schools.

It takes courage for a teen ager to be an exchange student in a foreign land…….alone, on his/her own far away from home, a new and difficult language, a new culture, a strange family to live with.  S/he is unsure of what to expect; so much is strange; so much is unknown.  S/he is on his/her own away from the family far away from home.  A big source of strength for Khrystyna was prayer and her faith.  “I had to trust God”.  After all, she was raised in a Christ centered home.

The struggle has been worth it, making her more independent and self-reliant.  She has learned a new language, a new culture, different ways of thinking and doing things, and made new friends. Khrysta is uncertain about her career goals, but is thinking of working with the Church, perhaps as a teacher after pursuing higher education here or abroad.

It’s difficult adjusting to the USA because things are so different.  Khrystyna noted that Americans are more casual and openly express their emotions while Ukrainians are more reserved.  Americans eat out more often while Ukrainians prefer their home cooking.  Their bread is much richer and more nutritious than ours. 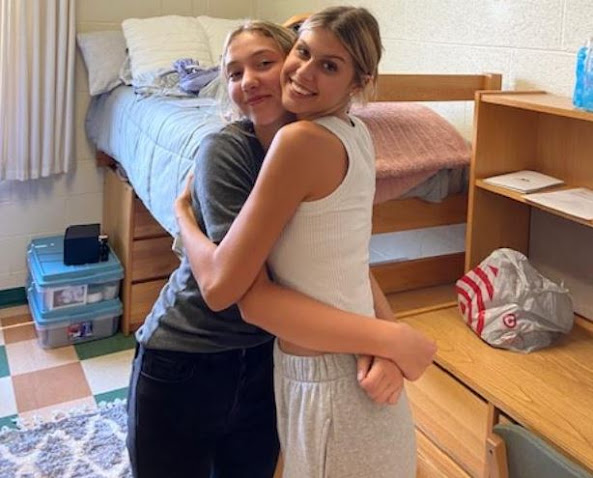 Khrysta gives a goodbye hug to her American sister, Cara in her dorm room as she begins her Freshman year in Biology at the Franciscan University of Steubenville, joining her older brother Garrett, a sophomore Business major there.  Cara, the only Frazee daughter, always wanted a sister and along came Khrysta all the way from far off Ukraine as an exchange student……a wish come true!  They were friends from day one.  Khrystyna enjoys “spending time with my older sister”.

The Frazee family perhaps has gained more than it gave from taking Khrysta into their family.  They are learning about a different culture and how people live outside the United States.  Most important, they have learned gratitude for their blessings.  Ukraine has been forced to fight for its very survival as an independent and free nation and for its culture.  For centuries Russia has tried to dominate Ukraine as part of the Russian Empire, first under the Czars and later under the Soviet Communists.  Although independent since 1991, the Russian government without provocation or cause invaded Ukraine last February to restore its empire of yesteryear.

With the help of western arms and their own heroism as excellent soldiers, Ukraine is winning.  However, Russia has destroyed much if not most of the infrastructure, leaving millions without, electricity, light, and water for a very harsh winter.  Even before the invasion, the Ukrainian people have struggled with low paying jobs when available.  Her family would have to skimp and save to buy what we take for granted.

South Gallia High School certainly has benefitted from Khrysta being one of its students.  Since some of these kids have hardly traveled outside of Gallia County, Khrystyna has brought an international perspective to the student body.  There’s a whole world out there.  Few if any of them will have the opportunity to visit Ukraine, a fascinating country; but Khrysta has brought Ukraine to South Gallia High School.  She’s been sort of an ambassador from her country of birth.  Befriending her is an enriching experience since Khrysta gives us a taste of the Ukrainian culture and we learn a little about Ukraine.  The daily headlines about war torn Ukraine come alive and not simply something abstract going on in a far off land.

Helpful to peace and international understanding is the student exchange programs.  With prior positive experiences, it is difficult to demonize the people of another country during an international dispute.  They are simply people who think differently.  When people become friends, love and trust become easier to achieve than hate.  Then negotiations become easier and conflict is reduced.  Hopefully, more American students will have similar opportunities to study abroad.

Posted by Paul Sebastian at 8:19 PM