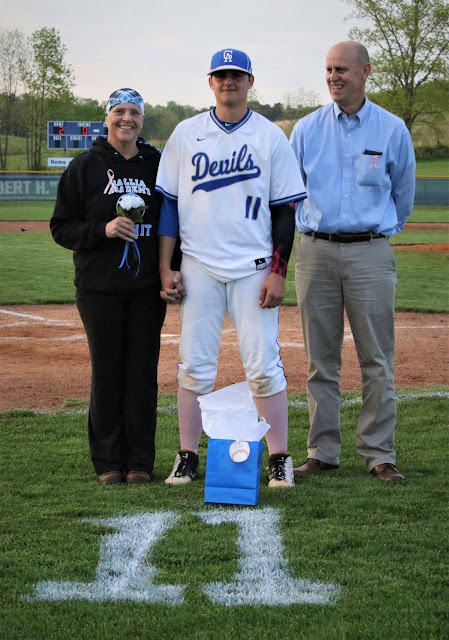 It was a beautiful afternoon for baseball; it was Beverly Faro Day and Senior Night in the game between Gallia Academy and Coal Grove High School.  Mother’s Day came early for her.  After all, she’s like a mother to her son’s close friends on the team.
Beverly is valiantly fighting Stage 3 breast cancer.......painful chemo for now with radiation and surgery in the future.  May all she’s going through make her a saint as she gets closer to God and trusts.  Beverly Faro has faced much adversity like a champion with an abundance of resilient faith, strength, and courage.

All refreshment receipts and raffle tickets went for her treatment.  The players wore pink socks and pink belts in a show of support.  A beautiful act of Christian love was how the fans, boosters, and players rallied to give their support, not only for Beverly Faro, but also for all women suffering from breast cancer.  There's so much evil in the world; yet so much heart warming good in people.

Beverly and Dr. David Faro are raising five children: D.J., a medical doctor in residency at EAMC/WVU; John, a student at the University of Cincinnati Medical School; Kimberly a graduating senior at Kent State University set to enter the Ohio State University Pharmacy School; Jacob, a Chemistry major at the University of Rio Grande; and Josh, a senior at Gallia Academy.  To help them all through college, Dr. David works as a VA Podiatrist and Beverly has worked the night shift skillfully sanitizing vats at Bellisio Foods in Jackson, Ohio.  Last year, this mother of five stated:  “I would make any sacrifice for my children”.

In addition Beverly and her husband David lovingly took in a little girl named Allison as one of their own children for ten years until her birth family was able to solve its problems.  Today she’s studying to become a nurse practitioner.  That generous love is making a difference in a person’s life.
A Baseball Mom and Wife. Her son Josh started at first base and pitched two scoreless innings (the 3rd & the 4th) with five strikeouts and no hits.  This was memorable because he could not pitch since the beginning of the season when the muscle in his elbow tightened because of a shoulder problem.

Josh’s older brother, John played left field for Gallia Academy before graduating in 2013.  He was the only Gallia player to hit a home run out of the ball park built in 2009.  It was a 350 foot drive over the wall in left-center field.  He happens to be my daughter Naomi’s boy friend.

His father shared a gem of wisdom regarding Josh's injury: “God has given Josh a talent as a gift.  He can give and He can take away”.  Our Lord must have permitted Josh’s injury for a reason that will make him a better person. God's perspective is eternity.  Dr. Faro loves baseball and is very knowledgeable of the game.

At another game he added: “Every person is dealt a hand of cards and we must deal with it.”  May we all deal with inevitable adversity with faith, courage, and prayerful trust in God that He will help us to get through it and things will work out for the best in the long run.

The score was tied at 3 - 3 in the last half of the 6th inning and a man on third.  Josh Faro came up to bat and drove in the winning run with a solid hit over 2nd base.  THAT HIT WAS FOR MAMA!!!  He then scored the insurance run on a two out single by Morgan Stanley to make the final score Gallia Academy 5 Coal Grove 3.  For more detail on the game and action photos see
https://www.mydailytribune.com/sports/39608/gallia-academy-sweeps-hornets-5-3.

Post game, the parents processed with their senior sons, including Dr. David and Beverly Faro with their son Josh, a fitting end to a great day.  It was a privilege for my wife Jaga and I to be there and witness it all.

Prayers are powerful.  Please pray for Beverly Faro.  She still has a tough road ahead.  Your prayers can make a difference.

The seniors honored are in the photos below.