(221) Living With Christ, the Great Healer, Through Images of the Holy Land

The Healing at Bethesda.  After this, there was a feast of the Jews, and Jesus went up to Jerusalem.  Now there is in Jerusalem at the Sheep (Gate) a pool called in Hebrew Bethesda, with five porticoes.  In these lay a large number of ill, blind, lame, and crippled.  One man was there who had been ill for thirty-eight years.  When Jesus saw him lying there and knew that he had been ill for a long time, he said to him, "Do you want to be well?"  The sick man answered him, "Sir, I have no one to put me into the pool when the water is stirred up; while I am on my way, someone else gets down there before me."  Jesus said to him, "Rise, take up your mat, and walk."  Immediately the man became well, took up his mat, and walked.

Now that day was the Sabbath.  So the Jews said to the man who was cured, "It is the Sabbath, and it is not lawful for you to carry your mat."  He answered them, "The man who made me well told me, 'Take up your mat and walk.'"  They asked him, "Who is the man who told you, 'Take it up and walk'?"  The man who was healed did not know who it was, for Jesus had slipped away, since there was a crowd there.  After this Jesus found him in the temple area and said to him, "Look, you are well; do not sin any more, so that nothing worse may happen to you."  The man went and told the Jews that Jesus was the one who had made him well.  (John 5:1-15).

And there people brought to him a paralytic lying on a stretcher. When Jesus saw their faith, he said to the paralytic, "Courage, child, your sins are forgiven."  At that, some of the scribes said to themselves, "This man is blaspheming."  Jesus knew what they were thinking, and said, "Why do you harbor evil thoughts?  Which is easier, to say, 'Your sins are forgiven,' or to say, 'Rise and walk'?  But that you may know that the Son of Man has authority on earth to forgive sins" - he then said to the paralytic, "Rise, pick up your stretcher, and go home."  He rose and went home (Matthew 9:2-8).  Notice that Our Lord healed both physically and spiritually, i.e., holistic healing.  Probably some of the demon possessions were really psychotic mental illnesses.  Thus our Lord healed physical disease and handicaps, mental illness, and spiritual sickness.
Communicate love to patients.  Our Lord did not see the sick and handicapped as numbers, but persons of great dignity, created according to the image and likeness of God. He demonstrated compassion and love, exemplifying charity to us.  Thus the Church does more charitable work than any organization in the world in every diocese, through many religious orders, and in the missions…….hospitals, clinics, social work, orphanages, schools, counseling, etc. 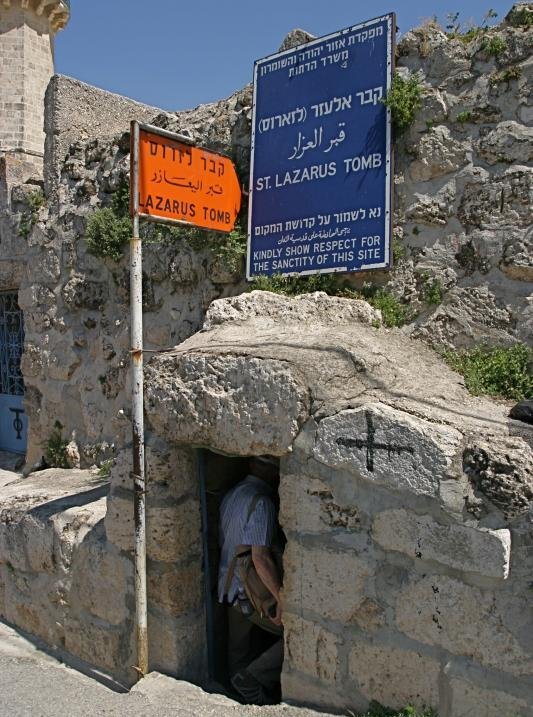 Now a man was ill, Lazarus from Bethany, the village of Mary and her sister Martha.   Mary was the one who had anointed the Lord with perfumed oil and dried his feet with her hair; it was her brother Lazarus who was ill.  So the sisters sent word to him, saying, "Master, the one you love is ill."  When Jesus heard this he said, "This illness is not to end in death, but is for the glory of God, that the Son of God may be glorified through it."  Now Jesus loved Martha and her sister and Lazarus.  So when he heard that he was ill, he remained for two days in the place where he was.

Then after this he said to his disciples, "Let us go back to Judea."  He said this, and then told them, "Our friend Lazarus is asleep, but I am going to awaken him."  So the disciples said to him, "Master, if he is asleep, he will be saved."  But Jesus was talking about his death, while they thought that he meant ordinary sleep.  So then Jesus said to them clearly, "Lazarus has died.  And I am glad for you that I was not there, that you may believe. Let us go to him."  So Thomas, called Didymus, said to his fellow disciples, "Let us also go to die with him."
When Jesus arrived, he found that Lazarus had already been in the tomb for four days.  Now Bethany was near Jerusalem, only about two miles away.  And many of the Jews had come to Martha and Mary to comfort them about their brother.  When Martha heard that Jesus was coming, she went to meet him; but Mary sat at home.  Martha said to Jesus, "Lord, if you had been here, my brother would not have died.  (But) even now I know that whatever you ask of God, God will give you."  Jesus said to her, "Your brother will rise."  Martha said to him, "I know he will rise, in the resurrection on the last day."
Jesus told her, "I am the resurrection and the life; whoever believes in me, even if he dies, will live, and everyone who lives and believes in me will never die. Do you believe this?"  She said to him, "Yes, Lord. I have come to believe that you are the Messiah, the Son of God, the one who is coming into the world."  When she had said this, she went and called her sister Mary secretly, saying, "The teacher is here and is asking for you."
As soon as she heard this, she rose quickly and went to him.  For Jesus had not yet come into the village, but was still where Martha had met him.  So when the Jews who were with her in the house comforting her saw Mary get up quickly and go out, they followed her, presuming that she was going to the tomb to weep there.  When Mary came to where Jesus was and saw him, she fell at his feet and said to him, "Lord, if you had been here, my brother would not have died."  When Jesus saw her weeping and the Jews who had come with her weeping, he became perturbed and deeply troubled, and said, "Where have you laid him?" They said to him, "Sir, come and see."  And Jesus wept.  So the Jews said, "See how he loved him."  But some of them said, "Could not the one who opened the eyes of the blind man have done something so that this man would not have died?"
So Jesus, perturbed again, came to the tomb. It was a cave, and a stone lay across it.  Jesus said, "Take away the stone." Martha, the dead man's sister, said to him, "Lord, by now there will be a stench; he has been dead for four days."  Jesus said to her, "Did I not tell you that if you believe you will see the glory of God?"  So they took away the stone. And Jesus raised his eyes and said, "Father, I thank you for hearing me.  I know that you always hear me; but because of the crowd here I have said this, that they may believe that you sent me."  And when he had said this, he cried out in a loud voice, "Lazarus, come out!"  The dead man came out, tied hand and foot with burial bands, and his face was wrapped in a cloth. So Jesus said to them, "Untie him and let him go."  Now many of the Jews who had come to Mary and seen what he had done began to believe in him (John 11:1-45).

Doctors, nurses, medical technicians, and health workers:  follow in the footsteps of the Great Healer with caring compassion and love.  Say a quick silent prayer before every surgery, procedure, and examination, while looking at yourself as the Lord’s instrument.  Pray with your patients if they allow you.  You can briefly whisper in their ears the concept of redemptive suffering, i.e., offering it all up to God as a dynamic prayer for whatever intentions.  That kind of prayer is very powerful.  If they are not receptive, back off; don’t impose yourself.  Some doctors believe that there is a spiritual component in healing.  Most admit that patients who spiritualize their suffering do better.
Posted by Paul Sebastian at 11:56 PM