The twin towers of the World Trade Center are hit by two commercial airplanes hijacked in mid air by terrorists who used the planes as missiles to destroy the buildings, the people inside, the passengers, and the terrorists themselves on a suicide mission to protest the perceived oppression of Arabs by Israel.  Exactly 2977 lives were lost in the four terrorist attacks (2,753 in the World Trade Center and the surrounding area, 184 at the Pentagon, & 40 in Shanksville, PA) plus the 19 hijackers.  The survivors continue to die from Cancer because of the toxic gases they breathed.  The number would have been greater were it not for the heroism of the New York Fire Department (343 gave their lives) and the Police.  Americans were afraid and people returned to the churches for a time and then drifted away again.  Pray for peace!

Throughout the history of salvation from Biblical times to today people have a tendency to sin (concupiscence) and drift away from God.  This may be in the form of indifference to the faith, Church teaching, and morality.

God does not have to punish mankind.  The natural consequences of sin (greed, immorality, selfishness, injustice, etc.) are exploitation, oppression, slavery, wars, captivity, and other forms of human tragedy as the terrorism of September 11, 2001.  Filled with fear, people did come back to God after that catastrophe.  The churches were packed for a while, but again we see ourselves drifting away.

A cyclic pattern repeated itself time and time again in the Old Testament.  When the Jews were faithful to God and His Covenant with them, they were powerful and prosperous as under King David and much of the reign of King Solomon.  However, with prosperity and power, the Jews began to drift as though they no longer needed God.  They would fall into corruption, immorality, taking pagan wives, worshiping false gods, etc.

Since the Jews ignored the warnings by the prophets, the Lord let them learn the hard way by the consequences of their sins.  We can recall the conquests by the Assyrians, the Babylonians, Persians, Greeks, and Romans.  May we learn from the mistakes of the Jews of the Old Testament and be faithful to God.

Later Babylon conquered Judea and forced the people into exile as slaves in Babylon known as  the Babylonian Captivity from 597-538 BC, a total of 59 years until King Cyrus of Persia freed them.  The Maccabean Revolt (160-167 BC) returned the land to Jewish control.  Forced to suffer under foreign oppressors, the Jews came back to God until they again fell into sin and national ruin. 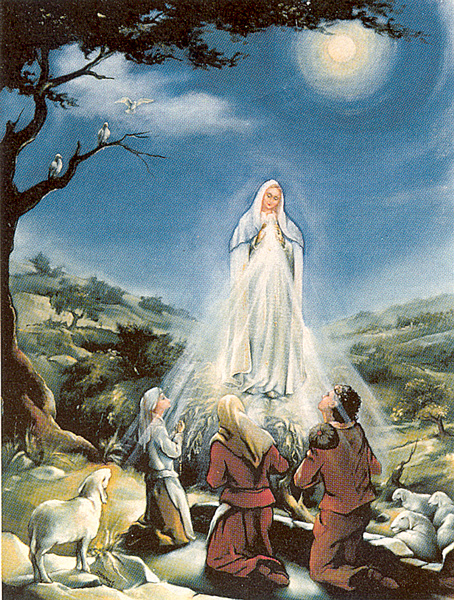 An appearance of Mary at Fatima, Portugal to the three shepherd children:  Jacinta, Lucia, and Francisco.  They transmitted to the world Mary’s Fatima Message.  See Blogs #186 - #195.

During her appearances in Fatima, Portugal in 1917 Mary warned us of a second world war much worse than the first heralded by the Fatima Storm of January 25, 1938 (http://paulrsebastianphd.blogspot.com/2018/01/201-fatima-storm-great-unknown-light-of.html).  Clearly, Mary is doing what the prophets of old did in speaking for God and warning the people.  She is truly a prophet for our times through her many apparitions and messages.

Furthermore, Mary said at Fatima that the errors of Russia would cause great suffering if the world refused to repent.  Noteworthy is the fact that she made this warning before the October 17 Communist Revolution in Russia.  If people follow the Fatima Message, Russia would be converted and there would be a period of peace.  Yes, Communism unexpectedly and miraculously collapsed in Europe (1989-91), but Russia continued in its errors for the next 30 years because national conversion did not take place.

Many of the same Soviet methods of controlling the people under a dictatorial regime and the renamed KGB continue even though there is relative religious freedom.  The press is largely controlled by the government.  Any criticism of the government and its corruption or the war in Ukraine risks a jail term.  A number of dissidents have disappeared or or mysterious died.  The most prominent is Alexei Navalny who recovered from a poisoning in Germany.  Upon his return to Russia, he was tried and confined to a prison far from Moscow.

Thus Russia is again threatening world peace by its invasion of Ukraine since February 24 to restore the former empire of the Soviet Union. The tremendous cost.....about 5 million of Ukraine's 6.6 million refugees fled the country, numerous cities leveled by shelling, over 10,000 Ukrainian soldiers and at least 6,000 civilians dead, along with some 40,000 Russian soldiers killed and their depleted arsenal of weapons.

Western nations, particularly the United States are helping Ukraine (over $15 billion in aid) with weapons and intelligence.  Furthermore, the world's supply of food, oil, and gas is greatly diminished and prices are much higher for what is available.  As a result of all of this, East-West tensions are rising dangerously. 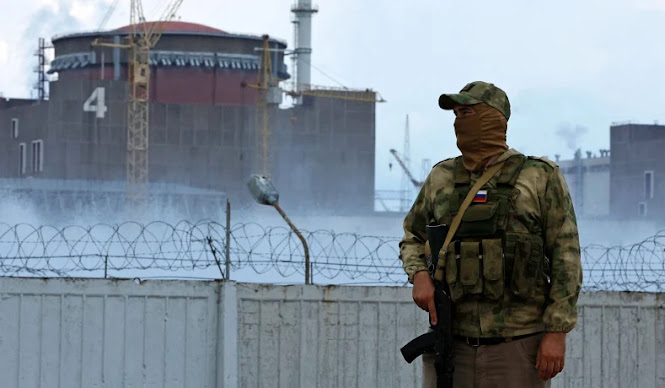 A Russian soldier guarding the Zaporizhzhia Nuclear Power Plant, the largest in Europe.  This is the 4th of its six nuclear reactors.  Russia is using the power plant as a shield to shell the Ukrainian soldiers who are retaliating in kind.   Russia controls the plant and forces the Ukrainian workers and engineers to operate the plant.

The shelling of Europe’s largest nuclear power plant in Zaporizhzhia, Ukraine puts the surrounding countries in grave danger from radioactive fallout if the nuclear reactor core should be seriously damaged.  This would be much worse than the massive radioactive leak in the 1986 Chernobyl, Ukraine nuclear disaster.

Already an unholy alliance is forming among current or soon to be rogue nuclear powers, namely Russia, China, Iran, and North Korea.  China is threatening a copycat invasion of Taiwan; Iran would like to destroy Israel; and North Korea is a threat to conquer South Korea.  If Russian would use nuclear weapons in Ukraine as it threatened to do or attack a NATO member such as one of the Baltic states, formerly captive nations of the former Soviet Union, a disastrous World War III would probably result with unimaginable suffering in the world.  In fact, some experts warn of the very real and gravely dangerous possibility that if Russia can't win, they would use nuclear weapons rather than accept defeat.  It would not take much to set off World War III now or later when Russia replenishes its manpower, weapons, ammunition, and supplies!

Let us return to God and repent.  PRAY, PRAY, PRAY for peace, particularly the Rosary every day!  Let us offer our daily crosses for the conversion of sinners including ourselves.  That is in essence the Fatima Message and the road to peace.