(257) The Sacred and Eucharistic Heart of Jesus Triumphs on the Streets of Budapest, Hungary 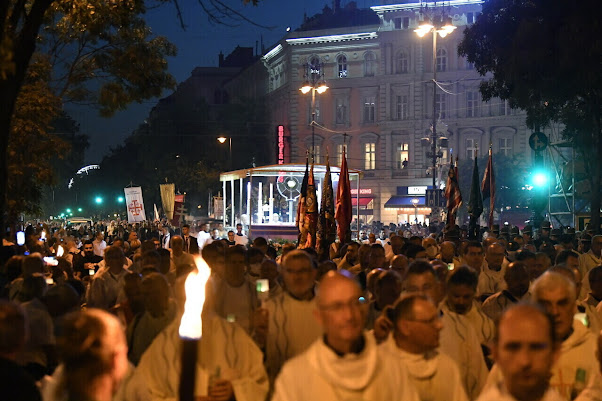 All this week September 5-12 Budapest, Hungary is hosting the 52nd International Eucharistic Congress, a religious gathering held for the purpose of increasing faith in the Blessed Sacrament and promoting Eucharistic devotion. This follows the tradition of Catholic Hungary founded by their first king, St. Stephen (975-1038), who introduced Christianity to the people.  In appreciation Pope Sylvester donated a crown to St. Stephen which is displayed in the national museum in Budapest.
Today according to Eurobarometer 2019 75% of  of the population of 9.8 million Hungarians claim to be Christian and 62% Catholic including the Byzantine Rite (3%).  For a history of the Catholic Church in Hungary see  https://en.wikipedia.org/wiki/Catholic_Church_in_Hungary. 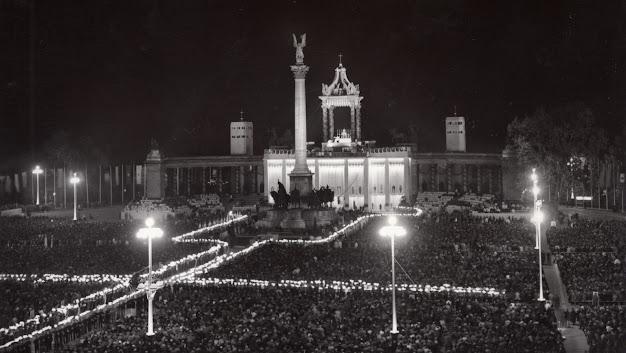 This is not the first time that Hungary hosted such an important event.  It was the 34th International Eucharistic Congress May 25-29, 1938 (a week after I was born), and a little over a year before the official start of World War II when Germany invaded Poland September 1, 1939.  Half a million pilgrims attended from all over the world.  However, the Nazi government of Germany forbade its citizens from attending.  The flag of Hungary was red, white, and green with the crown of St. Stephen in the center.  See https://hungarytoday.hu/budapest-first-international-eucharistic-congress-pictures-fortepan/ and the video https://hungarytoday.hu/budapest-first-international-eucharistic-congress-pictures-fortepan/. 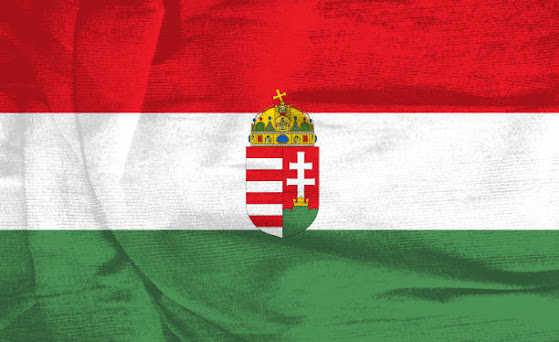 Then Hungary had to suffer the ravages of World War II.  Caught between two tyrannical totalitarian regimes…….Germany to the west and the Soviet Union to the east, Hungary chose as an ally perceived to be the lesser of the two evils……Germany.  Previously, Hungary had to live under Communism for six months in 1919.  Before long Germany occupied Hungary.  Towards the end of the war the Soviet Union occupied the country.  Tyrannical boots marched up and down the streets of Budapest.  Who would have dreamed of another Eucharistic Congress in Budapest?

Once the war ended, the Soviet Union under Joseph Stalin, taking advantage of the Yalta and Potsdam agreements, set up puppet regimes in Hungary and imposed Communism upon the people while the West did nothing to prevent it.  Churches were closed; apostolic and charitable work of the Church was forbidden.  Priests were tortured and jailed, including the primate of Hungary, József Cardinal Mindszenty (1892-1975).  Basic freedoms of religion, assembly, and the press were crushed.  The Hungarian flag with the crown of St. Stephen was replaced by the hammer and cycle.  Who would have dreamed of another Eucharistic Congress in Budapest?

In 1956 the people revolted under Imre Nagy.  They destroyed Communist tanks with home-made Molotov Cocktails made of gasoline.  The flag of Hungary now consisted of a hole in the center formerly occupied by the hammer and cycle.  Cardinal Mindszenty was freed.  These patriots were winning and controlled the country.  Fearing the defeat of Communism, the Soviet Union under Nikita Khrushchev sent in troops to crush the rebellion.  Soviet tanks patrolled the streets, killing and destroying.  Freedom fighters either fled by the thousands or were executed.  Who would have dreamed of another Eucharistic Congress in Budapest?  In the 1970s and 1980s the Communist regime mellowed somewhat, but the people were still not free and the Cold War continued.

Finally in 1989 Communism in Europe collapsed because socialism over the long run is untenable.  Central planning and government ownership of the means of production were very inefficient.  Shortages of basic commodities were common.  There was little or no incentive to innovate and increase productivity.  The economy was stagnant and inflationary.  The people needed and yearned for basic freedoms.  Then democracy was restored and business had the freedom to prosper, benefiting both capital and labor.  The Church had freedom to evangelize and serve the people with diverse charities.  No longer does the Hungarian flag have the hammer and cycle in the center. 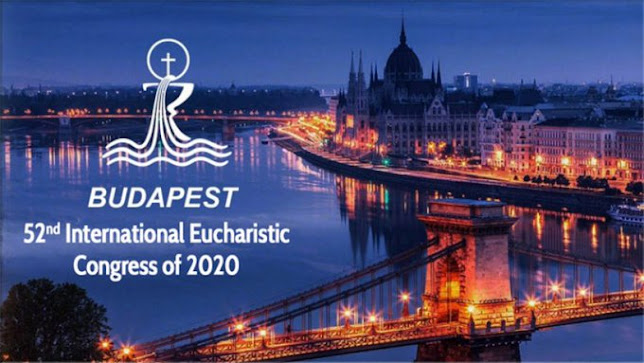 An Immense Procession Through the Streets of Budapest. This week Hungary has the freedom to host the 52nd International Eucharistic Congress. The Eucharist is the source for the life and mission of Christians”, Cardinal Péter Erdó, Archbishop of Esztergom-Budapest, said at the opening Mass.  Each day consists of Holy Mass, prayer, catechesis, workshops, exhibits, testimonies, and adoration.  Even the President of Hungary, János Áder gave a testimony! 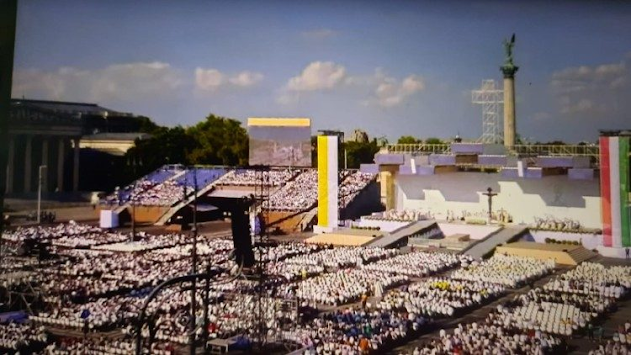 The climax was a Eucharistic procession of some 100,000 prayerful people extending over several blocks……young and old, men, women, and children followed by a truck carrying a platform holding an altar with a large monstrance……..the Blessed Sacrament…….the Eucharist, the body of Christ, soul and divinity, His true presence, manifesting His infinite love towards each one of us. 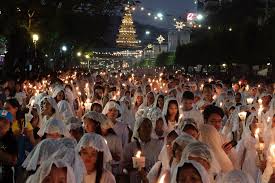 The huge Heroes Square was once the scene of Communist demonstrations, military parades, and propaganda shows.  Now it is the venue of an outdoor Mass with a huge platform that served as the altar.  The boots of the Gestapo marched on these streets, seizing Jews from their apartments and sending them to the gas chambers.  Later the boots of Communist soldiers trod the streets.  During the 1956 Hungarian Revolution Soviet tanks patrolled the boulevards, destroyed numerous buildings, and fired on the people as blood flowed onto the streets.  Who would have dreamed of a Eucharistic procession on these same streets?

Today September 11, 2021 the Blessed Sacrament, the Body of Christ, of whom the people are a part, is processing on the very same streets that have such a bloody history.  This is the triumph of the cross which was part of the procession.  THIS IS THE TRIUMPH OF THE EUCHARISTIC HEART OF JESUS that always comes sooner or later even when the current outlook seems to be so dark!  God is always in control.

Presidents, kings, and dictators come and go through the millenniums.  Empires rise and fall.  Nazism and European Communism that once threatened all of mankind are now on the ash heaps of history.  Throughout history forces of evil have tried to stamp out Christianity --from pagan Rome to atheistic Communism and radical Islam-- but the Church has always prevailed.  Through all of this there is one constant.  The truth of the Eucharist endures and continues to thrive.  How true the theme of the Congress is: “In You (Eucharistic Jesus) is the source of all our blessings” (Cfr.: Ps 87, 7).

Today there is another enemy perhaps more sinister than ever……secularism that takes God out of social discourse and public life, ignoring traditional morality and Church teaching for the false gods of pleasure, personal convenience, money, power, prestige, and the materialistic accumulation of wealth and things while restricting religion to the four walls of the church as though God did not exist. This mentality has caused a marked drift of people away from the Church.

Let us pray today on this 20th anniversary of 9/11 (2001) that the Eucharistic Heart of Jesus will also triumph with a Eucharistic Revival that will bring those who have drifted away back to the Church as faithful Catholics.  Lord, please do not permit another 9/11 that brings people back to the Church only for the duration of the terrorism crisis.