(248) Knights of Columbus Mobilizing Men to Step Into the Breach in the Spiritual Battle Raging in the U.S. and the World 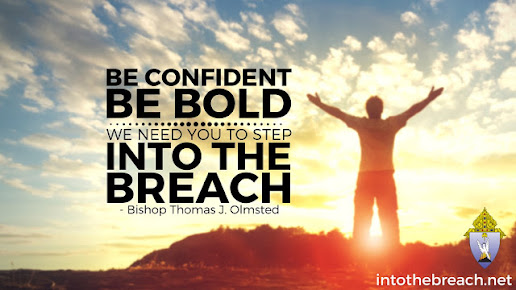 Note: Although this article is addressed to men, most of it is applicable to women as well.

Our country and the world is in moral decline.  While America has been besieged by the COVID-19 Pandemic since March that has led to large scale unemployment, many other intractable problems persist……racial strife, violent riots, extensive crime and corruption, political scandal, widespread drug and alcohol addiction, spiritually dysfunctional and broken families, a flood of pornography, immodest dress, sexual immorality and promiscuity, cohabitation becoming part of the culture, commonly accepted contraception, abortion on demand at any stage of fetal development, assaults on the sanctity of marriage, a misguided gender ideology, diminishing confidence in the press and our voting system, restrictions on religious freedom of conscience and a certain intolerance of Christian belief in our secular society, business social irresponsibility, many pockets of poverty and homelessness, out of control government debt that will eventually cause runaway inflation, etc.

A trend toward socialism that was moving along in the previous administration is expected to accelerate in the coming administration.  Simply look at the backgrounds of the new appointees.  At the same time secularism with its so called political correctness is overcoming the United States and Europe.  Coupled with the often chaotic and violent events over the past several months, one is lead to believe that our badly divided and polarized country has been entering into a dark period in our history.  Men of faith (and women too) must step up and do their part to right the ship.  There is only so much a president can do.

People are drifting away from the Church, which is still recovering from the great damage done by clerical sexual abuse.  Laxity pervades the Church.  Sunday Mass attendance, a grave obligation, has decreased greatly.  By far the largest religious affiliation are the “Nones” (no religious affiliation), many of whom are fallen away Catholics). Sin has been deemphasized; most Catholics have not been to confession since their first confession as children........as though nobody sins anymore.  At one time almost every practicing Catholic went to Confession at least for Christmas and Easter.  We are losing our youth.  People are blatantly ignoring much of Church teaching, including many of our national leaders who claim to be practicing Catholics, but fragrantly promote measures in direct opposition to its fundamental principles.  Cafeteria Catholicism (picking and choosing what to believe and accept while rejecting or ignoring essential truths not to one’s liking) is penetrating the Church into the parish, down to the man and woman in the pew.   It’s all part of a cultural and spiritual war that has been raging since the turn of the 21st Century and before..

In 2015 Bishop Thomas Olmsted, Bishop of Phoenix, confronted this situation with his landmark apostolic exhortation, calling for the restoration of masculine virtues and exhorting men to step into the breach in the battle for the heart and soul of America…….."Be Confident; be bold.  We need you to step into the breach”.  As soldiers of Christ, read this stirring internationally known document in its entirety.  Go to (106) INTO THE BREACH: An Apostolic Exhortation to Catholic Men

The Knights of Columbus followed that with its “Into the Breach Study Guide”.  Go to

In 2019 or so the Knights of Columbus (KofC) went further with a full fledged national campaign.  Inspired by the Apostolic Exhortation for Catholic men written by Bishop Olmsted, the Knights of Columbus produced its Into the Breach Video Series which seeks to answer the question of what it means to be a man and how to live as a man in today's world.  It is very interesting, convincing, and well done.  According to the KofC website (www.kofc.org), “Into the Breach is a call to battle for Catholic men which urges them to embrace wholeheartedly masculine virtues in a world in crisis”.

This campaign aims to penetrate into the local parish through the nearest Knights of Columbus council, which is asked to show and discuss the video series.  Each of the 12 episodes is about 12 minutes long, very much suited for a council meeting plus some discussion.  The series includes: 1) Masculinity; 2) Brotherhood; 3) Leadership; 4) Fatherhood; 5) Family; 6) Life; 7) Prayer; 8) Suffering; 9) Sacramental Life; 10) Spiritual Warfare; 11) Evangelization; and 12) The Cornerstone.  Go to https://www.kofc.org/en/campaigns/into-the-breach.html

Men, not necessarily knights, are asked to download and read the “Into the Breach Video Series Study Guide”.   A giant step forward would be to organize and lead a small discussion or study group.  It also can be simply used for personal reflection.  Go to

May each one of us equip and develop ourselves in every way such as through the sacraments, prayer, by spiritual reading, and viewing such videos as mentioned above.  Then we will be equipped to join the battle and step into the breach in the line that is being penetrated and assaulted by the forces of evil.  Do your part in at least little ways, beginning with your family and extending into the work place and the community.  Do your part for cooperation, civility, and healing of a divided nation.  Put into practice Christian principles, all of which are based upon the Gospel.

There’s a huge job to be done in evangelization, both within and outside the Church.  Each person can do something by prayer, example, witness, word, and deed.

Be alert for opportunities and pray to the Holy Spirit daily for guidance on what to do, what to say, and what to write.  For example, my brother knight Jay Stapleton, a member of my parish and owner of a small business, thought that he could make a difference by running for public office.  Now he’s a Gallia County, Ohio commissioner.    Let’s pray for his success.

If handicapped, suffering from a chronic illness, aged, or even bedridden, you can still join the battle and step into the breach.  That is through prayer and offering your crosses, your aches and pains to the Lord for the conversion of sinners, as advocated by Our Lady of Fatima, thus giving invaluable support to the men on the front lines.  Furthermore, a handicapped person can do clerical jobs in the council or make phone calls to increase the membership rolls and meeting attendance.

Your little bits done every day count and over a life time can add up to greatness.  Do it all for the glory of God. You and men like you can make your family a true domestic church; you can be a force for good in your parish, your workplace, and your community; and ultimately change the world for Christ.  With the Lord’s help you can make a difference, a big difference.

Posted by Paul Sebastian at 4:57 PM