This article hit the front page of the Galipolis Daily Tribune on November 8,, 2019.  The on-line edition also featured the article as "Reflecting on Vietnam 50 Years Later" at
https://www.mydailytribune.com/news/46608/reflecting-on-vietnam-50-years-later.

John Stapleton is one of the 2.64 million Vietnam veterans (9.7% of their generation) who made it home after their Vietnam experience.  However, 58,479 American soldiers were brought home in coffins.......imagine a sellout crowd at a major college stadium giving their all for our country.  Less than 800,000 remain, all over the age of 60,  They did not want to go to Vietnam; our country sent them there and they obeyed.  To them all we owe an eternal debt of gratitude.

John Stapleton of Crown City in the foothills of Appalachia in southeastern Ohio, like many of his former comrades in arms, still suffers from PTSD and other wounds, such as from Agent Orange 50 years after fighting for our country.  They didn’t know what PTSD was then.  When a fire cracker goes off or a car backfires, his instinct is to dive for cover.

He still feels very uncomfortable in crowds and wakes up at night from the slightest noise.  John Stapleton often relives the experience in flashbacks and his mind is never quite right.  According to Bill Mangus, the commander of the local VFW, "it’s very common for a Vietnam veteran to sit in a restaurant with his back against the wall to have a clear view of the entire room in case of trouble".

Today, although officially disabled, John Stapleton started up his own business, restoring and selling salvage cars.  He’s a great mechanic and gardener.  John and his wife Karen have nine adult children and numerous grandchildren.

A Job to Do.  As an Army Sp 5 in 1969, this 21 year old young man was responsible for repairing surveillance OV-1 Mohawk aircraft, equipped with infrared cameras, on an airfield cleared in the jungle and keeping them in the air.  The runway was constructed of steel planks and the base was operated by some 200 men.  The base, some 10 miles from Battalion Headquarters, consisted of a tower, bunkers, barracks, etc.  He would have to take his turn at perimeter guard duty because their small airfield and repair center was a prime target for an ambush.


In fact the base often had to withstand mortar fire.  One mortar attack killed a number of his buddies and destroyed 10 helicopters.  Stapleton once had to wade through a marsh full of cancer causing agent orange, the herbicide to defoliate the jungle.  At times this soldier had CQ duty in which he was a courier, hand carrying messages in a truck to the commanders in the jungle while exposed to possible ambushes and mines along the way.  Sometimes hand written messages by courier were the only secure means of communication.

It was a dirty and difficult war as Mr. Stapleton related.  They didn’t know who the enemy was.  “Sometimes during the day Viet Cong would work for the Americans.  At night they would become the enemy.  In one case a trusted Vietnamese barber slit the throats of two soldiers on the chair.  In another case they discovered a woman with numerous hand grenades under her blouse.  Small kids would carry a hand grenade with the pin pulled and only the lever remaining.  Then he would simply drop the hand grenade and run”.  Imagine the stress that every combat soldier had to go through.  War is hell!  No wonder that a few American soldiers were accused of committing an atrocity.

Like thousands of other soldiers who survived combat conditions, John Stapleton brought Vietnam back home in his head.  He can never really get away from the jungles of Vietnam.  In 1995 about 26 years after his Vietnam experience, John Stapleton wrote the following poem.

As we fly above the bomb scarred land,
the pilot says: “Welcome to Vietnam.”
As they open the gates to hell,
we hear the sounds that we’ll know so well.
As we ride on the bus to Long Bihn,
I wonder: “Will I ever see home again!”

As the mortars explode and sirens wail,
it’s just another night in hell.
As the cobras do their mighty dance,
the mini guns blaze a shower in the sky;
the rockets fly and more gooks die;
machine guns fire and mortars too.
Thirteen GIs are dead when it’s through,
many more crippled and maimed;
their lives will never be the same.

This is not a war, so I’ve been told.
I’ll tell you that line is getting old.
They stole my mind; they stole my soul.
I wonder: “Will I ever again be whole?”
I finally made it through a year; and then
as the plane takes us back to Long Bihn,
they are shelling us again and again!
God, let me make it to another day,
cause tomorrow I’ll be on my way
to the land we call the USA.

As we land on American soil,
I thought I’d never see that place again.
But after all these years, to my dismay,
I see it every night and day.
The battles on and on they rage;
my young soul will forever walk that land
until God calls me home again
from that hell called Vietnam! 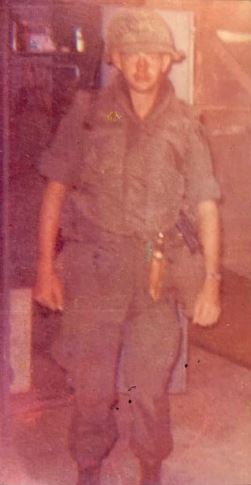 Thank you, John Stapleton and thousands of other old soldiers who sacrificed themselves for our country and continue to do so 50 years later until the day they die.

https://en.wikipedia.org/wiki/Vietnam_War - A short history of the Vietnam War.

https://www.youtube.com/watch?v=v77z_ZZDUKc  – Hearts and Mines……..a more detailed documentary of the war.

https://www.usna63.org/tradition/history/SoberingVietnamVets.pdf - 2016 Statistics on the Vietnam Veterans.

Veterans by the numbers.
Posted by Paul Sebastian at 9:05 AM