Looking up at the Mt. of Olives (also called Mt. Olivet) from the Kidron Valley.  Christ took his apostles to the top where He ascended into Heaven.  At the foot is the Church of All Nations which is built on the site of the Agony of Christ in the Garden of Gethsemane.  The Russian Orthodox Church of Mary Magdalene with the golden steeples is a little higher on the right.  The Church of Dominus Flevit, where Christ wept over Jerusalem, is also on this slope.  For a video tour click on https://video.search.yahoo.com/yhs/search?fr=yhs-pty-pty_converter&hsimp=yhs-pty_converter&hspart=pty&p=mt.+of+olives#id=5&vid=0df5bdc8dcf255a702de449792330f09&action=view and also https://video.search.yahoo.com/yhs/search?fr=yhs-pty-pty_converter&hsimp=yhs-pty_converter&hspart=pty&p=mt.+of+olives#id=60&vid=1ed05005a0725932196aa54f13433f4e&action=view.


After Easter. He (Jesus) presented himself alive to them by many proofs after he had suffered, appearing to them during forty days and speaking about the kingdom of God.  While meeting with them, he enjoined them not to depart from Jerusalem, but to wait for "the promise of the Father about which you have heard me speak; for John baptized with water, but in a few days you will be baptized with the Holy Spirit."  “But you will receive power when the Holy Spirit comes upon you, and you will be my witnesses in Jerusalem, throughout Judea and Samaria, and to the ends of the earth" (Acts 1:3-5,8).  “You are witnesses of these things.  And (behold) I am sending the promise of my Father upon you; but stay in the city until you are clothed with power from on high" (Luke 24:48-49).

Inside the chapel/shrine are two footprints said to be those of Christ.


After the Ascension of Christ into Heaven, the apostles, Mary, and other disciples followed the command of their master and waited for the Holy Spirit in the Cenacle, also known as the Upper Room, the same place as the Last Supper and the appearance of Christ after the Resurrection.  They waited in prayer for the next ten days, really a beautiful retreat, preparing themselves spiritually, preparing their hearts for the descent of the Holy Spirit, the third person of the Holy Trinity.  May our Confirmation students also prepare themselves spiritually for that great sacrament.

The Descent of the Holy Spirit. Chapter 2 of the Acts of the Apostles beautifully describes this momentous event:  When the time for Pentecost (50 days after Easter) was fulfilled, they were all in one place together.  And suddenly there came from the sky a noise like a strong driving wind, and it filled the entire house in which they were.  Then there appeared to them tongues as of fire, which parted and came to rest on each one of them.  And they were all filled with the Holy Spirit and began to speak in different tongues, as the Spirit enabled them to proclaim (Acts 2:1-4).

Now there were devout Jews from every nation under heaven staying in Jerusalem.  At this sound, they gathered in a large crowd, but they were confused because each one heard them speaking in his own language.  They were astounded, and in amazement they asked, "Are not all these people who are speaking Galileans?  Then how does each of us hear them in his own native language?  We are Parthians, Medes, and Elamites, inhabitants of Mesopotamia, Judea and Cappadocia, Pontus and Asia, Phrygia and Pamphylia, Egypt and the districts of Libya near Cyrene, as well as travelers from Rome, both Jews and converts to Judaism, Cretans and Arabs, yet we hear them speaking in our own tongues of the mighty acts of God."  They were all astounded and bewildered, and said to one another, "What does this mean?" (Acts 2:5-13).

No longer afraid, the apostles were on fire for the Lord.  May the Holy Spirit set us on fire!  The apostles were so convinced of the truth that they fearlessly spread the word even at the risk of torture and death.  Indeed all the apostles except St. John were martyred for the faith.

“Then Peter stood up with the Eleven, raised his voice, and proclaimed to them, 'You who are Jews, indeed all of you staying in Jerusalem. Let this be known to you, and listen to my words.  You who are Israelites, hear these words. Jesus the Nazorean was a man commended to you by God with mighty deeds, wonders, and signs, which God worked through Him in your midst, as you yourselves know.   This man, delivered up by the set plan and foreknowledge of God, you killed, using lawless men to crucify him.  But God raised Him up, releasing Him from the throes of death, because it was impossible for Him to be held by it” (Acts 2:14, 22-24). 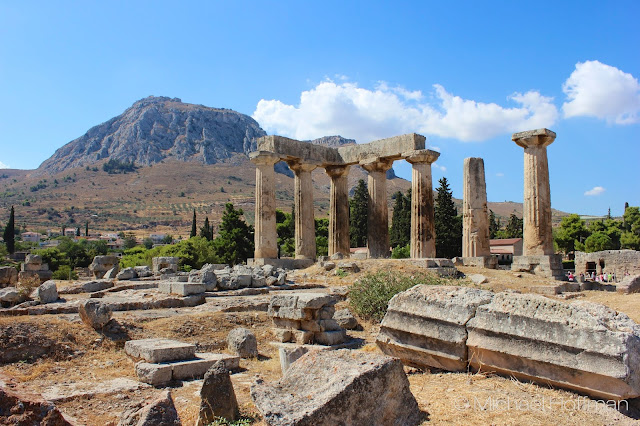 Pentecost is the birthday of the Church.  Only then did the apostles have the courage and the zeal to go out and teach all nations as Christ commanded just before ascending into Heaven.  The above photo shows the ruins of ancient Corinth in Greece which had a reputation of moral decadence.  There St. Paul, filled with the Holy Spirit, had the zeal and courage to spread the faith.  We also are called to evangelize in little or big ways by prayer and example, by word and deed.  May the Holy Spirit also set us on fire, give us His gifts, and renew the graces of the sacrament of Confirmation.  We are called to be witnesses to the faith by our lives in the faith.   DON’T JUST KEEP THE FAITH; SPREAD IT.

Posted by Paul Sebastian at 9:40 PM