(196) MARINE LT. FR. VINCENT CAPODANNO: the Grunt Padre's Heroism and Holiness on the Battlefield in Vietnam Earned Him the Congressional Medal of Honor---- Beyond the Call of Duty 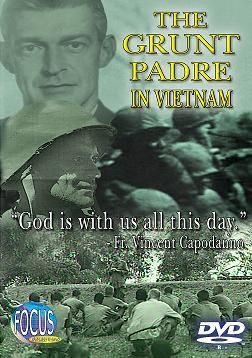 Part of an Italian-American family of 12, Vincent Capodanno’s vocation was developing through high school on Staten Island, NY and Fordham University as well as a regular at daily Mass.  God was persistent in His call and finally, giving the Lord his “fiat” (yes), he joined the Maryknoll Fathers in Maryknoll, NY in 1949 and was ordained in 1958 as a Maryknoll missionary as part of a class of 48.  It was a time of an abundance of vocations in the American Church.  Maryknoll had a minor seminary (high school) at the time and still has a major seminary for both Philosophy and Theology.  Today each ordination class hovers around five.
The newly ordained priest was sent to school to learn Chinese as part of his assignment in Taiwan, an anti-communist island nation off the coast of mainland China.  While doing parish work, teaching native catechists, distributing food and medicine, and directing a youth hostel, Fr. Vincent felt called to something else.

The Vietnam War was raging and his upbringing during World War II (born in 1929) made him very patriotic.  Replying to the great need for Catholic chaplains (today the need is even more urgent), he obtained permission from his superiors to volunteer as a Marine chaplain in 1965.  After finishing the tough Officer Candidates School and being commissioned as a lieutenant in the Navy Chaplain’s Corps during Holy Week of 1966, he was assigned as a chaplain of a Marine battalion.
Fr. Vincent lived the life of the marine grunt in the hot and humid jungle……eating and sleeping under the same conditions.  Wherever his men went, he went and shared their burdens.  He established makeshift libraries for the men and even organized outreach programs for the local villagers.  His Maryknoll training convinced him of the importance of considering the welfare of the people, understanding them and their culture……..Fr. Vincent had the heart of a missionary.


He spent hours counseling and reassuring the weary and disillusioned, consoling the grieving, hearing confessions, instructing converts, and saying Mass with all his heart with such grace, intensity, and love on improvised altars in combat zones.  Reflecting his devotion to the Christ bearer and patron of those on a journey, he distributed St. Christopher medals.  He always had something for the men……cigarettes, candy, a cold soda or a book from his reading library.

According to Fr. Daniel Mode in his well researched book, “The Grunt Padre”, “No problem was too large or too small to take to Father Vincent---- he was available to them day and night."  He was a true father to young boys thrust into the terrifying reality of battle, giving them comfort and guidance.  He shared his salary and rations with anyone in need. When Christmas came around and soldiers felt forgotten, Father Vincent saw to it that no Marine was without gifts which he obtained from friends and organizations.  His granting of General Absolution before battle unburdened the consciences of the Marines and instilled in them the courage to fight.  His mere presence in a unit gave comfort and lifted morale.  His love for the men showed in his devotion to them and in the relevance and simplicity of his homilies on a basic level.

When men died, he was at their side so they would not die alone, giving them the last rites, encouraging them to repent and persevere.  In addition, he wrote countless letters of personal condolence to parents of wounded and dead Marines, also offering solid grounding and hope to those who lost friends.  He comforted wounded, blessed troops, and gave Communion to Catholics, before taking off for another battle zone.  His goal was to visit each unit once a week.  He also attracted Protestants and many attended  his Masses, “giving spiritual succor to all” according to Lt. Frederick Smith.  Cpl. Bill Kuffrey noted: “I am not a Catholic, but this man of God meant more to me than I ever could have imagined.  He inspired me in so many ways, in my times of need.”


According to one account, two men were lost crossing a jungle stream.  Fr. Capodanno took it on himself to find the drowned men and the Lord guided him to them.  He gave the men the last rites and brought them back.

Fr, Vincent would attend intelligence briefings and find out from friends in Intelligence which unit would most likely encounter the heaviest enemy contact and then make it a point to accompany them.  He would simply hop onto the helicopter without even bothering to obtain formal permission.  Refusing to carry a rifle or even a pistol as a priest, a soldier was assigned to protect him against his will.

The grunts welcomed his presence and positive influence as a source of strength.  It sometimes helped to rally the men.  They wanted him out there.  Going from man to man, he prayed with them; assisted with first aid as necessary, encouraged, and blessed the wounded often scared even if minor; giving the last rites to the dying.  At times he would accompany the battalion commander around the perimeter and comfort the men.  He always wanted to be where the action was and was most needed whether a patrol or the battalion.

According to Capt. Richard Alger, Fr. Vincent was a man the men could relate to and depend on.  He even ministered in the Officers Club over a drink or a cigarette.
Fr. Capodanno’s first tour was so fulfilling that he volunteered for another one year tour in June 1967.  Even during his home leave, he longed to be with his men.  He loved them with the zeal of bringing the Lord and His compassion to them. 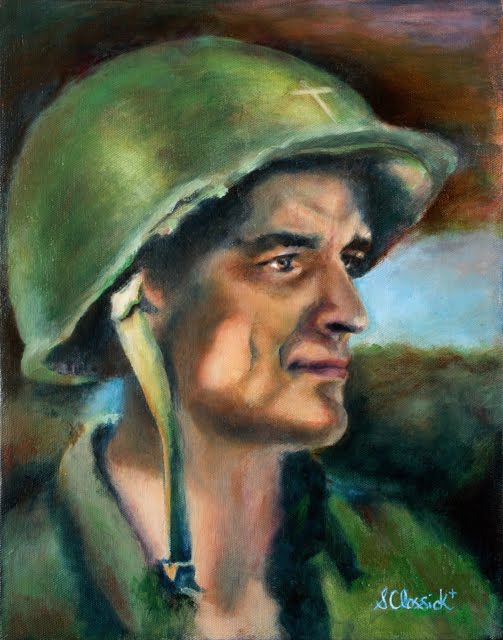 On September 4 fifty years ago he was accompanying the men of the 1st Battalion 5th Marine Regiment on the Operation Swift Offensive in the Queson Valley.  Ambushed by 2500 men of the 2nd NVA Division and outnumbered five to one on Hill 51, Fr. Capodanno was like a ray of hope in the midst of the storm with its yelling and screaming; he went up and down the line encouraging, caring for the wounded, and anointing the dying.  Cpl. Ray Parkins recalled that when he was wounded, Fr. Vincent laid hands on his head and blessed him.
During the fierce fighting, the grunt Padre spotted a wounded corpsman unable to move after being hit by a burst of automatic fire from a machine gun nest. Fr. Capodanno ran to his aid and began to care for his wounds and used his own body to shield him.  He received 27 bullet wounds in his spine, neck, and head.  He emulated Our Lord with his love and by giving his life for his men. 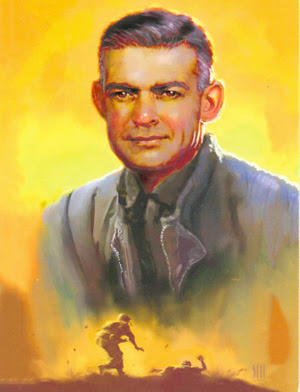 Awe inspiring is an eye witness account (see vincentcapodanno.org) by Lt. Joseph E. Pilon, MD: “Over here [Vietnam] there is a written policy that if you get three Purple Hearts you go home within 48 hours. On Labor Day, our battalion ran into a world of trouble- when Father C. (Capodanno) arrived on the scene; it was 500 Marines against 2500 North Vietnamese Army Regulars. Needless to say, we were constantly on the verge of being completely overrun and the Marines on several occasions had to advance in a retrograde movement. This left the dead and wounded outside the perimeter as the Marines slowly withdrew. Casualties were running high and Father C. had his work cut out for him. Early in the day, he was shot through the right hand which all but shattered his hand.  One corpsman patched him up and tried to med evac him, but Father C declined, saying he had work to do. A few hours later, a mortar landed near him and left his right arm in shreds hanging from his side. Once again, he was patched up and once again he refused evacuation. There he was, moving slowly from wounded to dead to wounded using his left arm to support his right as he gave absolution or Last Rites, when he suddenly spied a corpsman get knocked down by the burst of an automatic weapon. The corpsman was shot in the leg and couldn't move and understandably panicked. Fr. C. ran out to him and positioned himself between the injured boy and the automatic weapon. Suddenly, the weapon opened up again and this time riddled Father C. from the back of his head to the base of his spine- and with his third Purple Heart of the day- Father C. went home.”  A pall of deep sadness descended over the entire regiment. 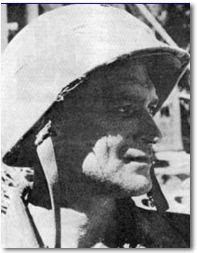 Cpl. Richard L. Kilgore relates: “I was Fr. Capodanno’s aide for a period of time in Vietnam with Henry Hernandez.  I have never met a man in my life time like Fr. Capodanno--- it was like he had an aura around him (others noticed it as well).  I knew during the tough times in Vietnam God was with him.”  He epitomized the Marine motto, “Semper Fidelis” in being faithful to the end.  The men, including a Protestant chaplain called him a saint.  Jerry Bain of Pt. Pleasant, WV confirmed to me that the men loved him and held him in such high esteem.  Lt. Col. Peter Hilgartner, his battalion commander, believed that Fr. Capodanno improved the fighting spirit of the men and called him “the finest, greatest military chaplain I ever met in my career”.

Even the Presbyterian regimental chaplain, Eli Takesian praised him: “Fr. Capodanno had deep, sad, compassionate eyes that ignited people.  He had the courage of a lion and the faith of a martyr.  He lived the Christian life.  He laid down his life for his people and changed a lot of lives.  Fr. Capodanno emulated Christ as much or more than anyone I ever knew”.  It was Rev. Takesian who gave the eulogy at Fr. Capodanno’s funeral.


Posthumously in 1969 Fr. Vincent was awarded the Congressional Medal of Honor in addition to his other medals.  The Navy commissioned a destroyer escort in 1973: the U.S.S. Capodanno in his honor. 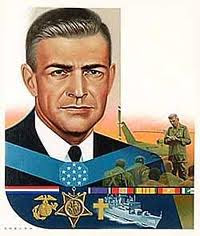 In 2006 he was declared Servant of God or Venerable by the Catholic Church, the first step to canonization.  His death was followed with cures and conversions.  More detail can be found on www.missioncapodanno.org, and www.youtube.com.

For a fascinating history with bibliography of Catholic chaplains in the U.S. military go to http://www.tfp.org/tfp-home/focus-on-history/catholic-army-chaplains-americas-forgotten-heroes.html.  For the official Dept. of Defense Medal of Honor Citations of Fr. Joseph O’Callahan (Blog #164), Fr. Emil Kapaun (#180), Fr. Charles Watters, Fr. Angelo Liteky, and  Catholic chaplains, go to my Blog #127 “Heroic Catholic Chaplains Who Have Been Awarded the Congressional Medal of Honor”.
Posted by Paul Sebastian at 7:19 AM