(194) Poland: the Biggest Rosary Rally Ever?

The United States has its National Day of Prayer on the first Thursday of May in front of almost every county courthouse in the land and some schools and colleges.  Thousands participate.  The American Needs Fatima (www.americaneedsfatima.org) group promotes Rosary rallies all over the country at noon on the Saturday closest the October 13, the anniversary of the final appearance to the three shepherd children and the Miracle of the Sun.  Thousands participate.  This year they expect 21,570 rosary rallies.  In addition there is a National Prayer Rally at the Upper State Park, 200 New Jersey Ave NW in Washington D.C. and also in San Francisco today.

The Feast of Our Lady of the Rosary.  As laudable as those efforts are, they cannot compare in participation with the Rosary Rally that Poland had today, October 7, to commemorate the Feast of the Queen of the Holy Rosary and also Our Lady of Victory, both of which coincide with the anniversary of the decisive Battle of Lepanto (October 7, 1571).  The Rosary Rally also commemorates the centennial of the apparitions of Our Lady of Fatima and her promised Miracle of the Sun (October 13, 1917) along with the 140th anniversary of the apparition of Our Lady of Gietrzwald.  Finally, today is the First Saturday of the Month, which is Mary's Day.  She had asked us to go to Mass, Confession, Holy Communion, and say the Rosary with 15 minutes of meditation on five consecutive first Saturdays.  She promised to assist those at the hour of their deaths.

In 1571 Pope Pius V had organized the victorious Holy League, an alliance of Western European nations, to stop the advance of the radical Islam of Turkey which threatened to conquer all of Europe.  One goal was to take Italy and to convert the Basilica of St. Peter into a mosque.

Realizing that this was also spiritual, a clash of civilizations of Christianity and radical Islam, he mobilized the faithful to pray the Rosary for victory to halt the advance of radical Islam.  Although outnumbered, almost 3 – 1, miraculously, the wind favored the Holy Alliance flotilla under the command of Don Juan of Austria and put the Turkish ships into disarray.  Europe was saved from radical Islam for the next 112 years although Hungary and Slovakia continued to be occupied by the Ottoman Turks (1541-1699). 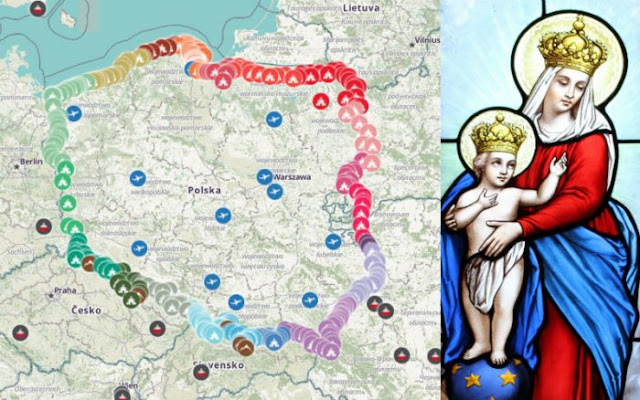 Goals and Prayer Intentions. Organized by Catholic laypeople of the Solo Dios Basta (“God Alone Suffices”) Foundation, the event was sponsored by various state-owned companies.  Radio Maryja (and its TV affiliates) helped in the promotion and the Polish Bishops Conference endorsed the rally.  They called the people to travel to the nearest border in order to pray the Rosary in reparation and for Poland…….for protection from the secular influences of the European Union and for the preservation of its Christian roots, for the people of Poland to remain faithful to the Church, for the solution of its socioeconomic problems, for peace, for Europe and for the world.

Although people did pray for protection against Islamization and terrorism, the Rosary Rally was not anti-Muslim.  It was to celebrate the October 7 feast of Our Lady of the Rosary.  True, Catholics attribute the October 7, 1571 victory that halted the advance of radical Islam in Europe to the mobilization of prayer, particularly the Rosary.  It is also true that Poland refuses to accept refuges, but is willing to help in other ways such as providing safe haven for them in a Muslim country for the purpose of returning them to their original homes and culture when peace is restored instead of permanently uprooting them.  Furthermore, Poland and Hungary had to fight the threat of conquest by radical Islam through much of its history.   Hungary was forced to live under the yoke of radical Islam for 158 years.  The fear is terrorism and the threat to its rather homogeneous culture because Muslims don’t assimilate as most immigrants do.  Western Europe has learned this the hard way.
Priests I talked to in Poland say that the number of vocations is still sufficient to man each parish with two or three priests, sometimes four and to send missionaries to foreign lands.  Sunday Mass attendance is still very good with most churches filled to capacity.  But a significant number of people have fallen away from the faith or have become lax.  But a significant number of people have fallen away from the faith or have become lax.  As in the U.S., they bring up as an excuse the small minority of lax priests who have betrayed  their vocations.  Secularism, rampant in western Europe, is perhaps the greatest threat to Poland in all of its history.

A few thousand demonstrated in the capital demonstrated against the pro-life laws, known as the Black Protest for their black clothes.  They received $270,000 in monetary support from abroad.  Thus there are fears that Poland is slipping and vocations will decrease in the future.  All seem to agree that the Church was strongest under the scourge of Communism, the enemy of freedom.  It was the Church that united the people and kept the culture alive during the 125 years of the Partition (Austria, Prussia, and Russia each took about a third of the country), Nazism, and Communism.


Impressive was an experience we had while visiting relatives in Kielce, Poland in September.......an all night (8 pm – 3:30 am) prayer vigil at the Shrine of Our Lady of Czestochowa two hours away.  Each diocese of Poland has a designated day of the month to promote.  Thus there is an all night prayer vigil at the shrine practically every day of the year.  The parish filled up the bus it chartered.  Close to 500 people crammed the chapel that houses the precious centuries old image of Madonna and Child.  The evening consisted of song, a homily, and prayer which included the Stations of the Cross and all 20 decades of the Rosary.

Poles even go abroad to enrich their faith.  A couple of weeks ago we joined 238 people from the Diocese of Rzeszow in southern Poland for an eight day pilgrimage to the Holy Land.  It was enough people to charter an Israeli jet for the three hour flight to Tel Aviv.  They were all subdivided into four groups, each with its own bus and hotel.  Our group had two priests, who said Mass each day in a different holy place with vestments and sacred vessels provided by the Franciscans, the principle custodians of the holy places.  One of the priests, a professor in the seminary  gave theological depth to the pilgrimage as we followed in the footsteps of the Lord.  On the River Jordan we renewed our baptismal vows and at Cana we renewed our marital vows.  There were a number of other groups from other dioceses as well during the month and there will be more pilgrimages next year.  The fellowship was also beautiful.

The people were asked to register for the Rosary Rally in advance in choosing one of 320 designated churches and 400 prayer zones near their closest border.  The goal was to surround the country with people praying the Rosary for Poland.  Thus the organizers expected over a million people to pray the Rosary at their chosen churches near the border.  My wife’s sister and brother-in-law, the Pozogas of Kielce traveled over three hours south to Zakopane; our friends, the Kaplitas from Rzeszow drove well over an hour to the Slovakian border.  Over its 2000 mile border that encloses an area of 120,726 sq. miles, Poland is bordered by the Baltic Sea and Russia in the North; Lithuania, Belarus, and the Ukraine in the East; Slovakia and the Czech Republic in the South; and Germany in the West.

Clearly the Church continues to thrive in Poland as a beacon of faith for all of secular Europe.  Since 1717, 300 years ago the Polish people chose Mary to be the Queen of Poland with a Canonical Coronation (approval of the Pope).  The tercentennial was designated as a National Jubilee Year.     Just last November the Hierarchy of Poland designated Christ as the King of Poland in the presence of President Andrzej Duda which is tacit approval (http://paulrsebastianphd.blogspot.com/2016/11/182-poland-peru-and-ukraine-consecrate.html).  Perhaps there is considerable truth in the claims of a few mystics who say that Poland is a chosen nation, despite having suffered so much in its history.  Can any nation in the world come up with a Rosary Rally of the same magnitude?   Let us at least try to follow the example of the Polish people.  All of this makes me proud of being Polish by marriage.

http://www.fatima.org/news/newsviews/2017/newsviews0928.asp - a report on the rally in English.
https://churchpop.com/2017/10/07/thousands-form-human-chain-around-poland-pray-rosary-to-save-the-world/ - news report.
http://www.catholicculture.org/news/headlines/index.cfm?storyid=33257 - news report.
http://www.catholicherald.co.uk/commentandblogs/2017/10/09/praying-the-rosary-is-not-controversial-its-our-best-weapon-against-evil/ - why Poland holds on to its sovereignty.