(175) The Immaculate Heart of Mary and the Sacred Heart of Jesus: United as One 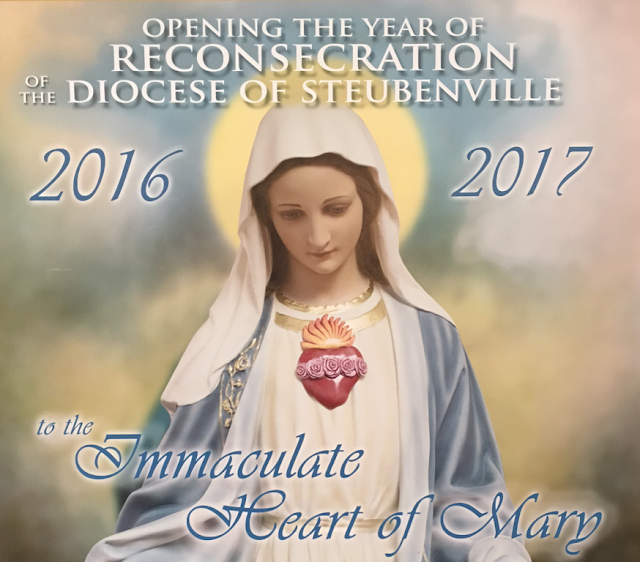 On June 4, Bishop Jeffrey Monforton, opened the Year of Reconsecration of the Diocese of Steubenville to the Immaculate Heart of Mary with a public procession of her statue through the streets of downtown Steubenville..   First the entire diocese prayed a novena in preparation May 26 – June 3.

Her pilgrim statue will visit every parish in the diocese during the next 12 months.  The diocese originally was consecrated to the Immaculate Heart of Mary by the first Bishop of Steubenville, John Mussio, when the diocese was formed in 1945.  The purpose of the reconsecration after 71 years is to renew not only the diocese, but also our parish and each one of us, especially those who are drifting or are lapsed Catholics.  Her intercession will be key to that great missionary task.

Our Own Consecration to Mary.  It is hoped that many of us will consecrate ourselves individually to Mary according to “Total Consecration”, the method written by St. Louis de Monfort, whose statue is at the entrance of our church.  David Stapleton and Jaga Sebastian would be more than happy to guide you in making the consecration to Mary.  This visit of the Pilgrim Statue would be an excellent time to start the 33 day process.

In 1984 St. Pope John Paul II in union with the bishops consecrated Russia in particular and the World to the Immaculate Heart as Mary had requested at Fatima (See Blog #96 at paulrsebastianphd.blogspot.com).
St. Louis Church will receive her statue on Friday August 26 with a special Mass at 6 pm, the day after the feast of St. Louis IX, its patron and coinciding with its Parish Festival the next day.  She will stay with us until Friday September 2.  There will be a procession around the church property in Mary’s honor on Sunday after the special Mass at 10 am.  That will be followed by Adoration of the Blessed Sacrament into the evening and the next morning until the 8 am Mass.  There will also be adoration for an hour before each daily Mass at 7 am and a rosary following it.

The faithful prayed at daily Mass an octave of Preparation for her stay with us since the Feast of the Assumption of Mary (the 4th Glorious Mystery of the Rosary) – her being taken bodily into Heaven upon her death or dormition.  To honor His mother, our Lord would not allow this living tabernacle for nine months to deteriorate or be stained by the elements.  This octave concluded with the feast of the Coronation of Mary as Queen of Heaven and Earth (the 5th Glorious Mystery of the Rosary), which is the octave of the Assumption August 22.  According to the tradition of the Old Testament, it was always the Queen Mother who had the special place of great honor and intercessory influence in the royal court.  Mary of course is the Queen Mother of Christ the King!  Mary has the same intercessory role in the heavenly court for each one of us, her children.  Similarly, mothers at times intercede for their children with an authoritarian father.  MAY WE ALL BE THERE TO WELCOME MARY ON FRIDAY AUGUST 26 at 6 pm and BID HER FAREWELL THE FOLLOWING FRIDAY!

Why do we say “Immaculate Heart of Mary”?   It comes from the doctrine of the Immaculate Conception which was defined by Pope Pius IX in 1854.  That is, Mary was protected from any stain of sin from the very moment of her conception.  Every other person that God created is born with what we call Original Sin, a blot upon every member of the human family as a consequence of the sin of Adam and Eve…….rebelling, distrusting God, and blatantly disobeying Him.  Mary did not need to be baptized to share in the divine life of sanctifying grace as we must.   After all, the Archangel Gabriel declared unto Mary at the Annunciation: “Hail full of grace, the Lord is with thee.  Blessed are thou among women” (Luke 1:28-29).
Certainly, our Lord would only choose a woman of immaculate purity with not the slightest stain of sin to carry the Son of God in her womb for nine months.  Mary is the new Ark of the Covenant that contained in her womb the Bread of Life, a high priest, and prophet who speaks for God.  The original Ark contained a sample of manna, the staff of Aaron, the high priest, and the Ten Commandments given to Moses the prophet by God.

Where is it in the Bible that Mary is our Mother?  While suffering and dying on the cross to make reparation for our sins and thus open the gates of Heaven for us, our Lord gave us His own mother in addition to Himself in the Eucharist the day before.  St. John, from his position at the foot of the cross, personally reported in his Gospel: “He said to His mother, “Woman, behold thy son.’ Then he said to the disciple, ‘Behold thy mother” (John 19: 26-27).  That great gift was for all of us.

Mary was present in the Upper Room at Pentecost and provided prayers, comfort, counsel, and encouragement to the first apostles.  She does the same to us today as she nurtures our faith, prays for us, and intercedes for us.  Didn’t Christ give us His life, His all because of His infinite love for us?  And even to this day that includes His very self, His body and blood in the Eucharist and in addition, His dearest mother to help us to navigate the long, narrow, and arduously difficult road to Heaven.

How can we call Mary, the Mother of God who created her?  Critics forget that Christ has two natures…….human and divine.  Mary is the mother of God only in the sense that she was God’s instrument in giving birth to the human manifestation or human nature of the Son of God.  Through Mary, the Second Person of the Blessed Trinity became one of us to teach us how to live and to save us from our sins.

Mary gave her fiat (yes) to the great mission God asked her to carry out by saying to the Archangel Gabriel with great humility:  “Behold the handmaid of the Lord; be it done to me according to thy word” (Luke 1:38).  Thus Mary heroically trusted in God and took on the awesome responsibility to give birth to the Son of God and raise Him to adulthood.  Christ received His genetic makeup from both Mary and the Holy Spirit who overshadowed her, the ever virgin.  Thus we say in the Apostles Creed and the Nicene Creed “and she conceived by the Holy Spirit”.  In the Upper Room years later, the Holy Spirit overshadowed the apostles and Mary again on the first Pentecost.  We receive many of the same graces in the sacrament of Confirmation.


Simeon prophesized to Mary that a sword would pierce her heart (Luke 2:35).  From this comes the “Seven Sorrows of Mary”:  1) Simeon’s prophesy; 2) the slaughter of the innocents & flight to Egypt; 3) the loss of the child Jesus in the temple; 4) meeting her son on the way up to Mt. Calvary; 5) the Crucifixion; 6) taking Christ down from the cross; and 7) the laying of the body of Christ in the sepulcher.  Our blessed mother endured each sorrow with grace, with faith, courage, and above all, TRUST that God would make good come out of it and His will would ultimately prevail.

Because the Immaculate Heart and the Sacred Heart are so united, Mary must have intensely suffered with her son for us on Good Friday.  Some theologians even call her a co-redeemer or “Co-redemptrix”.  This of course would have to be studied thoroughly by the theologians and marianologists with much prayer before the Pope could infallibly declare that concept a dogma.  According to one theory, at the moment that the centurion pierced the heart of the dead savior, Mary’s heart was pierced in some way as she felt intense pain there.

St. Pope John Paul II had such a devotion to Mary that he put on his papal coat of arms, the words in Latin, “Totus tuus” or “All yours”.  The Apostolate of Family Consecration (Catholic Familyland), the family retreat center, promotes the concept that Mary will magnify any prayer, good example, sacrifice, or action we offer to God through her.

In sum Mary’s Immaculate Heart and her son’s Sacred Heart are so intimately united that her will is completely subservient to God’s will.  Thus her role is to carry out the will of her son and to lead souls to God as the great evangelizer……to Jesus through Mary.

Be sure to attend Adoration on Sunday to worship Jesus Christ, who is mercy & love, and honor His mother and our mother of mercy in this Year of Mercy.  Perhaps you can begin the Total Consecration to Mary according to St. Louis de Monfort.  It will be SPECIAL.

Posted by Paul Sebastian at 7:52 PM