Military chaplains of all faiths have done a wonderful job throughout history.  One beautiful example of the faiths working together are the four military chaplains that gave their life jackets to soldiers who did not have one when the U.S. Dorchester was hit by a German torpedo on February 4, 1943.  They were Methodist, Jewish, Dutch Reformed, and Catholic.  For more detail on the four chaplains click on
http://www.historyplace.com/specials/calendar/docs-pix/feb-four-chaplains.htm.
There are ten American military chaplains, who have received the Congressional Medal of Honor (including a Confederate chaplain who received the equivalent Southern Cross of Honor), the military's highest award for heroism, since it was established in 1861.  Most were Catholic.  The qualifications for being awarded the Medal have been tightened up and refined over the years, but it is awarded to a member of the U.S. military for acts of intrepidity and gallantry above and beyond the call of duty while involved in combat operations.
Four medals of honor were awarded to Union chaplains for heroism during the Civil War, all of whom were Protestant Christians.  A fifth chaplain may be added……. a Catholic priest serving the Confederate Army.  Fr. Emmeran Bliemel, O.S.B., was killed at the Battle of Jonesboro while administering last rites -- the first American chaplain to die on the field of battle.  Since the Civil War, five chaplains received the Congressional Medal of Honor.  All  were Catholic.

Each Veteran’s Day, St. Louis Church Gallipolis, Ohio honors military chaplains in an article as a bulletin insert.  You will see that chaplains fill an indispensable role in the military, but secularists are trying to eliminate them entirely.

Let us honor this year Navy Commander Fr. Joseph Timothy O’Callahan S.J., who served in World War II.  Upon retirement in 1953 from the Naval Reserve, he was promoted to Captain, an unusually high rank for a Chaplain.

Born in 1905, Fr. O’Callahan joined the Jesuit Order in 1922 and was finally ordained after a long period of preparation and study in 1934.  He must have been brilliant because the Jesuits assigned him at the age of 24 to teach Mathematics, Philosophy and Physics at Boston College (1929-37), then as Professor of Philosophy at the Jesuit Seminary of Weston College (1937-38), and Director of the Mathematics Department at Holy Cross College, Worcester, Massachusetts (1938-40).  With that scholarly background as a Jesuit priest, who would think that Fr. Joseph would become a war hero?

The world was already engulfed in the flames of World War II which started in September 1939.  Although the United States had not yet entered the war, Fr. O’Callahan saw a need and joined the Navy as a chaplain in August 1940.  After assignments at different Navy bases and two years on the aircraft carrier Ranger, he was assigned to another carrier, the Franklin in March 1945.

The U.S.S. Franklin with its 3,200 men was part of a task force whose mission was to track down the Japanese fleet and destroy its ships and air power.  Accomplishing that mission would practically end the War with Japan, perhaps making the atomic bombing of Hiroshima and Nagasaki unnecessary.  Only 16 days later, they confronted the Japanese fleet just 100 miles from Japan.  Waves of Navy planes took off at early twilight for bombing runs on Japanese ships.  Fighter planes escorted the bombers and patrolled the area to protect the Franklin against Japanese air attack.  They expected dogfights with Japanese aircraft.  Before each wave Fr. Joseph visited the various pilot ready rooms, prayed with the men, and gave them general absolution.

The Franklin was both a floating airport with large amounts of gasoline and was also an ammunition dump full of bombs and rockets.  Obviously, the Franklin was the primary target for Japanese planes. 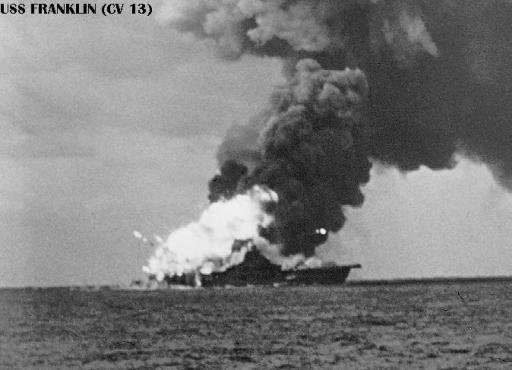 Then all hell broke loose.  A Japanese bomber got through the air defense and dropped two one thousand pound bombs on the carrier.  One penetrated the flight and gallery decks and exploded in the hangar. Within seconds, gasoline ignited and a wave of searing flame raced down the three football-field length of the hangar and spread from one exploding plane to another.  As so vividly described by Lawrence P. Grayson , “Father O'Callahan retrieved a vial of holy oil and his helmet marked with a large white cross as he made his way through passages filled with flames and smoke to the open area above. On the hangar deck, bombs and rockets, engulfed in a mass of flames, were exploding at a rate of about one per minute.”

“Father continued upward to the flight deck. Here nearly 90 percent of the 1,000-foot apron was aflame. The clear portion was full of burned, mangled, bleeding bodies. He spent a few moments with each of those who were alive, praying, absolving, anointing. Explosions tore apart the steam lines and the boilers shut down. By 9:30 AM, the ship was powerless and listing. Twenty minutes later, a rear service magazine of five-inch shells exploded, raining debris onto the deck.  The fury brought disorganization.  Key officers were dead, and many chiefs, if alive, were dispersed or trapped. Flames, explosions and noxious smoke smeared faces and uniforms making it almost impossible to recognize anyone from a distance. One thing stood out, however, the white cross on the chaplain's helmet. It had the power to inspire.” 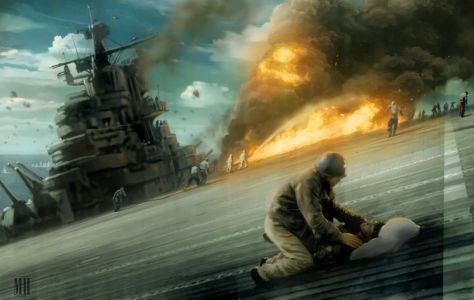 “Depleted hose crews needed help. Father rallied a group of men to join him on the hoses. When a live, thousand-pound bomb was spotted on the deck, the chaplain stood by for moral support while a team defused it; then he mustered a group of men to drop it overboard. When the fires were pushed back from the forward gun turret and its ready-ammunition magazine, hundreds of five-inch shells stored there had to be jettisoned before they exploded. Father O'Callahan had men form a chain, taking his turn in the line, to pass the hot shells from the magazine to the edge of the ship where they were dumped. He then joined a crew to flood a lower-deck magazine whose ammunition could not be easily unloaded.”  (See video at http://www.tfp.org/tfp-home/focus-on-history/fr-joseph-ocallahan-the-bravest-man.html.)

“When the fires on the hangar deck began to subside, Father led a hose crew through a smoke-filled, dark passage to the area. On the flight deck, as the fires receded, six loose, but live, thousand-pound bombs were discovered. The chaplain was there encouraging the men as a hose crew worked to cool the bombs so others could defuse them.”

Somehow the Franklin survived.  The engineers were able to make emergency repairs and get the boilers restarted.  By the morning of the 20th, the Franklin was moving under its own power.  All day and night, the priest and the Protestant chaplain held a brief prayer service for each of the 724 fallen sailors before burial at sea.  Fr. Joseph was wounded, but carried on.  On April 3, one month after it had left, the ship limped into Pearl Harbor, Hawaii.

The ship's Commanding Officer described Fr. O'Callahan as "the bravest man I ever saw."  For his heroism in helping with his leadership to save an aircraft carrier and its 2500 surviving sailors on board who otherwise could have perished, President Harry Truman presented the Congressional Medal of Honor to him in 1946.  He is indeed part of the “Great Generation” of military and civilians that lived through the Great Depression and won World War II through their contributions to the war effort at home and abroad.

Before his release from active duty in November 1946, Father O'Callahan served on a new aircraft carrier, the Franklin D. Roosevelt.  While continuing to serve in the Navy Reserves until retirement in 1953, Fr. Joseph taught at Holy Cross College as a professor of philosophy and mathematics. He died in Worcester on March 18, 1964.  The destroyer escort ship USS O'Callahan 1968-1994, was named in honor of this Jesuit priest, who so valiantly served both our God and our country.  Sr. Rose Marie (Alice O’Callahan), his sister attended the christening.

For a fascinating history with bibliography of Catholic chaplains in the U.S. military go to http://www.tfp.org/tfp-home/focus-on-history/catholic-army-chaplains-americas-forgotten-heroes.html.  For the official Dept. of Defense Medal of Honor Citations of Fr. O’Callahan and the other Catholic chaplains, go to my Blog #127 “Heroic Catholic Chaplains Who Have Been Awarded the Congressional Medal of Honor”.
Posted by Paul Sebastian at 10:33 PM