(158) Becky Riepenhoff's Journey Up the Mountain, Her Message, and Our Own Personal Journeys Soon to Come 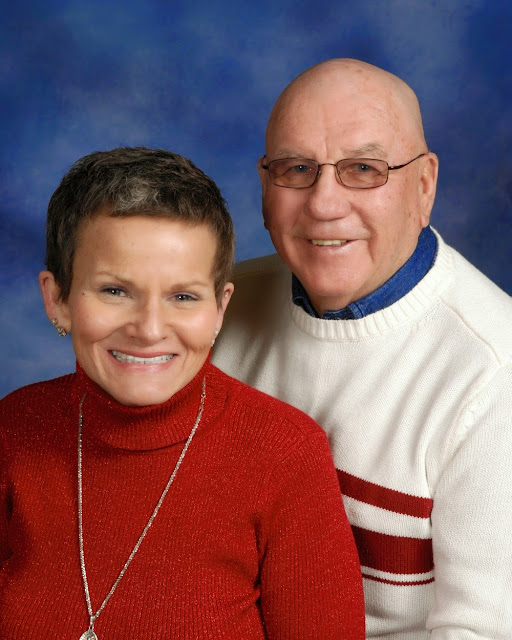 Today (May 22) marks one year since the passing of Elizabeth Ann “Becky” Skidmore Riepenhoff, who left an indelible mark upon the parish of St. Louis Church Gallipolis, Ohio.  Her spirit was unsinkable as shown in the following article she wrote in 2011.  She inspired and taught us and the citizens of Gallia, Meigs, and Mason (WV) Counties through the newspaper.  Becky continued to inspire and teach us in our parish community until her death in 2014 at the age of 57 as we’ll elaborate in the epilogue after her article.  Her husband Jay, ever true to his marriage vows, was always faithfully with her through it all…….another great lesson for our very fragile marriages of today.

Journey Up the Mountain: My Message of Faith, Hope and Love
Written By Becky Skidmore Riepenhoff
Published in the Gallipolis (Ohio) Sunday Times-Sentinel October 23, 2011

In the early spring of 2009, I started having pains in my neck, shoulders, lower back, right hip, and leg.  Since I have always had yearly checkups and quit smoking and drinking at age 35, I just thought: “This will go away”.  No one wants to hear someone complain.  We were taught to keep your complaints to yourself.  Needless to say, the pain became worse.  I had leg cramps that would literally take me to the ground.

This past February, I was suffering 24 hours a day.  My pain was a 10.  I called my primary care physician again, went to see him, explained my pain to him, and told him I spent most of my time on two heating pads.  I would take a rolling pin and roll it up and down my right leg to try to relieve some of the pain.  I explained to him that I had a chance to see a pain management doctor, but my primary care physician wouldn’t refer me until I went to physical therapy.  “No way”, I thought.  When I arrived home, I was in tears.  My pain was horrific.  My husband Jay said, “You need a second opinion; you can’t continue to live like this.

Jay called Dr. Doug Jones.  Dr. Jones saw me that afternoon and, within four day, Dr. Jones had diagnosed me, and I was on my way to Adena for more tests and to see an oncologist.  Dr. Doug Jones saved my life.  When you’re sitting in the doctor’s office and he tells you that you have cancer, you go into an out-of-body experience.  You say, “No, not me.  This is not happening.”  Then all of the negative thoughts flood your mind:  death, family.  “Oh no”, you say to yourself.  “I’m not going to die.  I’m fighting for my life.”  I call my cancer the “Devil’s curse”.  My treatments I call “climbing the mountain”, and when I reach the top, that will be remission.  My doctor says there is no cure for my cancer, but it is treatable.  I won’t accept that.  I believe in miracles.  They happen every day.  I believe in the power of prayer.

I cannot begin to thank all of my friends, family and acquaintances, and people who have heard about me through other friends, from all the prayers, cards, flowers, phone calls, and, of course, Facebook messages.  If you have been diagnosed recently with a life-threatening disease, or you just need someone to talk to or pray with, you can call me.  I’ll be right over.  I can help!

I will never give up.  I’m climbing the mountain every day.  With all my prayer warriors, I will reach the top.  It’s in sight.  (Becky Riepenhoff has multiple myeloma, a cancer of the immunoglobulin producing plasma cells found in the bone marrow.  It is a cancer that involves the immune system.)

Becky did climb to the top of the mountain and did have a remission.  She utilized that precious time to again teach our kids in our Parish School of Religion.  Even after the cancer came back, she heroically continued to teach until it was physically impossible.  One Sunday she somehow made it to Mass in a wheelchair for one last time.  Heartwarming was seeing her kids who were present come up to her one by one and give her big hugs.  She loved those kids so much and they reciprocated that love.  May Becky inspire us to learn more about the beauty and richness of our faith through spiritual reading and in our parish Bible Study and then share it with our children and friends.  Even though parents are the primary educators in the faith, the need for good teachers is great in our Parish School of Religion to help parents with their crucial mission of passing on the faith to the next generation.

I also found a card Becky wrote to her “sister in faith” with a gift of a prayer shawl three months before her death.  Each stitch in the two shawls crocheted by a friend of hers was a prayer for healing.  She wrote: “I know you understand and love Jesus like I do.  So wear your prayer shawl proudly and serve the Lord.  In God’s love and mine, Sister Becky……..Praise the Lord and all his gifts to us.”  What a demonstration of heroic faith in the midst of adversity!  Becky continued with her unshakeable love of God and unsinkable trust His providence.

Indeed Becky is healed now.  She certainly received the ultimate healing of everything that might have ailed her.......healing in eternity of all physical, spiritual, and emotional wounds and imperfections.

Why didn’t God give Becky a complete healing on earth?  Why did He allow the cancer to come back?  Why didn’t He let us have this treasure (Becky) for a few more years?  These are mysteries that even the most learned theologians cannot really answer.  Becky couldn’t either, but she did know how to trust that God would make a much greater good out of all that she went through.  Becky did know that by uniting her crosses with the Lord’s cross and by offering them up to Him as a dynamic prayer for the Church, the missions, a better world, and for her loved ones…… her suffering would bear much fruit.  St. Therese the Little Flower taught us that in her book, “Story of a Soul”.  St. Pope John-Paul developed a theology of suffering.  See my blog #133 at paulrsebastianphd.blogspot.com for the link and more detail.

In fact, Becky was a member of the Third Order of the Victim Soul movement.  The members resign themselves completely to the Divine Will.  Thus they attribute everything negative that happens to them as part of the permissive will of God (He generally does not cause suffering, but allows it to happen as part of the human condition)…… offering all of the crosses to God for humanity of the past (time does not exist for God), present, and future.  See www.divinewill.org and www.divinewilltrinity.org.  All of our prayers were very useful; they helped Becky to get through all of this and climb the ultimate mountain to her heavenly reward and her ultimate healing.

The Quest for Holiness.  One priest commented:  “Those who die of cancer die like saints” because they have the opportunity to prepare.  That’s certainly true if one spiritualizes the suffering and continues to trust.  Jesus Christ, the Son of God, and every saint without exception have had to suffer to reach their glory.  Can we expect to be different and have an easy road to heaven?  That’s all part of the human condition that began with the Fall of Man (generic) in the Garden of Eden.  Suffering is an opportunity to attain holiness, an absolute necessity to come before the throne of God……..if not here then certainly in purgatory, that happy but extremely difficult place of purification.
May the example of Becky’s courage and faith strengthen each one of us, who sooner or later will have to confront cancer, heart disease, some serious accident, the crosses of old age, or some other infirmity in our own personal journeys to eternity.   The way Becky carried her cross made her a saint.  With the help of God’s grace our crosses properly carried with faith, trust, and courage will also make each one of us a saint someday.  Thank you Becky for all that you did in our parish and are continuing to do with your prayers.  Becky, you victoriously climbed the ultimate mountain (your personal Calvary) to heaven.  May we follow you on the journey up this ultimate mountain and do as well with our personal Calvaries.   May we be faithful to Christ and His Church.  Then we’ll all be together again with joyful hugs of VICTORY!

Obituary
Elizabeth Ann “Becky” Skidmore Riepenhoff, 57, of Jackson, Ohio, passed away Thursday, May 22, 2014 at her residence surrounded by her family. Becky was born April 28, 1957 in Gallia County, Ohio, the daughter of the late Warren and Mary Alice (Lawless) Skidmore. She was a member of St. Louis Catholic Church, Gallipolis, where she taught Catechism. A 1976 graduate of North Gallia High School, she was a member of the Jackson Garden Club.

In addition to her parents, Becky was preceded in death by husband, David Grant and brothers, Ronnie Skidmore and Larry Skidmore.

Funeral services will be conducted at 1 p.m. Tuesday, May 27, 2014 in the St. Louis Catholic Church, 85 State, Gallipolis, Ohio with Fathers Joseph Trapp and Thomas Hamm officiating. Burial will follow in the Skidmore Family Cemetery, Evergreen, Ohio. Friends and family may call at the McCoy-Moore Funeral Home, Wetherholt Chapel, Gallipolis Monday from 4 to 8 p.m. A Rosary Service will be conducted Monday at 8 p.m. at the funeral home. Pallbearers will be Arthur, Joseph, David and Hunter Riepenhoff; Eric Skidmore, Christopher Tackett, Jeff McAvena and Jeff Roach.

In celebration of her vibrant life, everyone is invited and encouraged to wear Becky’s favorite color – pink. In lieu of flowers, the family requests a donation in Becky’s memory made to: Heartland Hospice, 205 North St., P O Box 400, Lucasville OH 45648. Condolences may be sent to www.mccoymoore.com