(135) Inauguration of the Basilica of St. Mary of the Assumption Marietta: a Jewel on the Banks of the Ohio:

The official name of St. Mary's Church Marietta is now the Basilica of Saint Mary of the Assumption.  I heard that the Inaugural Mass solemnizing the designation of St. Mary's Church Marietta by Pope Francis as a new basilica on November 5 was beautiful.  The overflow crowd had to watch it on closed circuit TV in the basement.  Now we can have a great seat in our living room to see it replayed on EWTN March 1 at 3 pm.  Or you can watch it on the internet at ewtn.com.  The video may be later archived on ewtn.com and diosteub.org.

The Basilica has great historical significance, since the first Mass ever said in the Northwest Territory was said at the confluence of the Muskingum and Ohio Rivers by Father Joseph de Bonnecamp, chaplain to a French expedition from Quebec in 1749.  One can see a huge painting of the scene, entering or leaving the Basilica on the left side.  There's an amusing 21st Century anachronism in it.  The two parish dogs have been immortalized and made a part of the painting.

After the original church, built close to the river in 1853, had to endure four floods since 1884, Fr. Francis M. Woesmanin and his Advisory Committee spared no pain to build a magnificent church that was dedicated in 1909.  In those days the cost was $129,000 a small fraction of what it would cost today. Emile M. Uhlrich, the architect from Cleveland, described it as "Spanish Renaissance" style, a blend of Romanesque and Baroque.  Being at the geographical center of the Diocese of Steubenville, it could be the Cathedral, having been the de facto co-cathedral in which the Bishop has a second Chrism Mass every Tuesday of Holy Week.  For a detailed history, click on http://stmarysmarietta.org/Basilica-History.php. 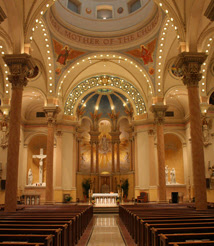 By the time Msgr. Campbell became pastor in 2004, the church showed structural weakness which endangered the priceless stained glass windows.  A major restoration was in order.  With the help of his parishioners, he did a tremendous job in remodeling and restoring the century old church by 2009 and putting in art imported from Italy, including a beautiful mosaic of the Madonna and the Christ child.  The three large stained glass windows, imported from Munich-Germany in about 1914 for the transept and the rear of the nave, are stupendous.  God certainly deserves the best and in both 1909 and 2009, the parishioners of St. Mary’s gave our Lord their very best.  I've been all over the world and I'm convinced that the now Basilica of St. Mary of the Assumption is one of the most beautiful churches in the world.  My first visit felt to me like a little taste of heaven that millions of us, rich and poor, Catholic and non-Catholic, can enjoy and be inspired in awe.

For these reasons St. Mary's Church has the special honor of now being officially called a basilica, probably beyond the dreams of Fr. Woesmanin.  As I understand, only 67 churches in the USA and 327 in our hemisphere have this great honor and only three in the state of Ohio.  Click on http://en.wikipedia.org/wiki/List_of_basilicas for the complete worldwide list.  A basilica is generally large and exceptionally beautiful.  It must have particular importance as great architecture, is a special shrine, has great historical significance, etc.


Thus the Basilica of St. Mary of the Assumption is by far the best place to hold the annual Diocesan Men’s Day of Renewal.  The 2010 and 2011 Men’s Conferences were held there.  It gives so much class and dignity to the annual Diocesan Men's Day of Renewal.  Now more than ever it is a worthy pilgrimage site with possible indulgences attached. See http://stmarysmarietta.org/Spiritual-Privileges-for-Visitors.php for an explanation.  Tours are available by clicking on http://stmarysmarietta.org/Group-Tours.php


The Diocese of Steubenville extends 233 miles (4 hours drive) from Carrolton in the north to Ironton in the south.  Steubenville is the population center of the diocese, but is in the north (35 miles from Carrolton).  However, Marietta is the geographic center (119 miles from Steubenville and 120 miles from Ironton), but does not have very many Catholics.  As a result, Chesapeake and Ironton (240 miles from Steubenville) in the extreme south are almost isolated from the rest of the diocese. The cost of a new cathedral in Steubenville is extremely high.  A possible solution would be to simply remodel the current Holy Name Cathedral, which they are doing.  Then they could have two co-cathedrals, one in Steubenville and the other in Marietta.  In this way the diocese could be renamed the Steubenville-Marietta Diocese as is the case with the Wheeling-Charleston Diocese across the river, which encompasses the entire state of West Virginia. 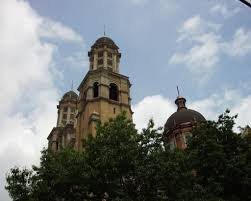 The Basilica, a blend of Romanesque and Baroque architecture, seems to have a Byzantine flavor and reminds me of the old Byzantine Cathedral, San Sofia in then Constantinople, now Istanbul-Turkey (see http://en.wikipedia.org/wiki/Hagia_Sophia).  I was fascinated during my 1962 visit by the beautiful mosaics which the Muslims covered with plaster in converting it into a mosque in 1453 and unwittingly preserved them in its original beauty for almost four centuries until 1931 when converted into a museum.  By the way, Msgr. Campbell is bi-ritual.  That is, he is one of very few priests to have the faculties of saying Mass in both the Latin Rite and the Byzantine Rite.


Details with photos of the restoration, the beauty of the present basilica, and the inauguration together with Mass times and activities, click on http://stmarysmarietta.org.

Joseph Schmidt, the Director of Religious Education at St. Mary's sent me the e-mail below with more detail concerning the inauguration of the Basilica.  He wears several hats:  Pastoral Associate/Director of Religious Education, Basilica of Saint Mary of the Assumption; Marriage Ministry Coordinator, Diocese of Steubenville; and Diocesan Respect Life Coordinator for the Southern Deaneries.  If you’re near Marietta, stop by at this magnificent basilica on 506 Fourth St. in Marietta just off Route 7 North.  Every year St. Louis Church Gallipolis offers us the opportunity to go there in the parish van for the Chrism Mass on Tuesday of Holy Week.  Take advantage of it.

Congratulations to Msgr. Campbell, the parishioners,  and staff upon your church being given that great honor of being named a Basilica.  May the Basilica attract many pilgrims and sanctify its members.


Now the next epic step for the community of the Basilica of St. Mary of the Assumption is to have perpetual adoration 24/7.  That would require the commitment of at least two parishioners ( one primary and one backup) every hour 24/7 in Eucharistic adoration.  It is very doable in a large parish if the will is there in some 100 dedicated people willing to give three or four hours a week each in adoration because there must always be someone present during the exposition of the Blessed Sacrament.  Since our Lord cannot be left alone, one person from the previous hour would have to stay over if no one shows up for the following hour.  The Basilica has a beautiful chapel called "The Chapel of the Three English Marytrs" (St. Thomas More, St. John Fisher, and St. Thomas Becket) to the extreme right of the altar which would be ideal for perpetual adoration.  Believe me, perpetual adoration would make a very significant impact on the parish and transform it, perhaps radically.  If not feasible right now, keep praying until the parish is ready for perpetual adoration.  A number of parishes in the Phoenix Archdiocese has had it going for several years now.
----- Forwarded Message -----From: Joseph Schmidt <stmarysdre@gmail.com>
To: Joseph Schmidt <stmarysdre@gmail.com>
Sent: Monday, February 24, 2014 3:59 PM
Subject: BREAKING NEWS -- The Inaugural Mass to be broadcast on EWTN March 1

We just learned the news:

The Inaugural Mass Solemnizing the Designation of Saint Mary of the Assumption as a Basilica will be broadcast on EWTN on Saturday, March 1, 2014 at 3:00 PM.

Saint Mary of the Assumption Church in historic Marietta, Ohio, was designated as a Minor Basilica by Pope Francis in a decree dated June 13, 2013. After several months of preparation, the Inaugural Mass Solemnizing the Designation was held in Marietta on November 5, 2013.

The Reverend Monsignor John Michael Campbell, Rector of the Basilica, and 50 priests con-celebrated the Mass for approximately 700 people.
The symbols of the Basilica - the Umbrellino and the Tintinnabulum - were blessed and formally placed in the sanctuary during the Solemn Mass.

Viewing the Mass:
Check with your local cable provider for station information in your area, or watch the streaming broadcast from EWTN's website.

More information about the Basilica of Saint Mary of the Assumption can be found on our website.

A special documentary DVD about the Basilica and it's history is in the final stages of production and will be available for sale very soon for $10 each. (Anyone wanting more information on the DVD, or to place an order, can simply contact me.)
In the Peace of Christ,
Joe Schmidt