(104) Our Lady of Guadalupe (I): Binding the Americas Together 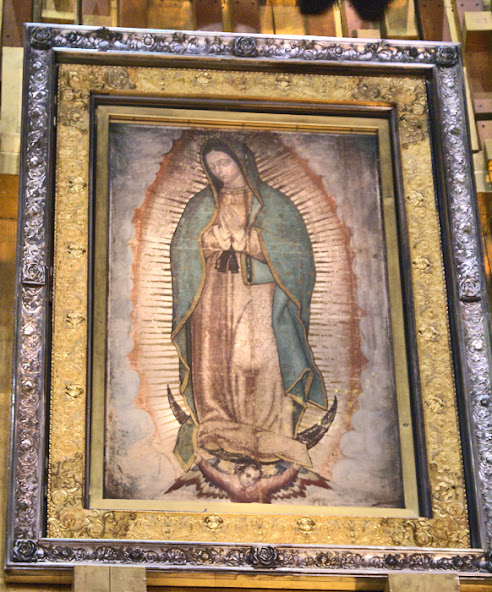 The authentic tilma of Juan Diego on which appeared the image of Our Lady of Guadalupe behind the main altar of her shrine in Mexico City.  The untreated cloth should have deteriorated in about 15 years, but remains intact and in excellent condition almost five centuries later.
Today is the feast of the Immaculate Conception, the patroness of the United States.  Mary, as Our Lady of Guadalupe (Nuestra Señora de Guadalupe), is also the patroness of Mexico and all the Americas.  Only eight weeks after receiving the statue of the International Pilgrim Virgin of Fatima, St. Louis Church Gallipolis, Ohio is again privileged to receive the image of Our Lady of Guadalupe on her great feast.
The Knights of Columbus is sending it to parishes all over the U.S. for a day or two in its 2011-2013 Marian Prayer Program as part of the New Evangelization.  Each of its 72 jurisdictions (each state, almost every province in Canada, Mexico, the Philippines, Poland, Dominican Republic, Guam, and Puerto Rico) has a copy of the image to circulate an image.  This image touched the original image and the frame has some of the earth from where Mary appeared.
St. Louis Church will receive the 30 x 18 inch image the evening of Tuesday December 11 with a talk of mine on the history and the meaning of the image, benediction and rosary.  The Blessed Sacrament will be exposed for adoration through the night into her great feast with Mass and benediction at 5:30 pm in the evening……over 24 hours in all.  Then the image will remain on display below Mary’s altar and statue through the Masses of Sunday December 16.  Different parish groups are invited to take an hour of adoration as our Mexican American families will do.

In this way during the 2011-2013 Marian Prayer campaign of the Knights of Columbus, which includes the Year of Faith, Mary will continue her great mission of nurturing our faith and bringing us closer to her son as she has done over the centuries.  St. Louis Church is especially privileged to have the image of Nuestra Señora de Guadalupe with us on her great feast.  To really appreciate the image, it is imperative to understand the history and meaning of the image which is included in this blog and the following one.

For a beautiful video story of Our Lady of Guadalupe, click on https://www.youtube.com/watch?v=BbK2ya0zqTU&ebc=ANyPxKpicRwpzFW-kixVqGR_uYX3WyZyVMjswVGdbN9rgYCv6HXRtueUxuA6BHbxS2WeeH7NDBKBZQu4-PbvyRjUohuPmpWgyg.   There's also a shorter one by Matthew Leonard on his pilgrimage there at https://www.youtube.com/watch?v=-mWcqhRW3-4&ebc=ANyPxKpicRwpzFW-kixVqGR_uYX3WyZyVMjswVGdbN9rgYCv6HXRtueUxuA6BHbxS2WeeH7NDBKBZQu4-PbvyRjUohuPmpWgyg. 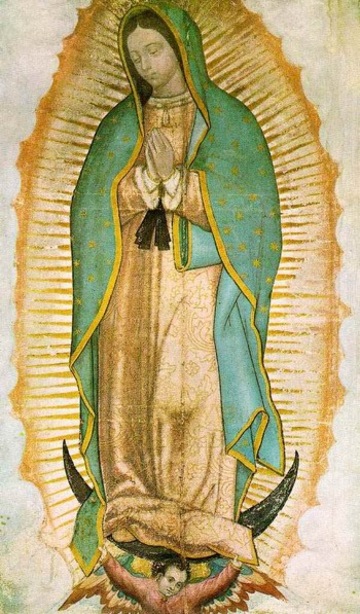 OUR LADY OF GUADALUPE (I):  BINDING THE AMERICAS TOGETHER

On April 1, 1965, I was sent to Mexico City to finalize my language training for one month before finally arriving in Peru on May 1 as a Papal Volunteer for Latin America (PAVLA) to teach Chemistry in the Universidad Católica de Santa Maria in Arequipa.  As Mary would have it, she made sure that I be placed with a family in a neighborhood about a fifteen minute walk from the great shrine of Nuestra Señora de Guadalupe (Our Lady of Guadalupe).  It was one of the most beautiful experiences of my life.  I went there every day.  It seems that since my mother and I consecrated ourselves to Mary when I was about 12 years old, I would stumble on one Marian shrine after another, especially in South America.

Although she is usually identified with Latin America or Mexico alone, Nuestra Senora de Guadalupe is very appropriately the patroness of all the Americas and the patroness of the unborn.  Thus she belongs to all of us.......”Yankee Gringos” and Latinos alike.  By this bond of common devotion we Americans –north and south- can through Mary be united as never before especially in these most critical times.
It was Mary, who on December 12, 1531 in spectacular fashion, planted the seeds of her Son's work in the New World.  The Bishop asked for a sign of the authenticity of Mary’s appearance before he would build the shrine that Mary had requested.  Thus Our Lady instructed St. Juan Diego to fill his tilma (like an apron) with Castilian roses on December 12, 1531 and present them to the Bishop.  When he dumped the flowers at the Bishop’s feet, Mary’s image miraculously appeared on the tilma.  The image contains a message, which inside the short span of seven years, brought 8,000,000 Mexican Indians to the Faith, roughly equivalent to the number of those lost to the faith in the Protestant Reformation.  Not since the days of the early Christians did the Faith spread so rapidly.  It is no wonder that Mary is also the patroness of the missions!
For more images, you may click on: https://www.google.com/#hl=en&tbo=d&sclient=psy-ab&q=images+of+our+lady+of+guadalupe+and+juan+diego&oq=Images+of+Our+Lady+of+Guadalupe+and+&gs_l=hp.1.0.33i29l3.3942.19994.0.25969.36.29.0.7.7.0.393.6737.0j9j18j2.29.0.les%3B..0.0...1c.1.KG6SPt8mQsI&pbx=1&bav=on.2,or.r_gc.r_pw.r_qf.&fp=eb30f69ee1949055&bpcl=39314241&biw=1230&bih=715.

For a detailed history, see http://www.michaeljournal.org/guadalupe.htm and http://erwin.bernhardt.net.nz/america/mexicoourlady.html with many links even to information on Cardinal Mindzenty and the Hungarian Revolution.  For a fabulously fascinating video with even more revelations, click on http://www.youtube.com/watch?v=xe4Ozm0oENk.  There you can click on other videos in Spanish, English, and even one in Polish.


Since Nuestra Señora was such an impetus to the beginning of the Faith in our hemisphere and has held the Church together through years of Mexican persecution, particularly in the 1920s; she can play a critical role in revitalizing and renewing our Faith in this Year of the Faith, which she planted well over four centuries before.  Mexico is now showing such signs.  Having emerged from persecution, Mexico is already the first Latin American country to send missionaries into the field, particularly to the United States.  May Mary nurture our faith in a special way in this the Year of Faith.  That has been the mission of Mary through the centuries.

The Basilica of Nuestra Señora de Guadalupe in Mexico City (See http://www.sancta.org/basilica.html) is every bit as important as Lourdes and Fatima; yet most Catholics outside of Mexico know little or nothing about the shrine and the fascinating history behind it.  The shrine in Mexico City is the most visited shrine in the world.  There are other shrines to Our Lady of Guadalupe…..Windzor, OH; La Crosse, WI; Passaic, NJ; Riverside, CA; Des Plaines, IL; Pt. Arthus, TX; San Antonio, TX, etc.

As a pilgrimage center, the Basilica of Nuestra Señora hosts an average of 27,000 pilgrims per day or 10 million per year, reaching a tremendous peak on her feast day, December 12.  The feast is so big in Mexico that thieves take a day off and such crimes are rare for one day.  They come by every means of transportation from planes to rickety-rackity buses and even on foot.  A tourist at first may have the impression of a superstitious faith in what seems like a carnival atmosphere in some respects.  Eventually one can only become impressed by the deep faith and devotion that the simple poor exhibit. On December 12, there are local celebrations in many small towns with processions.  In Chicago, 100,000 people attended a celebration.

The various groups of workers and even whole towns offer small floats of flowers with such signs as “Estamos a tus pies, Madrecita”.  As an act of thanksgiving for various favors and even unauthenticated miracles, they bring flowers and often walk on their knees the 150 yard distance from the plaza entrance to the altar.  Their approach certainly isn't intellectual, but they'll probably get to heaven before all of the intellectuals.

Perhaps the importance of the Basilica can be summarized in Mary's own words to Juan Diego:

One can notice here a poetic quality which is also in conformity with the Aztec style of poetry and the Hebrew as well.  At the same time there is evident the literary quality of expressing one thought with an abundance and profusion of expressions.

Reflections of Human Figures in the Right Eye of the Image were discovered in 1951 in enlarged photographs as shown above.  Although there is some controversy, all of the 3 artists, 5 photographers, and 11 eye doctors who investigated this discovery, concur in seeing at least one if not three human figures in her right eye.  Edward Gebhardt was easily able to duplicate this by photographing similar reflections of three persons in the eyes of a young girl.  Modern digital image processing found reflections of more persons in the room.  The reflections followed the anatomy and curvature of the eye according to the Perkin J. Sampson Law.  (See http://www.sancta.org/eyes.html.)

From these findings it is believed that this divine work of art is so detailed that St. Juan Diego, Juan Gonzales an interpreter, and Juan de Zumárraga, the Spanish Bishop are reflected in the eyes of Our Lady.  There is a striking resemblance to old portraits of the first two named men.  The miracle occurred as St. Juan Diego presented the Castillian roses to the Bishop.  Thus the image is like a colored photograph of the invisible Mother looking upon the scene.

Years later in the early 1980s, my cousin Fr. Thomas Loya, an artist, noted that the image cannot be a photograph because it has tiny imperfections, indicating that it is indeed a painting.  What human artist would even think of painting such minute microscopic detail as a reflection of three persons in an eye? There would be no need for such intricate work.  See http://www.sancta.org/eyes.html.

By promoting Our Lady in such little ways as hanging her picture in the various offices, homes, schools, etc. and occasionally mentioning her in conversation and correspondence, we can be her instruments as Mary fulfills her historical role of bringing souls to her Son.  Since she specifically chose an Indian, a Spanish Bishop, and a location central to both North and South America, Nuestra Senora is ideally suited to be the common patroness of our entire hemisphere.  Pope John XXIII recognized the importance of Our Lady of Guadalupe by composing a prayer to her on his visit to her church in Rome seven months before his death. Similarly, John Kennedy attended Mass at the Basilica in Mexico City in July of 1962 and Blessed Pope John Paul II offered Mass there during his four visits in 1979, 1990, 1999, and 2002.  To read the texts of two of his homilies there, click on http://www.vatican.va/holy_father/john_paul_ii/homilies/1979/documents/hf_jp-ii_hom_19790127_messico-guadalupe_en.html   and http://www.vatican.va/holy_father/john_paul_ii/homilies/1999/documents/hf_jp-ii_hom_19990123_mexico-guadalupe_en.html.  In the latter he asked Our Lady of Guadalupe to guide the new millennium.  Also see http://www.sacred-destinations.com/mexico/mexico-city-basilica-guadalupe for photos and books that can be purchased.
Posted by Paul Sebastian at 10:45 PM