(92) The Tremendous Dignity of the Worker & His Work: the Basis of Social Responsibility, Business Ethics, Labor Relations, and Productivity

The great dignity of every single person, ---active or retired, able or disabled, educated or illiterate, employed or unemployed, from the president of the firm down to the lowest laborer---,  is the  basis for the social teachings of the Church.  Each one of us is created according to the image and likeness of God (Genesis 1:27).  God dwells in each person; we are temples of the Holy Spirit (1 Corinthians 6:19-20).  Christ died for every one of us so that we may have eternal life in heaven.  Thus the worker should be treated as that dignity demands.

Jews, Muslims, and Christians all believe that even the lowest paid worker has this great dignity because s/he was created by God according to His image and likeness.  Christians of all denominations add that Christ as God loves each one of us so much that He suffered and died to save us from our sins and give us eternal life.  Christians draw inspiration from His words, "Whatever you do to the least of mine, you do it unto Me" (Matthew 25:40).  As I understand it, the Hindus use the word "Namaste" as a greeting, which means welcome and/or "I acknowledge the divine in you".  Secular humanists, in their own way also believe in the dignity of the person. 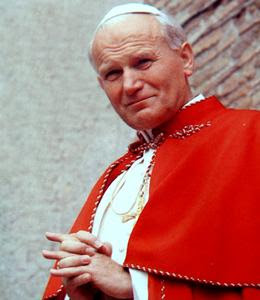 The great dignity of work was emphasized by Pope John Paul II in 1981 in his second encyclical, “Laborem Exercens On Human Work” (see http://www.newadvent.org/library/docs_jp02le.htm) .  It was devoted to the theology of work.  Work in itself has great dignity because man (in a generic sense) uses work to participate with God in creation which is ongoing.....to construct buildings, to create goods & services, and works of art.  After all God gave us dominion over the earth and all of its resources according to Genesis 1:27 to use them for the common good of all through work.......not selfishly for the select few.  Of course we have the grave social responsibility to use all of the resources of the earth without wasting them or harming God's creation, the environment.

Christians in general view work as a high calling.....a calling to be co-workers with God in unfolding the rich potential of His creation.  Martin Luther preached that even the most menial work should be done for the glory of God.  This  conviction led to the Protestant work ethic which some scholars say was a major factor in the economic development of the West after the Reformation.

St. Ignatius Loyola, advocated a similar work ethic ("Ad  majorem Dei gloriam") as part of the Catholic Counter-reformation.   Traditionally, the Catholic Church has used St. Joseph the Worker to promote the dignity of the worker and work (See Blog #81).  May 1 is his feast day.

These concepts have had a great influence upon business practice especially in regard to ethics, social responsibility, social justice, and legislation against abuses in the the workplace.....slavery, child-labor, unsafe & inhumane working conditions, unjust wages, etc.

For example, John Wesley pricked the conscience of 19th Century Britain.  Two of his disciples, William Wilberforce & Lord Shaftesbury were reformers in the British Parliament.  Wilberforce was very influential in the abolition of slavery and the abolitionists in America were similarly motivated. 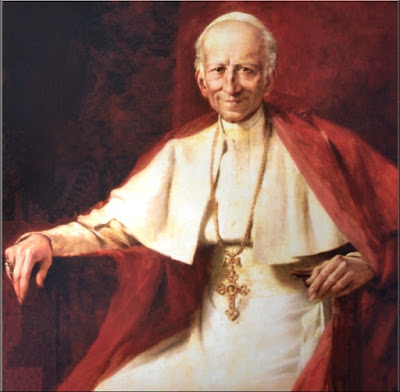 Leo XIII's May 15, 1891 Papal encyclical "Rerum Novarum - On the Condition of Labor” (www.papalencyclicals.net/Leo13/l13rerum.htm) had a world wide impact on social legislation and fomented a social conscience among managers.   It condemned the evils wrought by the Industrial Revolution due to the abuse of the profit motive as manifested in greed and unjust exploitation that were the seeds of social unrest, as well as atheistic Communism and Socialism.  These included such abuses as inhuman and unsafe working conditions, unjust wages, long hours, child labor, etc.  It condemned socialism which at that time was atheistic and negated basic freedoms and the right to own property.

According to the dignity of man, a person has a right to own private property and the means of production, but that right entails a grave social responsibility......the obligation to use that productive property for the common good of all.  God gave the riches of the earth to all, including our own personal talents to be shared and used for all......not to a chosen few.  The gifted and the affluent are stewards more than owners......a grave social responsibility to use them not only for themselves, but also for the common good of all.......to help others.

Pope Leo XIII condemned the Socialist class struggle as being unchristian.  Hate the sin, but love the sinner.  Each needs the other......Capital cannot do without labor and labor cannot do without capital.  There's a great interdependence there.  Both are indispensable means of production.

The encyclical asserted the right of Labor to organize and bargain with Management, which implies the right to strike as a last resort to be exercised in a responsible manner with the common good in mind.  Yet justice demands an honest day's work for an honest day's wage.  There's responsibility on both sides.  At the same time, the Government must protect the worker's rights and both sides from abuses by the other while promoting the common good of all.

The social teaching of the Church is really the compilation of the social encyclicals of Pope Leo XIII and his successors.  Each Pope updated the teaching of his predecessors without contradiction in a marvelous unity according to changing conditions.  Forty years later in 1931, Pope Pius XI wrote “Quadragesimo Anno - On the Reconstruction of the Social Order” (http://www.newadvent.org/library/docs_pi11qa.htm).  Pope Pius XII further updated them in his radio broadcasts in 1941.  Pope John XXIII followed with Mater et Magistra (Mother & Teacher) (http://www.papalencyclicals.net/John23/j23mater.htm) in 1961.  Pope Paul VI brought in other points with “Octogesima Adveniens - A Call to Action” (http://www.osjspm.org/document.doc?id=67) in 1971 and Pope John Paul II with Centesimus Annus in 1991, centenary of the landmark encyclical of Leo XIII (http://www.vatican.va/holy_father/john_paul_ii/encyclicals/documents/hf_jp-ii_enc_01051991_centesimus-annus_en.html) .

It was through the Newman Club that I got my love for the social encyclicals.  At the Louisiana State University Catholic Student Center, our Graduate Student Discussion Group discussed the two great social encyclicals of Pope John XXIII.......Mater et Magistra (Mother & Teacher) and Pacem in Terris (Peace on Earth).  Then as a lay missionary (Papal Volunteer sponsored by the Baltimore Archdiocese) assigned to Arequipa-Peru, I wrote a series of reviews of the social encyclicals from with Rerum Novarum (On the Condition of Labor) to Humanae Vitae (On Human Life) and Laborem Exercens (On Human Work) under the general title of “The Popes:  Precursors of Social Change” which really described the evolution of the social teaching of the Church.

Appreciating the Great Value of Each Worker.  Each member of an organization has a different personality and set of talents and skills that few others can duplicate as well in the organization.  In that way each person, including the lowest paid worker, is rather unique and contributes to the organization in a special way.  In time that worker at the end of the chain of command gets to be quite good at his/her job and is often sorely missed if absent for some reason.  Each job makes a contribution and is important.  Even the top executives in the firm cannot do the job of most of their subordinates.  For example, as a Chemical Engineer I was able to tell the technician putting in our new heating and cooling unit the theory of how it works.  But don't ask me to do install it.  The machine operator often knows more about his machine than the engineer and can give excellent ideas if they are welcomed.  Thus there is a great interdependence among all the employees and every worker has an important part in accomplishing the mission of the organization.

If we can accept the reality of the great value and dignity of the worker and his/her work either from a secular humanist or spiritual point of view, managers will appreciate, value, and treat the employee with love, dignity, and respect, s/he will have greater job satisfaction and be more  creative and productive.  If Labor and  Management can have these concepts in common, labor harmony will be enhanced.  If the employee feels s/he and his/her work are important, appreciated, and valued by his/her superiors, s/he will have greater job satisfaction and will be more motivated to give his/her very best effort.

Email ThisBlogThis!Share to TwitterShare to FacebookShare to Pinterest
Labels: Business, History, The Faith