(88) Andrew Kentigern Moore: Martyr for the Cause of Life -- Giving His Life So that Many May Live 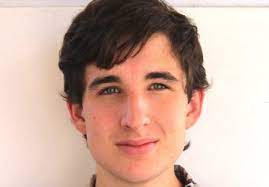 Andrew Kent Moore (1992-2012) - Martyr for the Cause of Life
Andrew (Kent) Moore, a friend and classmate of my daughter Stephanie at the very scholarly and Christ centered Thomas Aquinas College at Santa Paula just outside of Los Angeles, finished his sophomore year in the school's Great Books program.  This summer he participated in the pro-life Crossroads (http://www.crossroadswalk.com) walk across America that left San Francisco on May 11 and expected to arrive in Washington D.C. on August 11 for a pro-life rally.  Along the way, they attend daily Mass, share their message of life at parishes, and pray in front of abortion clinics.


It was foggy early in the morning of July 11 and Andrew's shift of walkers. wearing reflective vests, was plodding along, praying the rosary for the unborn while passing through Stilesville, Indiana, close to Indianapolis. Suddenly, Andrew Moore was hit by a car that apparently strayed onto the edge of the road. He died instantly. This hero not only gave up his summer for the cause of life, but his own life as well. May he leave a legacy that will contribute significantly to a culture of life in our country and inspire many to join this very noble cause.  Perhaps through this tragedy and his previous work, Andrew will have done more for the pro-life cause than most activists can do in a normal lifetime.  After all, it is not how many years we live, but how profoundly we live them.

According to Stephanie, Andrew was the most beautiful person she ever met. This kind and saintly youth with a maturity beyond his years, was discerning a possible call to the priesthood. He would be seen in the chapel praying, for example meditating on the stations of the cross. Andrew was very intelligent, particularly sharp in philosophy, and eloquent in classroom discussions about the great books, yet humble in helping his classmates during out of class study groups. As a friend and at dances and other social events as well, he was witty and pleasant.

During our visit to Thomas Aquinas College August 10-13, other students gave me additlonal observations.  Andrew was a meek person, who would never impose.  He gave lucid and insightful interventions in class.  He was so passionate about the Right to Life Movement that he would get everyone's attention at dinner in the cafeteria and give a pro-life announcement and ask for prayers for a pending bill in a state legislature or government, Congress, or the Obama Administration.

He would often be seen walking around Campus in the afternoon or evening praying the rosary either alone or with a couple of friends.  It would be a fitting memorial and legacy to have a daily rosary walk in his memory that would become a campus tradition under the stars of southern California at this very Christ centered college.  The climate is ideal for that all year round.  One of the rosary intentions would be of course for life from conception to natural death.  The students would be invigorated spiritually and physically.  It would be a wonderful break from study as the brain cells would be oxygenated and thus more efficient.

Andrew's mother is a classy lady, who called to thank Stephanie for helping to animate a spontaneous get together over ice cream with her and a few students.. Andrew's father, Joseph Moore refused to blame anyone for the tragedy.  He wrote the beautiful and eloquent essay below on his son that tells a lot about the person of this pro-life hero. His letter is special and portrays the best of the pro-life movement and what it is supposed to be as exemplified by Andrew Kentigern Moore. 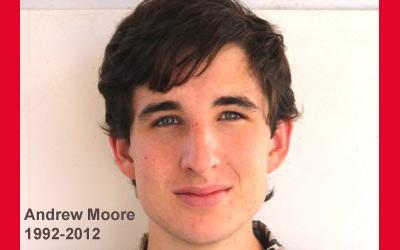 Millions of fathers have had to come to grips with the tragic, untimely deaths of a beloved child. I am no different, and no different in wanting my son remembered for the unique and good man that he was.
See: https://www.lifesitenews.com/news/joseph-moores-moving-tribute-to-his-son-andrew-who-died-during-crossroads-w

Millions of fathers have had to come to grips with the tragic, untimely deaths of a beloved child. I am no different, and no different in wanting my son remembered for the unique and good man that he was. Here are a few pieces of his story.

Andrew, our beloved son, was hit by a car while walking along an Indiana highway with Crossroads, a pro-life group that sponsors college students on walks across America each summer. He died instantly. In this modern world, we’d reflexively add that he died doing what he loved – a somewhat true but strangely self-focused way to see it. What Andrew loved was not, exactly, the pro-life movement. In fact, I can safely say he pretty much hated praying in front of the local abortion mill, and had a very hard time making himself say anything to the people as they walked by. He hated the occasional mockery and confrontations. He hated being there alone most mornings. There was none of that peculiar self-righteousness that is the hallmark of the secular protests us residents of the San Francisco Bay Area see, the patting of oneself on the back for sticking it to the man while hooting it up for the cameras. Andrew’s mostly solitary protests were not a party, and were hardly even a protest. There was no man to stick it to – only women faced with a terrible ‘choice’.

What Andrew did love was the Truth. Decades of deconstruction, of Orwellian ‘critical thinking, have succeeded in painting the love of Truth as some sort of disorder, as naïve and simplistic – Andrew, by some mysterious grace, was immune to this poison. While he might have been naïve and simplistic about many things, his intellect, by another mysterious grace, was profound and mature far beyond his years. His love of Truth lead him to a love of God, to a love of neighbor, to Thomas Aquinas College – and to untold lonely hours spent in front of Planned Parenthood. And to the walk that resulted in his being taken from us.

Once Andrew understood the truth, he saw no way he could escape spending hours praying on the sidewalk. Nor – and this is critically important – helping out at all the crisis pregnancy support groups in the area. He is well known and well loved by the people at Concord Birth Right and at the Gabriel Project, as he always showed up to help whenever they needed him. He knew that success was not defined by simply talking a women out of getting an abortion – success meant that he - and all of us – stepped up to help, to love that woman and her baby unconditionally and materially for the rest of their lives.

But on a much deeper level, he understood that embracing the truth meant, ultimately, embracing the Cross. There is a heavy price to pay for loving people. We will fail, and we will be ridiculed, and we will be spat upon by those we try to help. But that is nothing compared to the suffering when we succeed, when we will the good of the other for the sake of the other. The pain we then feel, if we are so blessed, is the slow death of our selves.

Some people have called Andrew a martyr. I can understand why, but it makes me very uncomfortable. In the popular imagination, a martyr gets dragged in front of a firing squad or thrown to the lions. Since Andrew’s death was nothing so dramatic, calling him a martyr risks making his sacrifice merely hyperbolic and therefore easily dismissed. At the same time, martyrdom is the correct and traditional way to describe the process of dying to one’s self for the sake of God through the selfless love of others. Understood in that way, Andrew’s life was a martyrdom, and I cannot feel he was cheated in any way by how short it was. For the rest of us, his death remains a tragedy and a mystery. May God have mercy on his soul, and console the inconsolable.

Email ThisBlogThis!Share to TwitterShare to FacebookShare to Pinterest
Labels: Making a Difference, Morality, Right to Life, Saints and Heroes, The Faith