(85) Have We Fathers Dropped the Ball? 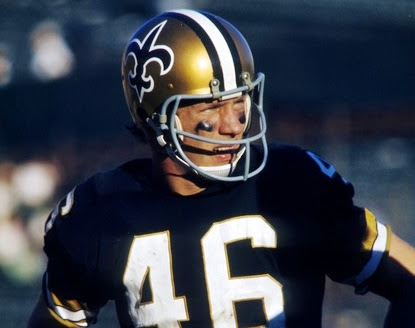 Danny Abramowicz in his prime with the New Orleans Saints
Note: Somehow this Blog #85 appears as having been posted on October 20, 2012.  In reality it was posted in June 2012.

Danny Abramowicz, former NFL All Pro and coach, founder of the Crossing the Goal Apostolate (see www.crossingthegoal.org), and host of the program for men by the same name on EWTN television (Th 9 pm, Sunday 6:30 pm, and Monday 6:30 am. See www.ewth.com) observed in his talk in the Steubenville Diocesan Men's Day of Renewal: “Men we have dropped the ball as spiritual leaders in the family, in the parish, and in the community”.

The case of the dead beat Dad is blatantly obvious.......takes no responsibility for the one night stand and birth of his child out of wedlock; the divorcee or guy who abandons his girl friend and neglects or avoids the responsibility of supporting his child; or regularly pays alimony, but has little or no contact with his child. Interesting is that most convicts in the prison system observe Mother's Day, but ignore Father's Day. Often the criminal has lost all contact with his abusive or negligent father and is bitter. Often he doesn't even know who his father is. A man or woman raised by a single mother is more likely to fall into crime, drugs, dropping out of school, severe emotional problems, etc. The situation most conducive to a child's later success is to be raised in a stable home with a mother and a father.

Have fathers in intact families also dropped the ball? If the father is lax about attending Sunday Mass and sometimes skips for no grave reason, how can he expect the kids to be faithful? If the home environment is more secular than Christ centered; if the family's values are more worldly than Christian, what can we expect of the kids? If the father defers responsibility for the spiritual formation of the kids and their education in the faith to his wife, CCD, or Catholic school, and the Confirmation class without recognizing the crucial role of both parents as the primary educators in the faith, what can we expect for the future strength and vibrancy of the Church? No wonder we have so few vocations to the priesthood and the religious life! No wonder we live in a morally decadent society!

Blessed John Paul's Father. In his book “John Paul II: A Life of Grace” Renzo Allegri gives an intimate glimpse of young Karol Wojtila's family life. The role and profound influence of his father, Captain Karol Woyila Sr. on his life and spiritual formation was crucial (see http://www.catholicdadsonline.org/posts/8460/pope-john-paul-iis-father/). Below are a few excerpts:

“He suspected that Lolek [Karol Jr.’s nickname] would be a special child. Parents often have these kinds of intuitions. The captain decided to dedicate himself to his son. No one could have helped, understood or guided the child the way he could. He rolled up his sleeves, pushed aside his own great sorrow and, in his usual, style, made a plan. For twelve years, . . . Karol Wojtyla Sr. was father, mother, friend, teacher, role model and playmate for Lolek. The two became inseparable. . . . He was sacrificing every moment of his life so that little Lolek would grow up well.”

“They lived in a wonderful atmosphere of mutual understanding and affection. Their days together were never boring, sad or melancholic. The captain was a very attentive, generous and selfless man, and he knew how to adapt to the needs of his son. Although he talked about history and literature, he also talked about sports, music and entertainment. Often father and son would go to the movies together, which Lolek particularly enjoyed. On Sunday, they would eat lunch together in a restaurant and take a long walk along the Skawa River.  They also played together.”

“Karol was an incomparable mentor of spiritual life for his son. Lolek’s schoolmates state that they would often see the two Wojtylas kneeling next to one another in the church, engrossed in prayer. It was a moving sight.” Allegri then quotes the Pontiff himself: “The mere fact of seeing him on his knees had a decisive influence on my early years. He was so hard on himself that he had no need to be hard on his son; his example alone was sufficient to inculcate discipline and a sense of duty. He was an exceptional person.”

And another time, the Holy Father wrote – “He was a deeply religious man. Day after day I was able to observe the austere way in which he lived. By profession he was a soldier and, after my mother’s death, his life became one of constant prayer. Sometimes I would wake up during the night and find my father on his knees, just as I would see him kneeling in the parish church. We never spoke about a vocation to the priesthood, but his example was in a way my first seminary, a kind of domestic seminary.”
The Father as a Priest and Teacher in the Family (see http://www.chandrakumar.net/The%20HusbandFather%20as%20Family%20priest.html). Until falling to idol worship in the desert, the Israelite father was very much a priest and had the privilege of offering sacrifices to God. The parish priest represents God to the people in his role as leader and teacher. He also represents the people to God. The father does the same in his family. Although only the ordained priest can offer the perfect sacrifice, i.e. say Mass, the father in the family leads family prayer as the rosary, grace before meals, and leads the family as a unit to Sunday Mass as a serious obligation. He, together with his wife, is responsible for teaching the faith to the children and forming virtue. They guide and they discipline. He is responsible for assuring that all members of the family are active in parish activities as adoration, devotions, youth group, serving the parish as altar servers, choir members, and ministries as well as to encourage frequent reception of the sacraments including monthly confession.

Scott Hahn observes that “One of the marvels of God's plan is that He has given fathers a priesthood and priests a fatherhood. Within the family, the father stands before God as a priest and mediator. Within the Church, the priest stands before his parish as a father. A priest's fatherhood is not merely metaphorical, it is something metaphysical. It is a supernatural participation in God's fatherhood and in Christ's high priesthood. How did Christ exercise His high priesthood? He became the New Adam, the father of a new human family in the Church. He thereby became the perfect image of the Father on earth.” See http://www.catholiceducation.org/articles/religion/re0647.html.
Leadership by Example is crucial. To a large extent the faith is caught more than taught as catechism answers to be memorized, however important. Practice what you preach; practice virtue. Live the faith. As a professor by profession, I have a tendency to preach too much and get turned off. Then I can scandalize when I'm uncharitable or lose my temper.....kids and even the neighbors within range. Then it becomes deformation instead of formation. Often I have had to struggle in balancing the demands of survival in my faculty position and family or apostolic activities in the Church and family. So as you see, I often drop the ball myself, but I am also trying to put the above principles into practice.
It is not enough to love, but to communicate that love.......by touch (be it a hug or a pat on the back), tone of voice, listening attentively, patiently giving help as needed, etc. Then it is more likely that the father will be emulated.

Consciously or unconsciously children, especially boys use us as models......for virtue as well as for vice. According to Abramowicz, “children love their mother, but follow their father” They need affirmation or approval for their self-confidence and self-esteem. Until proven otherwise, they look to their father as a strong figure whom they can trust. For the daughter, according to one pediatrician, the father is the most important man in her life. Her image of men is often determined by her father. He can have a great influence upon her developing a healthy sexuality.
Recovering Fumbles. Yes, we can juggle, drop, or fumble the ball and often do. But we can also recover the ball in mid-air or pick up the fumble on the bounce and make sizable gains by learning from our mistakes, working on our weaknesses and faults, seeking the graces of confession, becoming closer to God, praying for his help, and plowing forward. St. Joseph, pray that we fathers become more effective spiritual leaders, teachers, and priests in our families in raising our children for eternity..
Posted by Paul Sebastian at 9:31 AM

Email ThisBlogThis!Share to TwitterShare to FacebookShare to Pinterest
Labels: Family, The Faith