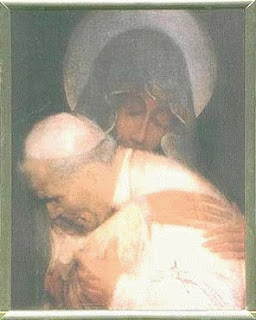 Today April 2 marks seven years since our beloved Pope John Paul II died on the eve of Divine Mercy Sunday 2005 which he himself designated and received his heavenly reward in the presence of our Lord and his mother whom he loved so much. A year ago on May 1, Divine Mercy Sunday he was beatified as shown in the picture on the right which we saw on EWTN television.

As part of my work in Peru as a Papal Volunteer, I wrote many articles for the local newspapers on religion, education, science, economics, and community problems. Peruvians celebrate June 29 as “El Dia del Papa” or “The Day of the Pope as a national holiday. Thus it was very appropriate for me to write a couple of articles every year on the social encyclicals of the Popes.......”The Popes, Precursors of Social Change” beginning with Pope Leo XIII's landmark encyclical on the “Condition of Labor”. Each succeeding pope would update and augment it without contradiction according to changing problems and conditions. The basic principles of Catholic Social teachings do not change, but their development and applications do change with the times.

In 1978 I had written about Pope John Paul I before he died a month after becoming Pope. To everyone's surprise, Karol Cardinal Woytila, the Archbishop of Krakow, Poland was elected and I wrote about him. Being very happy for the Polish people and my friends of Polish heritage as Fr. Joe Kowalczyk, little did I know that ten years later I would have a Polish wife, Jadwiga Gajda. In 1981, I wrote a summary for the Diario Correo (Arequipa-Peru) of Pope John Paul's second encyclical “On Human Work”, which is very philosophical, showing that man cooperates with God in creation which is ongoing. He used his experience as a quarry worker to develop a philosophy and theology of work and write it.

In September 1987 the Pope visited the United States (his 3rd of 5), one of five during his papacy. When he was in Detroit Friday evening and Saturday, September 18-19, Jaga and I, while students at Kent State University,were part of a busload of people from a Polish church in Cleveland. On Friday night we hoped to have a glimpse of him upon leaving Blessed Sacrament Cathedral. On Saturday morning, he spoke in Hamtramck, an ethnic Polish section of the city. John Paul II spoke in Polish without notes in a large square filled to capacity. Being his language of birth, he spoke with great fluency and energy.  It was powerful and communicated the strength of his character and personality.  The Pontiff was 67 years old at the time. All I could understand was "Solidarsnosc" or Solidarity.......that people must work together and thus can exert great power. "Solidarity must take precedence over conflict." And "from the beginning," he said, "I have known Hamtramck." He had visited Hamtramck in 1969 and in 1976 SS. Cyril and Methodius, the only Polish Catholic seminary in North America. He was Archbishop Karol Wojtyla at the time, becoming Pope in October 1978.


In the afternoon of the same day, Jaga and I were one of the 70,000 who heard the Vicar of Christ speak at Hart Plaza in downtown Detroit from a small bullet proof tower shown above. People were packed at the intersection of two streets on the Detroit River, separating the U.S. and Canada. To keep us together, our guide would raise a red and white umbrella, the Polish national colors. The Pontiff spoke about the positive aspects and the dehumanizing negative effects of new technology on human beings, a topic appropriate to Detroit 's auto workers.

Sunday morning he said Mass at the Silverdome, the home of the pro football Detroit Lions.  We had to go through metal detectors, have our packages inspected.......the whole bit.  The stadium was filled to capacity, 90,000 in the stands and on the field. The Papal Mass, concelebrated with 100 priests with the 1200 voice choir and the procession were all beautiful. He spoke again of the people who work, each being a "human being not a mere instrument of production. Central to the church's teaching is the conviction that people are more important than things," he said. The pope himself was a worker. There were hundreds of priests available to distribute Holy Communion in different parts of the stadium. We had a great view from the second tier. Finally, John Paul departed in a helicopter parked next to the stadium. He expressed his gratitude for the hospitality shown him and hoped "this hospitality will bring deeper unity to the church of the Christian people of the United States. I hope and I wish that this visit will be spiritually fruitful. Thank you very much."

What a contrast between the vigorous and energetic Pope in 1987 and 18 years later when he died as age and Parkinson's Disease finally took its toll at the age of 85! He suffered greatly, but showed us how to suffer and put his Theology of suffering into practice.  That is uniting our cross with the Lord's cross and offering it up as a dynamic prayer for the Church, the missions, a better world, our loved ones, and for the poor souls in Purgatory. His encyclical on suffering together with his accomplishments and links to many of his other writings can be found in our Blog #10 at this same website, www.paulrsebastianphd.blogspot.com. When reporters asked Blessed John Paul about retiring when he was about 80 years old, his answer was: "Did Christ come down from the cross? In other words he would continue to serve until the Lord called him in death. His mind was sharp until the end and he continued to be one of the greatest popes of all time.

Our Family. The next year, 1988 Jaga and I were married and we named our first child in 1989 oldest son, John Paul. He has a wonderful model to follow. May our John-Paul, now 23 years old and soon to graduate from Ave Maria University with a major in Math and Economics, indeed follow this wonderful model in his pursuit of the will of God for his life.

Throughout his Papacy, our family followed many of Pope John-Paul's missionary trips around the world on EWTN Television, particularly his visits to the United States in 1993 and 1995, Cuba in 1998. the Holy Land in 2000, etc.

In 2006 Jaga and the four kids went to Poland (I joined them later) and went by train and on foot with Janusz and Maria Pozoga to see John Paul II's successor, Pope Benedict XVI in a huge field. They barely saw him amidst the tens of thousands of people. What they did see was mostly a large television screen of his papal Mass. Pope John Paul visited his native Poland no less than nine times to keep them faithful to the Lord. One of his greatest fears was that a free Poland would follow the lead of the rest of Europe and be victimized by materialism and secularism. In my year of teaching there, I saw evidence of that and kept telling my students that secularism is the greatest threat to Poland in all of their fascinating history –even more than Nazism and Communism-- because it could destroy Poland if the people do not remain faithful.

While teaching in Kielce, Poland in 2007 and 2008, I would pass a beautiful statue of Blessed Pope John Paul almost daily and say a prayer to him asking for his prayers that I be an effective apostle of the Lord and that I follow His will, going wherever He sends me and whatever mission He gives me.

During my time as Professor of Management at the University of Rio Grande, I would bring in some of his teaching on human dignity and twice as Professor Emeritus as a panelist for forums on human sexuality.

In 2009 or so I had a small part in promoting the St. Louis Parish Hall. When it was finally completed –we're still paying off the debt--, it was named the John Paul the Great Parish Center.

Last year at the University of Rio Grande Catholic Newman Club, I gave a class on the accomplishments of Pope John Paul II. It is also Blog #10 on this website.

In Our Extended Family the son of my cousin Martha, Fr. Thomas Loya, who married us, was very much influenced by Blessed John Paul II. As a seminarian in Rome in the early 1980s he heard a number of his 129 talks at weekly general audiences on the Theology of the Body. Fr. Tom was fascinated and deeply impressed by the Pontiff's teachings on the beauty of human sexuality as God intended (See my own Blog #71). He learned more about it and eventually became a recognized world authority on the Theology of the Body and now gives talks on the subject all over the United States and abroad.
You can see some of Fr. Loya's teachings and other information on the subject on the website of the Tabor Life Institute at www.taborlife.org, which he founded. His bio and article on him in regard to the talk that he gave at the 2011 Steubenville Diocesan Men's Day of Renewal may be found on Blog #35 on this same website. Some of his articles are also published on our Conference Blog which promotes men's spirituality at http://diosteubmen.blogspot.com as Blogs #25, #26, and others in the future.

Fr. Tom was photographed with Blessed John Paul II at least twice (about 1980 and about 2000). His mother gave us the latter photo which we have in our living room. In April 2011 his parish, Annunciation Byzantine Catholic Church in Homer Glen, Illinois sent him to Rome to witness his beatification, which our family saw on EWTN Television.
Frequently, EWTN Television shows movies on the life of Blessed John Paul II, which I like to watch each time. They are available at www.ewtn.com. Clearly Blessed John Paul has had a significant role and influence in our extended family.

Email ThisBlogThis!Share to TwitterShare to FacebookShare to Pinterest
Labels: Our Family, Saints and Heroes