(55) Our Lady of Guadalupe I: Binding the Americas Together

AMDG
OUR LADY OF GUADALUPE: BINDING THE AMERICAS TOGETHER
(Published in Papal Alert (Archdiocese of Baltimore), Vol 2, No. 2 (Dec. 1965), p 2) 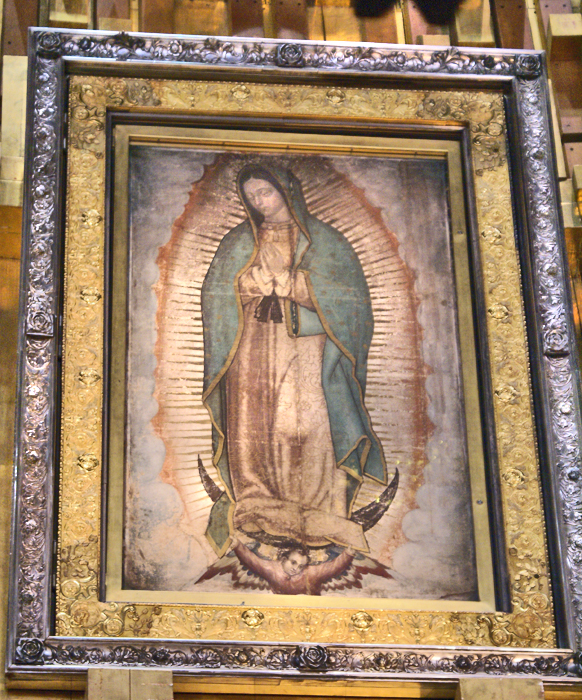 The authentic tilma of Juan Diego on which appeared the image of Our Lady of Guadalupe behind the main altar of her shrine in Mexico City.  The untreated cloth should have deteriorated in about 15 years, but remains intact and in excellent condition almost five centuries later.
On April 1, 1965, I was sent to Mexico City to finalize my language training for one month before finally arriving in Peru on May 1 as a Papal Volunteer for Latin America (PAVLA). As Mary would have it, she made sure that I be placed with a family in a neighborhood about a fifteen minute walk from the great shrine of Nuestra Senora de Guadalupe (Our Lady of Guadalupe). It was one of the most beautiful experiences of my life. I went there every day. It seems that since my mother and I dedicated our lives to Mary when I was in 7th Grade (about 12 years old), I seemed to stumble on one Marian shrine after another all over the world, especially in the Americas. I wrote a series of two articles from Lima, Peru May 1965 while getting my papers arranged with the Peruvian Government and arranging for teaching at the Universidad Catolica de Santa Maria in Arequipa, Peru's second largest city. The first article of the series is below.