A Glorious History, But a Crisis in Vocations

It was a wonderful experience to visit the Maryknoll Fathers and Brothers Center (See www.maryknoll.org and www.maryknollsociety.org), located on a knoll just outside of Ossining-NY on the east bank of the Hudson, an hour's train ride from New York City. The occasion was the 50th Anniversary of the ordination of Fr. Joe Kowalczyk with whom I worked in Arequipa-Peru. Fr. Joe was an electrical engineer, working for GE in Schenectady, when he received the call to become a priest and a holy priest at that.

He spent most of his time in Peru, from the high Altiplano on Lake Titicaca, the highest navigable lake in the world, half way down to Arequipa in the Andes, and all the way down to Tacna on the Pacific Ocean. He utilized his electrical background to teach a course in Physics at our Universidad Catolica de Santa Maria and communicate with friends and family with his ham radio before the internet and when it was very expensive if not impossible to call the United States. Currently, he helps out in parishes and promotion from a Maryknoll retirement community in Los Altos, a little south of San Francisco. The Maryknoll Fathers and Brothers have been serving God and His people for 100 years and Father Joe played an active part in that great mission for half of that time. Thank you Father; thanks to all Maryknollers living and dead.

Jaga, Stephanie, Joseph, and I (John-Paul and Naomi were in Chicago working) visited at the best possible time. We not only attended the big Jubilee Mass on June 26, but as an added bonus the Centennial Mass of the Maryknoll order, on June 29, the feast of St. Peter & Paul, the first missionaries. What a privilege! A gift from God which we did not anticipate!

It was 1911 and the American Church, after centuries of dependence upon foreign missionaries, were finally able reciprocate and send their own missionaries. Fr. James A. Walsh and Thomas F. Price organized the American Mission Society and sent the first group to China. Thus the buildings of the Maryknoll Center have an oriental flavor to its architecture. Bishop Francis X. Ford, spent two years in a Communist Chinese prison and died there in 1952.  He is one of nine Maryknoll Fathers who are recognized as martyrs, including Fr. Capadanno mentioned below.  Also included is Fr. Gerald Donovan, born in McKeesport, Pennsylvania, across the river from my hometown.  He was kidnapped and murdered in Fushun, Manchuria (China) in 1937.  Bishop James E. Walsh spent twelve years in a Communist jail until released in 1970.

Below are the founders of Maryknoll Fr. James A Walsh and Fr. Thomas F. Price at the Eucharistic Congress in Monrteal, Canada where they discussed for the first time the founding of a Catholic foreign mission Seminary. 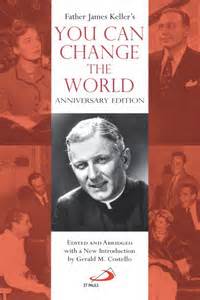 It was gratifying to see and meet so many veteran missionaries celebrating 25, 40, 50, and even 60 years of service to God and His Church.......having taken literally Christ's command: “Teach ye all nations, blessing them in the name of the father, the son, and the Holy Spirit”. It was a joy talking to and personally thanking veteran missionaries of Peru and South America, Central America, Africa, and Asia.......especially the many retired priests residing at the Maryknoll Center and its nursing home. They literally gave their lives to Christ and His Church.

Passing through one long corridor, I noticed on one side a mini Hall of Fame, pictures of noted Maryknoll missioners of the past. They included the founders; martyrs for the faith in China; Fr. James E. Walsh who spent much of his life in a Chinese jail; and Fr. Vincent Capodanno, a saintly marine chaplain, who was killed in a firefight in Viet Nam while ministering to one fallen soldier after another. Posthumously, he received the Medal of Honor, the military's highest honor and his process for canonization is advancing. (See Blog #31 and www.VincentCapodanno.org).

On the other side are photos of the graduating ordination classes. At its peak in the 1950s and 60s, the Maryknoll Center had a minor and a major seminary with ordination classes of 60 or so priests.  However, in recent years, seminary training is outsourced although much training is still done there, including lay missioners. The ordination classes have dwindled to 4, 2, and even 0. This struck me deeply. That night, I couldn't sleep, thinking: “Who's going to replace all of these retired priests living at the Maryknoll Center and in the Nursing Home? Now there are more retired priests than active missionaries in the field. The situation is desperate! What can WE do?

Each one of us must do his/her part. We have to pray and pray hard. We have to promote and encourage vocations in our parishes and in our families. As Christ said to St. Francis, “Rebuild my Church”; we have the same mission. Vocations come from holy families, from holy and dynamic parishes. We, each one of us, must get back to fundamentals in our families, parishes, schools, and seminaries.....frequent reception of the Eucharist, monthly confession, Eucharistic adoration which often transforms parishes, giving of ourselves to each other by serving and volunteering (the pastor can't do it all alone), spiritual reading, utilizing Catholic television and radio. And don't forget our Mother Mary, who nurtures the faith. Daily rosary is powerful.

Crucial is a strict faithfulness to the Magisterium of the Church.......the teaching authority of our Pope, bishop, and pastor with the humility to obey even if we don't agree. Dialogue, yes; but somebody must have the last word. We must have the faith and trust that God appointed them and the Holy Spirit works through them. We can't deviate in every which direction and “do what is right in our own eyes”. That quote happens to come from the Bible account of Sodom and Gomorrah. That mentality creates chaos.......just what the evil one ordered.

Each one of us must have a missionary spirit (See Blog #5). We must be willing to evangelize in little ways.......by prayer and example, by word and deed. We cannot retreat from opportunities to talk up the faith without imposing to drifting and fallen away Catholics; to stand up for what is morally right. Most of us in our current careers and professions cannot work full time for the Church. But each one of us can volunteer a few hours per week in a parish ministry or activity. When we retire from our jobs, we can do much more instead of becoming couch potatoes. Each one of us can help our missionaries, such as Maryknoll, with part of our tithing to the Church and charities. The sick can pray and offer their crosses to God as a dynamic prayer. Everyone can play a very important part with the active missionaries in the Body of Christ.

Across the Hudson River and a little north is the United States Military Academy, West Point that trains elite officers to defend our country anywhere in the world. On the east bank is Maryknoll that trains worthy young men to be leaders in a spiritual army to be God's instruments in spreading the Gospel throughout the world and bringing people to salvation in heaven. May Maryknoll always be a worthy counterpart to its neighbor on the west bank.
Posted by Paul Sebastian at 11:56 PM

Email ThisBlogThis!Share to TwitterShare to FacebookShare to Pinterest
Labels: Missions